Young Westwood Team Tightens The Race in 3A-15 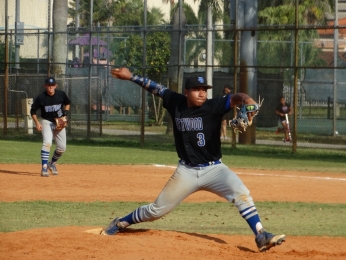 Kenneth Prado shut the door and drove in the decisive two runs.

Baseball is a lovely sport. One where the old-school experts collide with the new school of supporters. Sabermetrics against the eye test. Experience against the new wave. Changes are hard to accept, and like most things the quick band-aid removal method may be the best transitional method.

Coming into this season and after winning a state championship, the Westwood baseball team had the lowest of expectations. The Warriors band-aid was a complete renewal, and after having some deep veteran clubs for years, now they affronted the season with a newer crop of players that needed some serious coaching.

“We came into the season with only two guys with varsity experience, so we took our lumps at the beginning of the season since we didn’t have the experience,” Warriors Manager Julio Andrade said. “Some of them were nervous, we didn’t know what to expect. They are growing because they are listening, they are trusting each other, and they are playing as a team. No one is worried about being the star, they just want to win.”

The Warriors have come full circle now to best their biggest obstacle in 3A-15 leaders Hialeah Educational, whom they beat at home 4-2 Monday thanks to an RBI hit from Kenneth Prado. This result has made things interesting, since there is a possibility of a four-way tie between them, Sagemont, and Dade Christian. Andrade couldn’t contain himself and was showing the signs of some happiness at the end of the ballgame.

“I am ecstatic, that’s a good team we just beat,” Andrade said. “From the beginning of the season, they have been the best team in the district. We’ve known that in order to achieve our goals for the season, we had to beat them.”

Hialeah Educational (8-8) woke up leading the district by a wide margin, but in this moment with a 7-2 district record they could end up in fourth place. On the other hand, Westwood (10-6, 6-3) can still dream with the first seed as they still have a meeting with the Bulldogs scheduled for Thursday that could catapult them onto the top.

On the afternoon, the Bulldogs Manager Manuel Pazos was aware of the importance of the ballgame. Due to that, he gave the ball to his ace Marc Anthony Suarez, who leads the district in wins and strikeouts, hoping for a win that would have clinched the district.

The Warriors sent freshman Mathew Mejias to face him.

For the first couple of innings, it looked as if Mejias was in trouble, but with some help from his defense he was able to cruise through four innings to get a quality start only allowing one run. 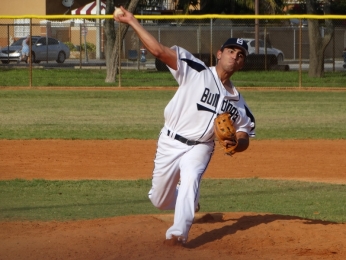 Suarez was completely different. He came out firing and attacking the strike zone with his fastball and split-finger. With a one-run lead, in the third inning Suarez faced the top of the Warriors lineup. Kenny Goodrich started things up with a double, the first hit the starter surrendered. After a quick out, the third batter Brandon Nayor came to bat. He was quick to react to a split-finger that was left hanging on the plate and drove it over the fence, giving Westwood the lead.

Nayor was 2-for-3 and also stole second base to put himself on scoring position in the seven to score on a great display of base running.

“It feels great to hit it,” Nayor said of his homerun. “Especially to hit it at the right moment. We been trying to focus on getting better at the plate and more aggressive.”

Tony Gonzalez tied the game in the fifth as he drove in Alex Curbelo, and Gonzalez finished 3-for-4 on the night. After surrendering this run, Warriors reliever Kenneth Prado was able to shut down the Hialeah Academy lineup for the rest of the game.

Both teams reached the seventh inning tied and with no intentions of letting the game get away. It was Westwood who fabricated the runs. They put together a couple of runners on that set things up for Prado at the plate. The reliever hit a bullet to the left side that escaped the reach of the Bulldogs third baseman, scoring the two most important runs.

Suarez, who surrendered the four runs, said that he had a bad day. He made a couple of mistakes and Westwood punished him. According to him, not every game a pitcher can be dominant. He has to deal with the great hitters, those are his 50-50 chances. He said that the key to being a good pitcher is retiring the average batters.

“I was just mixing my pitches, following what my coaches and my catcher was telling me,” Suarez said. “At the end of the day you have to listen to your elders.” 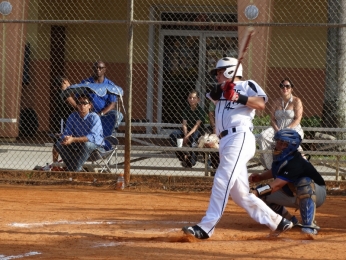 The catcher Tony Gonzales hitting a ball deep to center field that drove in a run.

Hialeah Academy still appeared to be a team capable of playing better ball. They left 11 men on base, committed some mental and base running errors. Pazos was not happy with the performance of his team.

“The other team really took advantage of all our mistakes,” Pazos said. “We were really bad on the bases today, and we didn’t get any timely hitting. We should have scored at least four runs in the first couple of innings. It was a great game. We lost, because they were more clutch than us. They came up with the big hit, something we couldn’t do.”

Westwood now controls its own destiny.

“I’m really proud of my team. Not only because we won, but because the boys are buying into the plan,” said Andrade. “They are starting to do things the way we have been coaching them to do it. They have good approaches at the plate and they are staying positive after things are not going their way. I’m proud of them, not because they are winning; I’m proud because they are growing, maturing, and doing things the right way.”