American Heading Back To States After 2-0 Win Over Dwyer

Written by Anthony Uttariello on May 10th, 2014 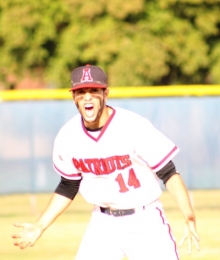 Andy Figueroa celebrates after recording the final strikeout of the game.

The different circumstances showed throughout the game, as the Patriots played loose and carefree, running out to a 2-0 lead, and then watching as Alex Blanco and Andy Figueroa combined on a shutout that sent American back to states for the second straight year.

“Last year when we walked off that field in Fort Myers, it hurt,” said American senior Kevin Williams. “It hurt a lot. And our goal this season was to get back there and finish the job. It feels great to be regional champs again, but our work is not yet done. We still have two more games to win.”

Manager Ricky Gutierrez has made a habit out of taking the Patriots deep into the playoffs since he took over the program, and he is proud of how this team responded after last year’s state semifinal loss.

“Last season, we had a lot of seniors, but the guys that are still here remembered what it felt like to come up short,” said Gutierrez. “They have worked very hard this year, and they are a great group of kids. I am happy that we won today and we get another shot up at states.”

The Patriots scored their two runs in the second inning off Panthers freshman starter Tyler Ahearn. Kris Perez hit a one-out infield single, and promptly stole second. After a bunt out, Ronnie Williams drove in Perez with a base hit. Edison Cabrera then walked, and Kevin Williams singled in the Patriots second run.

That would be all that Blanco needed on this day. The senior went six innings, allowing only two hits, while striking out five. He faced only three batters over the minimum in his six innings of work. 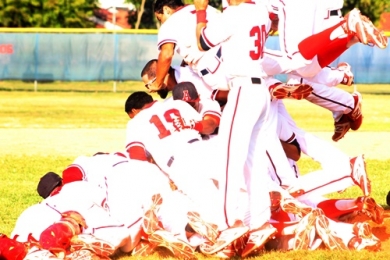 “He’s been big all year,” said Gutierrez. “We decided to make him one of our starters when we had Mikey go down, and we needed that big second guy behind Ronnie. He has responded and done an incredible job. I tip my hat for what he has done for us this year.”

Dwyer’s freshman was equally impressive on the afternoon, allowing only the two second inning runs. It was not the type of performance that would be expected from a freshman pitching in a regional final.

“He did a great job,” said Panthers Manager Frank Torre, of Ahearn. “For a freshman to come into this type of environment in this big of a game and perform like he did, you can’t help but be proud of him.”

After six shutout innings, Gutierrez decided to go to his closer, Figueroa, in the seventh. Despite a lead-off walk, Figueroa was able to slam the door shut, striking out two of the final three Dwyer batters.

“We had a lot of focus throughout the whole week getting prepared for this game,” said Blanco. “We prepared both mentally and physically. We knew they were a very good team, and we had to be ready. I didn’t really have my best stuff today, but I was able to throw strikes and let my guys back me up on defense. This is a great group of guys, and credit also needs to go to Coach Gutierrez and the rest of the coaching staff. They had us ready.”

American played an aggressive brand of baseball when they reached base, stealing three bases, while also getting thrown out twice.

“That’s how we play,” said Gutierrez. “We like to apply pressure. When we get on, we are going to run, and we are going to bunt. Anything to keep pressure on the other team. They were a good opponent today. They were well coached and my hat goes off to them for the season they had.” 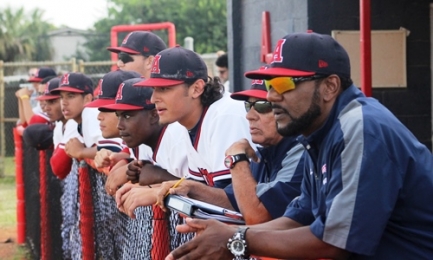 All business for American on Friday.

For Dwyer, not many expected they would make it this far after starting the season with two losses. The growth, however, left a lasting impression on Torre.

“This is probably the best team that I have coached,’ said Torre. “Other teams may have had more talent, but none worked as hard and were as dedicated to getting better as this team. To go from 0-2 to one game from states, it really is something special.”

American will now move on to the state semifinals on Friday against Chiles out of Tallahassee. Overall the club brings a roster full of players who have gotten their taste of that environment and are ready for the challenge.

“We’re not going to do much different than last year in terms of preparation,” said Gutierrez. “Hopefully this time we can get the job done up there.”