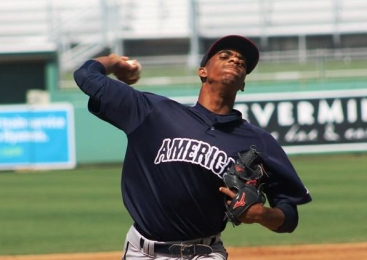 Ronnie Williams pitched a gem in his final career outing.

Pitching has been a big factor in the success of the American baseball team this season. The players build confidence off of watching their bevy of talented hurlers deal and mow down the opposing hitters.

In Friday’s Class 7A state semifinal, the Patriots lineup rewarded all of those efforts throughout the year by erupting for a big day at the plate.

Every starter reached base to pave the way to a 7-1 win over Chiles, in a contest played at jetBlue Park in Fort Myers. Behind the strength of the great run support, the squad’s ace pitcher Ronnie Williams cruised to the victory on the mound, pitching into the seventh inning in his final high school start.

“Our pitching has been carrying us all year, Ronnie Williams, Blanco, Figgy and the other guys. But today we had great at-bats and that was the key,” American Manager Ricky Gutierrez said. “They walked us and we got hit by pitches, but we got in crucial situations. Jake Norman came up clutch, Matthew Ruiz came up clutch; we just had clutch hits and that’s what I think did it. To give a four or five-run lead to Ronnie Williams, it’s tough with a guy like that on the mound.”

The Patriots (25-5) will now face East Lake Saturday evening for a chance to bring home their first state title in school history. The Eagles (23-8) advanced to the championship following an epic 1-0 victory in 13 innings in the other 7A semifinal Friday night, in a contest that matched the longest game ever played in state semifinal history.

Making its third state Final Four appearance in the past five years and just one season after being shut out in the same state semifinal round, the club made it their goal all year to get back to this point and erase that painful memory. The team has been on a mission all season long, refusing to falter in their pursuit of a state title that is now so close for the taking. 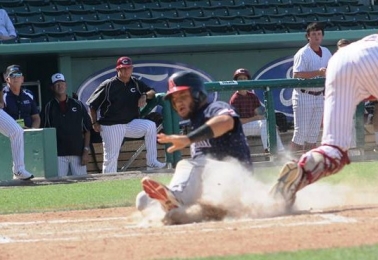 Matt Ruiz scores the first run of the contest.

American jumped onto the scoreboard in the top of second inning, ending a 10-inning scoreless streak in the state tournament that dated all the way back to 2010. With two outs, Matt Ruiz singled through the left side of the infield defense, then advanced to second on a passed ball and raced around third to score on an RBI single from Jake Norman.

“The first thing I thought of was we finally got a run in,” Gutierrez admitted. “Last year we got shut out, but it was good to feel good and get that one run in and keep it going. With Chiles, we knew we were coming in to face a great team and Ronnie Williams had his stuff and he did a great job.”

It was also the start of a big day for Ruiz, who went 2-for-3 and reached base three times, while knocking in a pair to do his part. While the left fielder has not always gotten the attention and recognition for his efforts, like all the other members of the club the only thing that has mattered to Ruiz is getting the win each time out. It was not the first clutch performance Ruiz has delivered this year, and he is just happy to do his part.

“We have one goal, and that is to win a state championship. The other word is history, just to be a part of history,” Ruiz said. “Coach Rick, from that Killian interview before that week with that big game, was like ‘Matt is an unsung hero and people don’t talk about him a lot’. I just wanted to do what I’ve been doing all year, which is being the quiet guy and doing the small things, scoring, getting base hits and just trying to help the team win.”

After the Timberwolves (23-7) evened the game up in the bottom of the second, the Patriots broke the contest open in the top of the third. The Chiles pitchers struggled with their control and American capitalized. Kevin Williams, Eric Gonzalez and Romy Gonzalez all drew walks to load the bases, and Steven Alvarez was hit by a pitch to push Kevin home with the decisive run. Ruiz followed with an RBI walk, and Kris Perez landed the fatal dagger by sitting back on a 2-1 offering and rolling it up the middle for a two-RBI base hit to put his squad up with a 5-1 lead.

American added two more insurance runs in the next frame, as Kevin Williams and Ruiz delivered big RBI singles to extend the lead and make Ronnie William’s job that much easier. 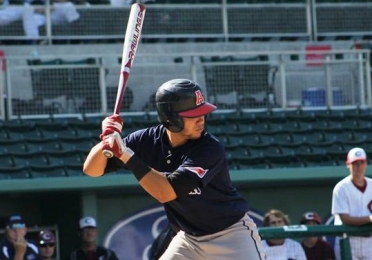 Every starter reached base for the Patriots.

“The whole lineup was clicking,” Ruiz said. “We got walked and we got hit by pitches, but we got six or seven hits and four of those hits were key hits and we scored runs on them. What I saw today is we limited our strikeouts. We usually strike out a lot, but we limited them and we put the ball in play and we made the defense work. Like everybody says, if you score in that first inning you’ve got a good chance of winning.”

Pitching on the MLB mound of jetBlue Park for the second time in his life, Ronnie looked like a man completely at home. The right-hander was poised and determined and, after suffering the loss a season ago to MLB-draftee Tyler Danish and his Durant squad, he was driven to write his own better ending this time around. His teammates staked him a big lead and there was no way Ronnie was going to let the Timberwolves fight their way back.

“Coming back my second year I had a lot more confidence,” Ronnie said. “I knew the field and I just went out there and played my heart out and my team backed me up. All the way up here the guys were saying ‘there is no Tyler Danish. Ronnie is our Tyler Danish’. So I went out there and I said that I’ve got to be Tyler Danish and try to match his numbers. I just pitched my heart out. It was so great I actually cried. It was my last time pitching in this Patriots uniform and it feels good. I’m really proud of my team. I’m glad I went out like this.”

Ronnie scattered four hits and two walks, and also hit two batters. He recorded three strikeouts and consistently pitched to contact and forced the Chiles batters to swing at his pitches and fall victim to the strong defense played behind him. He saved his best stuff for when he needed it most, such as when he struck out the final batters to strand two base runners in the bottom of the fourth.

“Ronnie has been great all year,” Gutierrez said. “I’m going to miss him and we’re going to try and send him out with the big one. He’s done a tremendous job for us this year and without Ronnie Williams we would not be where we are today. Just his performance today, he pitched outstanding and I tip my hat off to him. I wish him the best of luck in his career.”

Gutierrez relieved Ronnie with one out in the bottom of the seventh, turning to Mike Rodriguez to close things out. Rodriguez is a guy who has been injured all year and the coaches wanted to get his feet wet just in case they need him for Saturday’s championship game. If the Patriots run into trouble they wanted to know they have him ready by seeing how he was feeling out there on the mound.

“Mike hasn’t pitched in a while, and he wanted in,” said Gutierrez. “I also wanted to get Ronnie out and see Ronnie off and let his family and his fans give him a standing ovation coming off the mound. Mike said he felt great, and he said felt weird out there. His ball was jumping off his hand, and I told him tomorrow if we need him we’re going to him.” 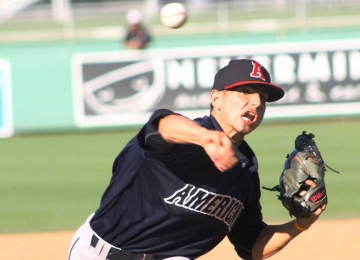 American will give the ball to Alejandro Blanco to make the biggest start of the season. Blanco has proven a worthy and capable pitcher as well this season, full of poise and great command of his pitches. The club has a strong bullpen behind them, and Rodriguez only adds another big element to that equation.

All year long the team focused on doing the job every day so it could get back on the bus and come back to the state tournament. When that goal was finally realized and the squad made the trip across Alligator Alley Thursday, the team was finally able to look ahead at the ultimate goal of winning the first state championship in school history.

“The ride up was fun,” Ruiz admitted. “We all came up in minivans, but we don’t even care. We can walk up here, because it’s just one goal and that is to win it all. It wasn’t just about getting up here; the goal is to win it all.”

The Patriots felt the sting of defeat so close to that goal last season. Now they have a chance to write a better ending, not only for themselves and for their fans but also for those departed seniors from last year who also poured so much heart and dedication to lead the team in this direction. It is a chance to reward the extended Patriots family, and the best way to culminate a season that has taken so much hard work and dedication to bring it this far.

“You have to tip your hat to them, because it’s a long season,” Gutierrez said. “Miami has a lot of great competition and you have your ups and downs throughout the season. You just have to stay even-keeled, and at the end it seems like our team always peaks. This year we just want to finish it.”