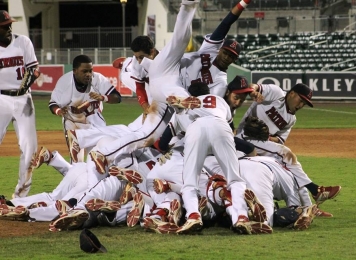 The Patriots pile up after winning the 7A state champiopnship.

It couldn’t have been scripted any better way.

The American baseball team has been on a mission all season long to win a state championship. With the final stop on that long journey finally here, there was no force out there that was capable of stopping the Patriots.

All season long the players have developed their identities and learned how to thrive through each individual role. In Saturday’s Class 7A state championship game at jetBlue Park in Fort Myers, everything came together and the Patriots achieved their dream by winning the state title with a 5-2 victory over East Lake.

It is the first state title in program history, after two previous trips over the last five years fell short of that dream. It was success paved through commitment, unity and accountability. American (26-5) played to all of its strengths, and the team won by staying true to what has made each member of the squad a part of the success all season long.

“It’s a great, great feeling, especially for these kids,” said American Manager Ricky Gutierrez. “I am pretty much speechless. We’ve said it, we’ve preached it and we came out and did it.”

One day after team ace Ronnie Williams helped pitch the team into the title contest, it was fellow senior Alex Blanco who toed the rubber for the biggest game of his high school career. The right-hander proved up to the task, going five and two-third innings while allowing one earned run on three hits and a walk. Blanco pounded the zone to record strikes on 51 of his 79 total pitches, attacking batters and picking up six strikeouts on the night. 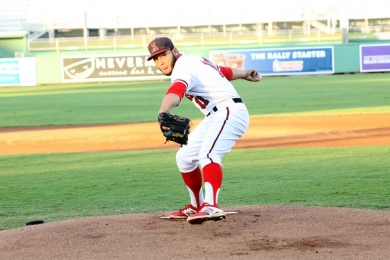 Alex Blanco got the start and the win for the Patriots.

“It’s crazy; I have never had anything like this,” Blanco said. “I came a long way from my freshman year. This is my first year having a team, and this is my family. I grew up playing with a lot of them and I am glad to end my career playing with them. It’s unbelievable to be able to win states and have the great season that we had with the team we had, and we pulled through.”

Blanco did not allow a run until the sixth inning, and faced just one batter over the minimum through his first five innings of work. Meanwhile Eagles starter Ryan Wall matched him early on to also keep the game scoreless and give East Lake (23-9) just as much opportunity to jump out in front. Yet while Wall was solid, Blanco was unwavering in his approach to realize the moment and pitch the greatest game he had in him.

While many pitchers in the game all the way up to the big leagues often take a little while to settle in, Blanco was able to hit his groove very early on. The fourth pitch he threw to Eagles leadoff hitter Brad Deppermann was lined back at him, and Blanco snared it into his glove for the first putout of the contest. After that, Blanco was locked in.

“I’ve been waiting for this my whole life, and I put together a great season to show Coach that I deserved this,” Blanco said. “I came out here and did my job and I picked up my team in the early innings and they picked me up in the later innings, and we pulled through. It’s all a team thing; it’s not just one person. It’s a whole team.”

The Patriots offense erupted in the fourth inning in their second trip through the order to score all the runs the club would need. Kevin Williams reached on an error to start the frame, but was then erased on a fielder’s choice that landed Eric Gonzalez on first base. Eric wasted little time in breaking for second base and stealing the bag, and then the speedy second baseman continued to put those legs to work by racing around third and across the plate when Romy Gonzalez jumped on a 1-2 pitch and drilled it past third base for an RBI double and a lead the Patriots would never lose.

That was just the beginning. Steven Alvarez lined an RBI single through the left side to plate Romy, and then gave way to courtesy-runner Andy Figueroa. Figueroa swiped second base and Kris Perez worked a walk to add another runner on the base paths. Jake Norman then completed the big frame by crushing a shot deep off the Green Monster wall in left field, sending both runners home with the two-RBI double.

“You’ve got to give East Lake’s starter lots of credit. He was no-hitting us through four and I was getting edgy,” Gutierrez admitted. “I was like, ‘we’ve just got to get somebody on so we can start it’. Once we can get a couple guys on, that’s been our game. It’s funny how we won this game because that’s how we’ve been doing it all year. We’re tremendous running the bases and we have a lot of speed, and we take advantage of that. That pretty much did it, and Romy Gonzalez with that big hit just pretty much opened up the floodgates.” 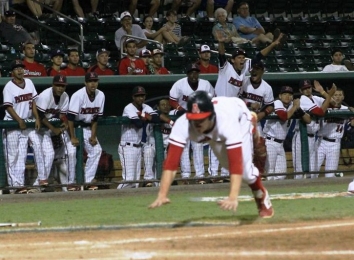 Romy has been a big part of the offensive production all season long, and the team has loads of faith that he will always come through when put in those big moments. Saturday night he proved to them all just why the team feels that way about him, and what has led to his immense success during this historic playoff run.

“I’ve been seeing the ball well lately, ever since we started the playoffs,” Romy said. “Coach Rick, he knows his stuff and I absorb everything that he talks about. He just told me to swing at anything straight in my zone, fastballs basically. In high school baseball it’s tough to land three curveballs in a row, so when you see a fastball that you like you just square it up.”

The Patriots added an insurance run an inning later, as Edison Cabrera walked and stole two bases to get within ninety feet of home plate. Romy again came through with a clutch swing, driving an RBI single up the middle to push the lead to 5-0 with only six outs to go.

“He’s a special kid, a junior who has already committed to UM, and the sky’s the limit for him,” Gutierrez said of Romy. “He’s a tremendous kid and I’ve known him since he was nine years old, and I’m just happy to be coaching him and having him around. He’s one of the best kids I’ve ever coached. One day you’ll be seeing him on TV.”

The Eagles made their final push in the sixth, scoring a pair of runs to cut into the big deficit. Christian James led off with a walk, moved to second on a sacrifice bunt from Andrew Prozzillo and then scored on an RBI single off the bat of Ian Lisle. It was Lisle’s third hit of the day, accounting for nearly all of East Lake’s offensive production. Depperman also scored during the frame, coming in on a wild pitch after reaching base by being hit by a pitch.

With the contest that much closer and only four outs to go, Gutierrez turned to their closer Figueroa. The dangerous right-hander needed just one pitch to get out of the sixth, inducing a foul popout to Norman on the right sideline. Figueroa ran into some trouble in the seventh when Sawyer Wirth walked and Cameron Churchill singled to bring the tying run to the plate. Even with the pressure on, Figueroa knew his teammates and coaches believed in him and trusted he would close the door on things the same way he has all season long.

Figueroa got a big strikeout on a called third strike on a full count to the batter, then induced an infield popup to the right side. Norman and Eric Gonzalez both converged on the ball, both calling the other off as they went for the last big out of the game. Eric squeezed the ball into his glove and just like that, history had finally arrived for the Patriots.

“I saw it go up and I was like ‘yes, I got that pop up that I wanted’,” Figueroa said. “Then they were arguing over who wanted it; they were being greedy because obviously they wanted that last ball. I saw that ball go into that glove and that was the best feeling I ever had in baseball.”

The road to this final pinnacle moment had its fair share of tough challenges and worthy competition. American did not shy away from preparing by facing the toughest teams it could schedule, starting with two difficult opponents in the HSBN Preseason Challenge and going all the way through a regular season that included four big games in the Hoffball Hall of Fame Classic Spring Break Tournament. In the playoffs the Patriots had to get past South Broward, St. Thomas Aquinas and Dwyer, after downing an upstart Reagan squad for the district title. 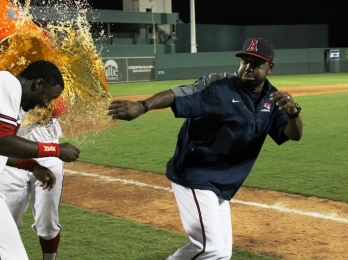 Patriots Manager Ricky Gutierrez tries to avoid the Gatorade shower from his players.

Every player contributed to this accomplishment in their own special way. But one such story that is truly touching comes from senior Kevin Williams. As a sophomore playing for American Heritage-Plantation and being part of that team’s most recent state title squad in 2012, Kevin was 0-for-42 on the season to earn the nickname “The No-Hit Wonder”. Even while being a part of a championship team, Kevin admitted it was a low point in his career.

“It was like a setback for me, and I transferred to American and Coach Ricky took me under his wing and these are amazing guys here,” Kevin said. “We went to states last year and we got sent back home by Tyler Danish and Durant, and then we came up here this year and we were hungry. It’s my senior year and Coach says I was the MVP. I couldn’t have done it without all of these amazing guys around me, and Coach is the best. We are lucky that we won this year, coming together as a family.”

Long removed from a nickname he would just as soon forget, Kevin is a champion once again after being a big part of the offensive formula that led American this far. Kevin delivered clutch hits throughout the season, including a big showing in the team’s state semifinal victory that earned them the right to play for their state crown.

It was a big day for American High, for the Hialeah community that supports it, and also for the entire Miami-Dade County. Earlier in the day South Dade also earned its first state title in team history, beating Bloomingdale 3-1 to capture the Class 8A state title.

“There is no better feeling then this; this is the best,” Romy said. “I don’t even know what to say. This is just unbelievable. This is huge for Miami baseball. South Florida baseball is very tough and it’s awesome to have two teams from down here to bring home a state title.”

Even while celebrating the accomplishment of his team and his program, Coach Gutierrez could not help but feel honored to be a part of a magical day for Miami-Dade high school baseball. South Dade Manager Fred Burnside won his first high school state title, and Gutierrez is the only person who truly knows what that feels like after accomplishing the same feat himself mere hours later.

“That was awesome. South Dade and Coach Burnside, I hugged him out there when we were walking in and he deserves it,” Gutierrez said. “He’s an outstanding coach; what he does with those kids and they compete and are good every year. He deserves that and I’m just happy to win on the same day that he won one. We’re both coming home with a state championship.”