Key West Falls Just Short Against North Broward In 4A 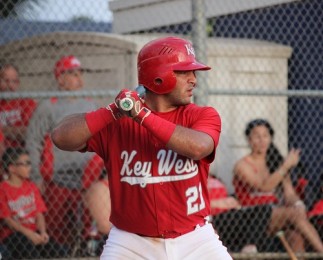 Chris Varela hit a solo shot to put the Conchs ahead, 4-3, in the fourth inning.

One way or another, the North Broward Prep Eagles knew that Friday night’s regional final against the Key West Conchs would be the last in their ballpark.

If they won, they would play the remainder of their games this year in Fort Myers at jetBlue Park where the state championships are held. If they lost, they would settle in for the long off season as their ballpark, a hitter-friendly yard nestled neatly into their Coconut Creek campus, is torn down and a new one constructed in its place.

Apparently, they did not want to wait until after the game to say their goodbyes, as they left it three times during it, including a thrilling, walk-off blast to lead off the bottom of the final inning that secured a 5-4 victory.

Mack Nathanson started the bottom half of the seventh by taking reliever Steven Wells deep for the third time to win the game. Wells served him a 1-2 fastball, and the Eagles’s catcher lifted it over the right-field fence, allowing him to triumphantly round the bases before being mobbed at the plate by his teammates.

“I listened to my coaches,” Nathanson said. “I stayed on top of the ball, got the pitch I wanted and drove it. It hasn’t sunk in yet. It’s awesome. I don’t know what to say.”

Eagles Manager Brian Campbell was so overwhelmed about the win he could hardly contain his excitement.

“I’m so proud and full of so much joy for my boys that my heart’s about to beat out of my chest,” Campbell said. “I’m just so happy for them and so proud of them. I love them. And they never cease to amaze me. They grind it out, and they’re just tough, hard-nosed guys and I love them.”

Campbell’s enthusiasm and pride are well deserved. The win not only propelled his team back to the state tournament for the first time since 2011, it also came against what many considered to be the best team in Miami-Dade County.

At 24-3-1, Key West showed nary a chink in its armor throughout the regular season. As a team, it batted a mind-boggling .348 while its pitching staff posted a collective 1.72 ERA. Despite their remote location and long road trips, the Conchs went undefeated away from their home field. All of these things combined seemed to have them destined to contend for their 12th state title, the most in Florida history.

But, as they say, that’s why they play the game.

The game proved to be a fitting farewell to even the most celebrated of ballparks, let alone an unheralded high school venue. A see-saw affair throughout, it had everyone in the record-setting crowd enthralled, whether they were a part of the frenzied sea of red that lined the visitors side or one of the many boisterous Broward loyalists that lined the other.

Eagles starter Alex Ernestine proved a worthy opponent for the Conchs’ big bats, striking out nine of them in six and one-third innings of work and giving up four runs on just three hits. He looked sharp from the onset and his fastball seemed to have a little extra pop to it as he struck out two of the three batters he faced in the first inning. 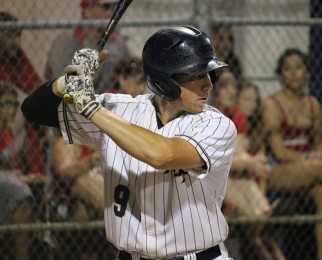 Meanwhile, his teammates gave his mound opponent, Brandon Presley, more than he could handle, chasing him from the game after just one and two-thirds innings pitched.

Like Ernestine, Presley started off solid, tossing a scoreless first inning, but things unraveled for him in the second. He capped off an eight-pitch at-bat to start the inning by hitting Brian Fagan with a pitch. Fagan stole second and was driven in when Kevin Thomas ripped a line drive into the left-center gap for a double. Thomas moved to third on a passed ball during the next at-bat, setting the stage for Max Tannenbaum to bring him home with a sacrifice fly to center field.

“That at bat was no different than any other game,” said Thomas. “The only job is to get the run in, so that’s what I did, drive the ball gap to gap, and it worked.”

After that, Presley issued free passes to the next two batters, prompting his Manager, Ralph Henriquez, to turn to his star reliever, Steven Wells.

In most instances, it would be considered a good thing to chase a starter with a 1.74 ERA after less than two innings. When the guy replacing him had rang up 24 strikeouts and allowed only one run in just over 14 innings of playoff baseball, as Wells had, one might have to reconsider. It took Wells all of two pitches to induce a fly out to right field to get the Conchs out of the inning with just a 2-0 deficit.

Ernestine ran into some control problems of his own at the start of the next half inning and loaded the bases without allowing a hit. First he walked Anthony Henriquez, then he hit Jay Feathers, who was attempting a sacrifice bunt, on the hand with a pitch. That turned the order around for Wells, who reached on an error to bring on Andy Perez. Perez sent a high fly ball into the right field corner to bring two runs across and tie the game. Wells later gave them a lead when he scored on Hugo Valdes’ ground out to second base.

The lead would not last long, however.

Wells looked to be all that was advertised after striking out Anthony Masiello with three blazing heaters to start the fourth. He continued right on firing the fastball through the next four pitches to Hernando Sierra, working the count to 2-2. On the fifth pitch, he threw off-speed for the first time and paid the price as Sierra sent it sailing over the right field fence for the first home run of the night, knotting things up at three.

“I just reacted to it,” said Sierra. “Thanks to coach Doug Jennings. He was giving me the approach, he told me everything that was going to come, and I reacted to it.” 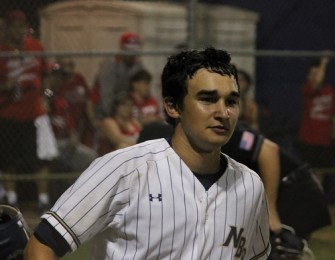 Not to be outdone, Key West went deep in its next at-bat. After falling behind 0-2 to kick off the inning, Chris Varela fought one off then watched three straight balls to run the count full. He fouled off the seventh pitch, then teed off on the eighth, sending it over the center-field fence to put the Conchs back on top, 4-3.

From there, Wells took over. He shut the Eagles down through the fourth and fifth innings and had them down to their final four outs before getting burned on another off-speed pitch. Tannenbaum turned hard on it and rocketed it over the left-center fence to bring things even again.

The Eagles found themselves in a precarious situation in the top of the seventh after Ernestine walked a batter and hit another with a pitch with one out. Campbell called on Masiello, also known as “Moose,” to spell his starter and bail them out of it.

All Moose did was punch out Valdes, a .407 hitter in the regular season, on four pitches and then Presley on three.

“I knew that I gave my all and I just emptied the tank, is what my coach said,” Ernestine said. “After the walk and hit batter, I knew that was it. I had faith in Moose to just close the door, and he manned up and struck out two batters.”

At worst, Masiello had extended the game for North Broward. Instead it was the best case scenario, as Nathanson’s homer made Masiello and the Eagles the victors.

While it was not the result he was looking for, Key West’s manager could not deny that it was a great game.

“It was a good game,” said Ralph Henriquez. “It was a great game and you have to give these kids a lot of credit for battling the way they did. Their pitching was really good. Their left-hander, the first guy, stuck in their but that lefty they brought in did a good job there when we had the potential run that we were looking for there in the top of the seventh. He did a good job of striking out Valdez. Then he struck out our fifth hitter.”

He also did not want for the loss to detract from what his team accomplished all season long.

“They’ve had a heck of a season,” said Henriquez. “26-3 coming into today and playing the way they played all year. They’ve been awesome.”

North Broward Prep has the weekend to enjoy the victory before it has to get back to business. The state tournament begins Wednesday, and Broward’s junior shortstop could not be more excited.

“It’s great. We just won a regional championship,” said Thomas. “We’re going to states, nothing better. It’s been a high school dream since I was a freshman to do this.”

Their starting pitcher also chimed in on the upcoming challenges.

“I just know that we have two more games, and we’re going to come out like we did tonight,” said Ernestine. “Fast and try to score runs, and we’re gonna bring that brass ring back.”