Written by Anthony Uttariello on May 2nd, 2014 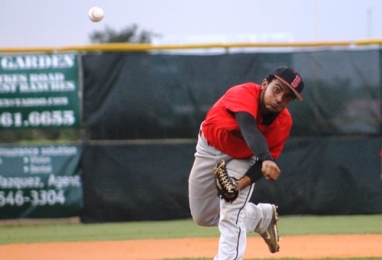 Jonathan Gonzalez left it all on the field for the Hi-Tides on Thursday.

The Flanagan Falcons did not have much competition in their district tournament last week. The Falcons cruised through McArthur and Everglades by a combined 23-1 score. At the time, Manager Ray Evans commented how he did not believe the lack of competition would hurt his squad in the regional playoffs.

Enter Miami Beach. The Hi-Tides finished the season 8-12, and upset top-seeded Hialeah Gardens last week in their district playoffs. By most accounts, this game was expected to be another warm-up for Flanagan on their way to the regional semifinals. As the statement, goes, however, that’s why they play the games.

Miami Beach gave Flanagan all it could handle for eight-and-a-half innings, before the Falcons finally broke through with a run in the bottom of the ninth to defeat the Hi-Tides 2-1. Depending on which coach you talked to after the game, the perspective on this one was very different.

“The effort these guys gave today was unbelievable,’ said Miami Beach Manager Willy Baez. “They left everything out there on that field, and as a coach, that is all you can ask of your players. Nobody gave us a chance against the number two ranked team in the country, and we battled them all night.”

For Falcons Manager Ray Evans, the game was a matter of his team not being prepared.

“That was atrocious,” said Falcons Manager Ray Evans. “We won, and we get to move on, but outside of Gentry Fortuno’s performance, that’s about all I can say positive about this one. We laid down tonight, and that team gave us all we could handle.”

That battle began with Hi-Tides starter Jonathan Gonzalez. The senior came into the game at 0-5, but matched his counterpart, Fortuno, pitch for pitch most of the night. While Fortuno was dominant, striking out 14 in the complete-game performance, Gonzalez had to continually reach down for something extra in working out of jam after jam throughout the game. When the Hi-Tides needed a big pitch, Gonzalez provided it. 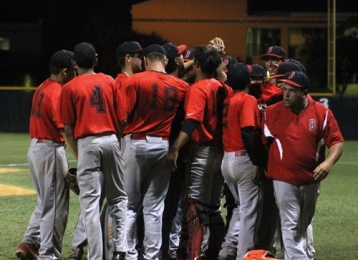 Miami Beach rallied around one another all night long.

“He had no wins on the year, but he has pitched his heart out for us all season long,” said Baez of Gonzalez. “He came in here against a guy in Gentry that has never lost a high school game. Despite those odds, Jonathan rose to the challenge. I couldn’t be more proud of not only him, but the entire team. You can’t help but think if one more thing would have went our way, maybe we would have pulled this one off.”

That one more thing never occurred because of the dominance of Fortuno. As he has done time and time again for the Falcons, the team ace came up big, allowing only one run in his nine innings of work. Like Evans, Fortuno knew that this game was too close to call.

“I don’t know what happened with our offense today, they just didn’t show up,” said Fortuno. “This was an unacceptable performance for us if we want to get where we want to go. This is a huge wake up call.”

Flanagan actually took the lead first in the third inning when Oscar Rodriguez, who had reached on a base hit, stole third and scored when the throw went into left field.

In their half of the fourth, the Hi-Tides answered right back. Trent Bryan, who had two hits on the day and made several outstanding plays at second base, started the inning with a single to left. He promptly stole second, and scored on a Leoni Lamanna base hit.

From there, the pitcher’s took over, exchanging zeroes on the scoreboard through the next three innings. In the seventh, Gonzalez quickly got the first two outs, but then walked the next two Falcons hitters. The senior had reached his limit, and despite his stellar performance, Baez called for Blake Brattain out of the bullpen. Before leaving the mound, Gonzalez shared in an embrace with Baez.

“He pitched his heart out,” said Baez. “I wanted to leave him in, but I have to also worry about his future, which is more important than this one game.”

Brattain worked out of the jam, and then threw an inning of shutout ball himself. 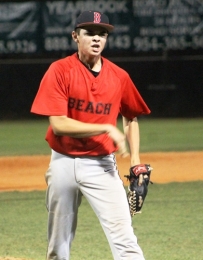 Blake Brattain was strong in relief for the Hi-Tides.

In the bottom of the ninth, Flanagan’s Ryan Dodge began the game-winning rally with a base hit. Pinch-runner Ricky Presno was then thrown out stealing second. After a flyout, Vazquez reached on an infield single. Kevin Mora followed with a single. Luis Barranco then lined a single to left, and when the ball was bobbled in the outfield, Vazquez came around to score the winning run.

“It was an ugly game,” said Evans. “We didn’t do much right except on the mound, and in all reality, we probably should have lost this game. We shouldn’t need wake up calls at this stage of our season, but we got one, and these guys are going to hear about it.”

Flanagan will move on to host Miami Senior, which beat Everglades by an identical 2-1 score, also in extra innings.

“We’ll go back to work tomorrow, and hopefully we will be better prepared when Miami comes in next week,” Evans said.