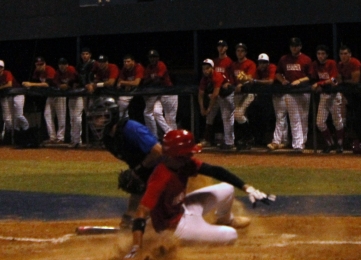 JC Millan scores for the red team in the fourth.

For one more night these young adults were able to play high school baseball.

Friday night at Paul Demie Mainieri Field at St. Thomas University, baseball fans from across Miami-Dade County were able to watch as the top senior players converged for the third annual HSBN Miami-Dade Senior All Star Game. In the greatest year of high school baseball in county history, it was a rewarding occasion that culminated a special season of America’s Favorite Pastime. For the first time in the short history of this event, this year’s contest pitted senior all star players from Miami-Dade’s private schools against the most accomplished senior public school players.

For too long the debate has raged regarding whether red is better then blue. In the first opportunity to decide things on the diamond it was the red squad who came away with a 5-0 shutout victory over the blue team. For now, there is little doubt that red is an impressive color.

With just enough offense and shutdown pitching, the team in red shined bright. The blue squad struggled to get the bats going, but the pitching helped keep it in the game. The coaches in red seemed to have a solid spray chart in place to be in the perfect position to turn some nice swings into outs. The red coaching staff included Manager Jerry Albert of Belen, Florida Christian’s Chris Brigman and LaSalle’s Oscar Benitez.

Joining Killian’s Angel Herrera on the blue squad was American’s Ricky Gutierrez and Miami Springs’ Willie Vazquez. It was a final chance to mix the colors and enjoy a fun game of baseball in front of a large, captivated audience there in support. Playing on a college field with such impressive amenities only helped magnify the moment, especially for Florida Christian’s Jack Diaz and Anthony Lopez, and Miami Brito’s Savian Fernandez, all will play for St. Thomas next season. 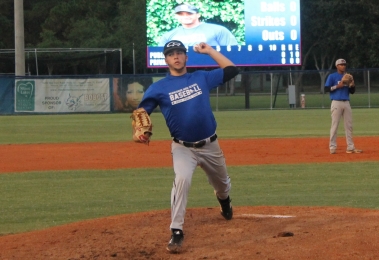 Miami Christian’s Cristian Rivera drove in the first run to spark the only scoring frame. Brito’s JC Millan came home and was able to avoid the tag on the fielder’s choice for the deciding run. Westminster Christian’s Cole Kreuter had a lengthy at bat before lining an RBI single to center to send in Belen Jesuit’s David Guevara, and Miami Country Day’s Adam Seif had an RBI ground out that scored Brito’s Julio Gonzalez.

Rivera came across the plate on an error, and Florida Christian’s Jack Diaz lined an RBI single to center to follow. Diaz brought home Kreuter for the last run of the night, as pitching took center stage from there.

Amaral brought some excitement to his frame on the dish, getting three outs in order in less then usual fashion. TERRA’s Reuben Pino smacked a shot deep to left-center with one out in the seventh and raced around the bases. Pino took his chances to third to try and get a spark, but was thrown out on the play.

Next stepped American’s Ronnie Williams, a familiar foe for Amaral. For years these friends have battled back and forth between hitter and pitcher. Whoever has been on the mound has typically won the match up, as was the case when Amaral was able to strike out Williams to end the inning.

While his friendly rival may have gotten him one last time, so too did Williams get him back for one final swan song. Williams took his turn on the mound in the eighth, and in came Amaral for one last shot at redemption. Instead he went down swinging one last time, exchanging the same final grin that he received from Williams earlier when the roles were reversed. 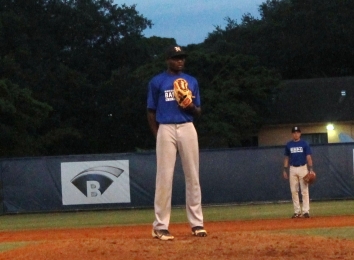 Cleveland Westbrook struck out two in his scoreless inning.

Hits were tough to come by against tough pitching. Also finding some success with the bats were Killian’s Spencer Levine, Varela’s Ben Murray, Tolentino, and Brito’s Julio Gonzalez.

It was an exciting end to a season never to forget. Old friends and rivals enjoyed one last time together before going their separate ways in their careers. This 2014 season was a special one for Miami-Dade, and all of these guys were a part of it.

*Special thanks to Eric Artigues and many others for their generous donations of used baseball equipment to area Chicago White Sox Scout Pepe Ortega. The equipment will be shipped to the Dominican Republic to help underprivileged ballplayers.