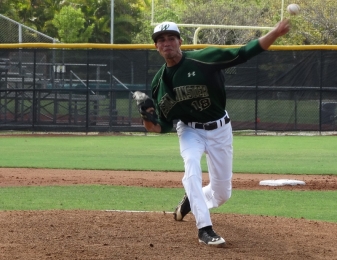 John Gonzales delivers the first pitch of the ballgame.

As he felt the ball impact his bat, Westminster lefty John Gonzalez knew something great had just happened. As always, he ran the hardest he could to reach base. After all, the Dade County runs scored leader makes his living getting to first base to be driven in by his teammates. This time it wasn’t a line drive, a bunt, or an infield-hit, it was a long fly ball to right field.

His teammates have always been witnesses of how much raw power Gonzalez has. According to them, he would rather go the other way than pull the ball. On this occasion, however, the ball was pulled with a violent swing. John ran the bases like the happiest kid in the world. He had just connected his first high school home run.

“It was a long time waiting. I have been talking about it for the last two years. I have had so many opportunities, balls against the net, against the wall. I finally just got my pitch and did it,” Gonzales said of his first high school home run.”

“I am happy for John because he is a go-getter. Anytime a kid can hit a home run, it is something they will remember for the rest of their life. It’s something that will be memorable in his life as he continues on and plays this game.”

Aided by Gonzalez’ hitting, he was a perfect 3-for-3 on the night, and the offense behind him, Westminster Christian(22-4-1) defeated defending state champion Westwood Christian, 17-0.

The game started with a promising pitcher’s duel of Westwood sophomore Nick Mejias against Warriors junior, Gonzalez. The Westminster lefty came out fired up. After hitting the first batter Kenny Goodrich, he retired the side in order.

The Westminster offense, one that had been held quiet the game before by Archbishop Carroll, was ready to showcase its power. They went at the young righty, scoring two runs on a sacrifice fly and a balk. With a runner on, Yuri Sucart came to bat.

The senior belted a two-run-homer to increase the lead.

“It’s all about getting hot at the right time. I am trying to help out the team and produce as well as I can,” Sucart said. “I was just looking for a good pitch to hit, I got up in the count and he gave me a good pitch to drive.” 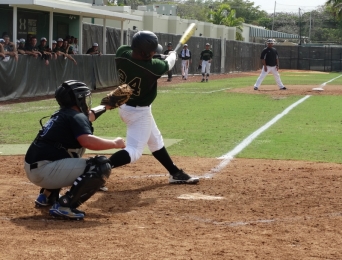 Yuri Sucart smacking a homer to left-center in the first inning.

Castellanos was pleased with his senior’s approach.

“Yuri has always been a great part of our lineup. We are extremely happy for him. He is a big stick in our lineup and he is definitely back, so we are excited to have him in full swing.” said Castellanos.

The offensive explosion didn’t end there. Westminster scored five more runs in the second, two in the third, and six more in the fourth inning to cap the 17 run ballgame.

“When all your guys come out and put runs on the board it is always exciting. We want our guys to just come out there and swing the bats, it doesn’t matter who we play, that is our philosophy,” Castellanos said. “We just have to come out and out-hit, out-hustle, and out-play every opponent we face.”

Westminster pitching was up to par with their offense. After being given a nine run cushion, Gonzalez night was over without allowing a single hit and with five strike outs.  Relieving the lefty, Brendan Auerbacher and Isiah Musa kept the Westwood (13-10) batters on a tight leash. They finished the combined no-hitter allowing only a walk and adding two more strikeouts.

Westwood, a team that by many came into this game as an underdog, saw the end of its season on Wednesday, just a year after winning a state title.

He still was happy for the year that he received from a transition club that only kept two seniors after winning a state championship the year before.

“I feel good for my two seniors. Both of them have college scholarships. They are great kids, they are leaders, humble kids and I know the future is bright for them. We are going to miss both of them next year.” Andrade said. 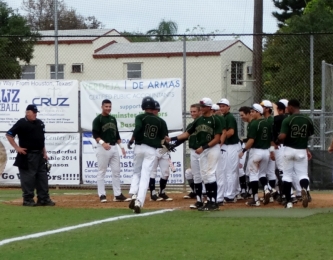 John Gonzales being greeted by his teammates after conecting his first career home run.

One of the seniors Adam Quinones, reminisced his high school career that was ended with a sour note, but gave him many happy memories.

“I don’t feel disappointed by anything. At the end of the day, I know I gave my all and my team gave it all,” said Quinones. “From where we started to where we have come now, I know I am leaving this program in good hands. I am blessed to have been a part of Westwood Christian and I wish Westminster the best luck on the road ahead.”

Westminster will now face 3A-15 winner Sagemont, who beat Archbishop Carroll 1-0. Castellanos said that his team has prepared for this all season long.