Florida Christian Ready To Grind It Out Again In 2015 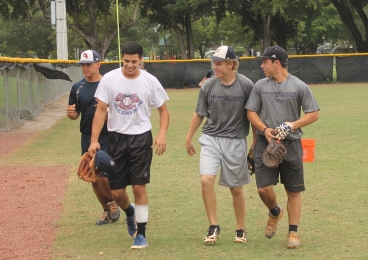 Great chemistry and leadership are the strengths of this Patriots squad this season.

The standard at Florida Christian has been the same for some time. It is a baseball program that has enjoyed its fair share of success, and every year the goal is to add another chapter to that legacy by chasing after another state title. The goal never changes, and fortunately the program has always enjoyed a roster full of guys who understand what is expected of them.

Perhaps nobody knows that better than Patriots Manager Chris Brigman. The skipper is now in his third season at the helm of the team, and has been with the program for over a decade in all. Brigman is a Patriots lifer, a guy who loves his school and his team, and one who embodies the heart and passion for Florida Christian baseball. In his first two seasons in control the Patriots responded to make a run to the state Final Four in 2013 and then follow that up by winning a very tough district last season.

“We have just been blessed with the talent that has come through here over the years, and the staff and their relentless ability to work with these guys and make them better everyday,” Brigman said. “It’s really nothing that I’ve done. It’s been the work of the coaching staff and ultimately it’s the buying in and the effort we get from the players. We feel like we get the most out of them and we’ve been blessed the last two years.”

Each season brings a new identity for each and every team across the county. Yet despite the natural changes, the Patriots have always maintained the same sort of gritty demeanor that makes up their team identity. Year in and year out the roster is full of high-energy guys who push themselves to the maximum on every play. Florida Christian baseball brings its own tough mantra, and every year the new guys seem quick to learn this and buy into that repertoire.

At the core of the current roster is a seasoned veteran who embodies all of these characteristics in junior Ruben Someillan. The speedy center fielder is a three-year starter who was a big part of the team’s success the past few years. As one of the elder guys on the team this year, Someillan now finds himself assuming a larger role as a leader who makes the younger guys understand what the long varsity season is like. 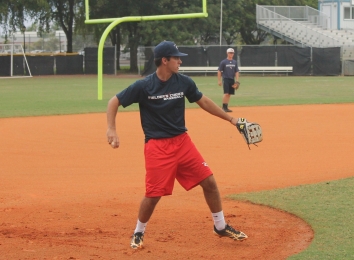 Fall baseball means sharing the fields with football and soccer for the Patriots.

“I just try to let them know that it’s a struggle. It’s not a sprint; it’s a marathon,” Someillan said. “My freshman year we made it to states and that was a lot of games, and the season takes a beating on you. But if you do it together as a team and everybody does what they need to do we’ll always end up competing and getting the ‘W’ at the end of the day. It’s just about competing and being a team, and just staying with the grind and working all year.”

Someillan credits the strong team chemistry to the fact that they are always hanging out with each other. They stick together in the hallways between classes and sit together at lunch. The guys also always hang out on the weekends. This past weekend they got together and played basketball together. Being around each other helps them build their confidence as a team and as teammates to one another. By the end of the year it has grown to be a brotherhood that lasts forever. Someillan admits he still keeps in close contact with many of the seniors who graduated after his freshman year. He appreciates that they are so tight and that is the tradition at Florida Christian.

Within that team building comes the chance for the veterans to make the young guys learn and understand what it takes to be successful. The friendships are forged and it makes the guys that much more willing to listen and learn. The fact that guys like Someillan have been successful in their own careers adds more credibility to the fact that they understand how to get the job done.

“First off, I tell the guys that it is all about confidence. Baseball is all about confidence,” Someillan said. “You fail 70% of the time, so it is just about having confidence when you step up to the plate or when you’re on the mound. It doesn’t matter if you are the best, because you can be the best and do what you’ve got to do or not be the best and still do what you needed to do. It’s about playing as a team and following what your coaches say.”

Although the Patriots said goodbye to some key guys from a season ago, the team is fortunate to return much of its core in guys like Someillan, Brandon Chinea and Jorge Iza. Brigman refers to those guys as his table-setters that get the team going. All three are passionate, excitable players who have motors that never quit. They embody the style of play at Florida Christian.

There are several other guys who are beginning to emerge this season. Adding to this core is junior Robert Fabelo, who will take over behind the plate this season. As a sophomore Fabelo showed the team flashes of what he is capable of accomplishing for them, such as the home run he hit to get the team going in its district semifinal victory. Catching has always been a key spot at Florida Christian and the team is looking for big things from Fabelo this season. Incoming transfers Willie Hernandez and Kendrick Garcia are also doing many things to impress their new coaches. 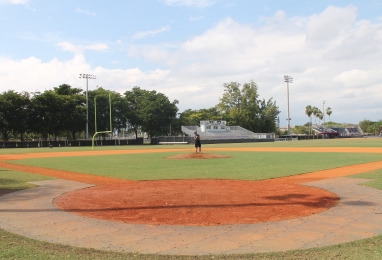 The Patriots will unveil a new look to their diamond this season.

“We’re fortunate enough to be at least two deep at every spot, except shortstop,” Brigman said. “We brought up some guys from JV last year that will fill in the gap and hopefully they will be prepared when their number’s called. If we have struggled anywhere this fall it has been on the mound. But to those guys’ credit they keep coming out everyday working hard and getting better everyday. We’ll be anchored by senior lefty Alex Nodarse and also righty Frank Chacon. We also have some guys who are injured and are rehabbing and working to rejoin the staff.”

Nodarse admits that it has been an interesting fall season trying to work some of the new guys into the mix. That being said, the pitching staff is coming together and they are all working together trying to make each one of them better every time out. They feel as though the offense has had to shoulder more of the burden, and that as soon as the arms come along they will round into the complete team that they know they can become.

“Our team will do anything for our pitching staff,” Nodarse said. “It starts with our offense and we’ll get ahead by a few runs and that’s just because our hitting starts off really good. It makes us confident as a pitcher and lets us relax a little bit. We don’t have to be so tense up there. Just the fact that we’re good as a team helps us a lot and keeps us more calm and comfortable when we’re out there.”

As the veteran hurler on the staff, Nodarse does his part to set the best example. He tries to get the rest of the guys to understand that it is about pulling together as a team, and for the pitchers to just go out with confidence and trust their stuff.

“No matter who we play everybody is the same,” Nodarse said. “Names don’t matter and team names don’t matter either. You just have to go out there and do what you have to do. At the end of the day if something happens you just have to be able to say to yourself that you did your best. You can’t let stuff like that affect you; you’ve got to think that you are the best no matter what and nobody can beat you.”

One thing the Patriots have also done each season is to play the toughest teams they can find. Coach Brigman admits that was the standard long before he came aboard, and that is exactly how he prefers things. They always try to schedule the most quality opponents that they can, especially down the stretch in those last couple of weeks coming off of Spring Break into the end of March and beginning of April when they get into the playoffs. Besides playing in one of the most competitive districts in Miami, the team will also play powerhouses like Miami Springs, Belen Jesuit, Windemere Prep and, as always, rival Westminster Christian. For Spring Break they are going to the High School Invitational up in Sanford, which always brings in some good teams from out of the area.

“Last year things really started coming together coming out of the Spring Break Sarasota Tournament,” Brigman said. “That’s when we started clicking and we were able to get it going down the stretch and get into that first round of regionals. Unfortunately we didn’t get a break, but hopefully we’ll get a chance to get back.”