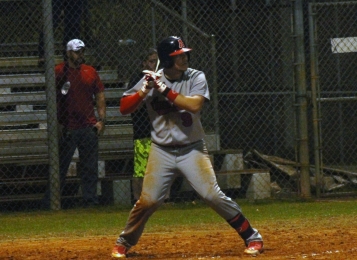 Gianlucca Borelly drove in the winning run and was 3-for-4 with a double, an RBI and run for the Patriots.

American Manager Ricky Gutierrez put it best when he said that these are the type of high school baseball games you want to watch. The Patriots paid a visit to Robbie Smith Field at Southridge High Monday afternoon for a great, non-district showdown with the host Spartans. With a packed house on hand to watch and enjoy, the game was a close and exciting contest through to the finish.

Behind some key hits from Jhony Jhones and Gianlucca Borelly, American prevailed with a 6-3 decision. Jhones tallied the winning run midway through, and then topped it off with a big, two-RBI double to add some late cushion. Borelly was equally effective at the plate, collecting three hits while also driving in Jhones for the deciding run on an RBI double that he blasted deep off the center field fence in the third.

Danger Guevara tossed three scoreless frames to preserve the victory for starter Mike Rodriguez and the Patriots (4-2), while also picking up the save. The right-hander came on in relief of Rodriguez with a one-run lead in the fifth, and, backed by a larger lead in the seventh thanks to Jhones and the rest of the offense, Guevara was able to close things out.

“Basically I just go out there and do what I got to do, and I help my team in every way,” Jhones said. “Everything is for the team. I never think about myself; I just think about helping them in any way. It’s a blessing in letting my pitcher be more relaxing up there with a bigger lead. It makes everybody more relaxed, and that is why we get more hits.”

Although they ended on the wrong side of the scoreboard, the Spartans (3-4) walked away with their heads up high knowing they had battled in the contest. Southridge refused to be intimidated by the defending Class 7A state champions, and jumped ahead 1-0 in the first. Diandre Amion led off the frame by splitting the left-center field gap for a double on a full count pitch. Arlain Sesin followed that win a liner over the second baseman for the RBI single and the early lead.

“Anytime you can battle with a defending state champ with those two arms, it was definitely a bright spot tonight,” Doskow said. “What is great about playing a great program like that from Ricky Gutierrez is you know you are going to face a champ. Those guys are tough, and you can see right off the bat what type of kids you have. Even though it was not a district game, it was intense.”

That intensity is exactly what both sides were looking for in the big match up on Monday. 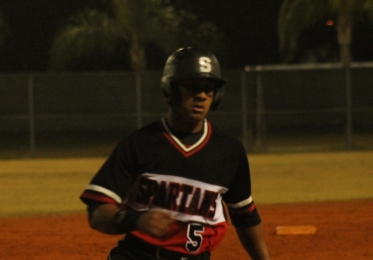 Diandre Amion wnet 2-for-3 with two doubles, two runs and an RBI for the Spartans.

“I always enjoy coming down south and playing these teams down here because they give you that competition that you need throughout the season to keep you sharp,” Gutierrez said. “Coming here on the road to Southridge today we knew it was going to be a tough ball game, and Eddie Doskow does a great job with his team. Both teams came to play, and we got big hits in big, opportune times, and our pitching did OK. Johny Jhones came up big with a two-out double to score two at the end, but it was a good game overall and I am happy with the win. It’s a big win for us to keep moving forward.”

Borelly helped his team answer right back in the second. The designated hitter rolled a single past the shortstop to start the inning, and eventually scored the first of three runs to take a 3-1 lead. Justin Neo and Romy Gonzalez picked up RBI walks to plate Borelly and Victor Cabrera, before John Ham drove home Darian Oliva on an RBI groundout to second.

American got nice production from the bottom of the order, as both Oliva and Neo reached base three times each. After reaching on a pair of walks, Oliva added a flare just over third base and into the left field corner for a leadoff double in the sixth. Neo followed that by dropping a nice bunt down the third base line, then reached on a base hit by hustling down the line to beat the throw across the field. Both runners scored on Johnes’ big double.

“It was big that the bottom of the order came through,” Gutierrez said. “Darian Oliva is a freshman and I gave him the start today at third base, and Justin Neo did a great job today in the nine-hole. They got on base today.”

The Patriots are strong at the top of their batting order, and the club doesn’t expect that many teams will have the success the Spartans did in shutting those hitters down. On days like that, Gutierrez appreciates that so many other guys are proving that they can contribute as well.

“I just feel so blessed to have the opportunity to be playing as a freshman, so I just try to do my best,” Oliva said. “In the eighth spot, since they throw a lot of fastballs, I try to stay aggressive early in the count. I just try to do whatever I can to get on base, and when they make a mistake I want to take advantage of it.”

Also taking advantage of his chances was the Patriots starter Rodriguez, who overcame a shaky beginning to settle in and toss four quality frames. The right-hander scattered four hits and hit two batters, while recording four strikeouts. Rodriguez found his groove in the fourth, as he struck out the side.

“Overall it was a good performance, and we need him,” Gutierrez said. “For us to do what we want to do this year we are going to need Mikey Rodriguez. He scuffled at the beginning of the game and he settled down later on. The fourth inning was his best inning, and he wanted to come and get another inning, but it is too early in the year and I don’t want to load his pitches up. We left it up to Danger to finish it off, and he is another big part of this team. With that one-two punch I think down the road we’ll be fine.”

With so much of the season still ahead, both sides were able to take a lot away from the positive things they were able to accomplish against a worthy opponent. Although a non-district meeting, the game brought with it all the intensity typically saved only for district contests. 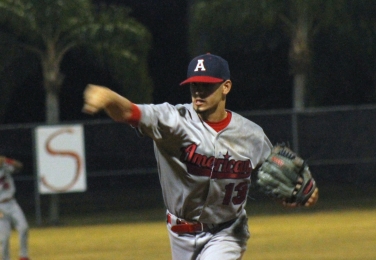 Mike Rodriguez struck out four in four innings to earn the win.

“American is the best team we have played this year, no doubt,” Doskow said. “Those guys are defending state champions and those are two quality arms, and I thought we had some real quality at bats. We have got to build on it; we are 0-2 in the district right now and we have to get better. We have to go with the mindset each day that each kid has to get 1% better everyday. There is a lot of baseball left to be played.”

That same line of thinking fueled the Spartans during the game. The hosts did not falter after falling behind, continuing to battle with good at bats against tough pitching.

Southridge narrowed the deficit in the third to answer back after losing the lead. Austin Peterson was hit by a pitch, and the catcher gave way to courtesy-runner Austin Taylor. The speedy Taylor quickly put his wheels to work to come all the way around and score when Amion smacked the ball deep just fair of the white chalk into the left field corner for an RBI double. Dylan Krzeminski was also hit by a pitch to bring up Sesin, who delivered again by drilling the ball into left-center for another RBI single that cut the Patriots lead to 4-3.

While Southridge has struggled some early on this season, the offense was a bright spot on Monday. The combination of Amion and Sesin accounted for four of the team’s five hits, with the last coming on a pinch-hit single from E.J. Doskow in the seventh.

“We saw who had quality at bats, and those are the guys who we will count on come district time to get the big base hit or make the good play,” Doskow said. “It helps you really fix your lineup. We have had a different lineup every game so far, and I think we know what we are going to do on Thursday when we hopefully give Palmetto a good ball game. They beat us up pretty good last week and hopefully we can repay the favor and beat them this week.”