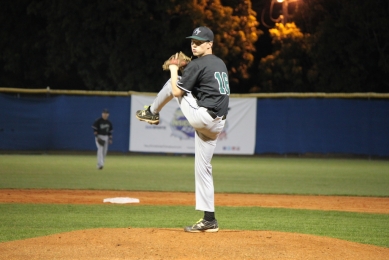 Chris Gomez went the distance with the complete game victory.

Coming into this game the Felix Varela Vipers knew how much of a test this game would be, as they were visiting the District 8A-16 defending state champions, the South Dade Buccaneers.

The Buccaneers and the Vipers were locked in a pitching battle for the first five innings. The Vipers had junior ace Chris Gomez against Bucs’ junior Kendrick Pico, both having good performances leading up to Tuesday’s game. Runs were tough to come by, and it seemed South Dade may hold on after tallying a run in the fourth inning when Artie Paula scored on a pair of errant throws off a Chris Ibanez grounder.

The Vipers took a bit longer to capitalize on an opportunity. It wasn’t until the sixth inning, when Kory Hendon came up big with a two-run, two-out single that scored Chris Allende and Erickson Canoura to put the Vipers on top for good. The Vipers went on to add to their lead in the seventh and then held on for the big, 3-1 victory.

“I’m not going to lie, I was a little nervous,” said Hendon. “I just kept my cool and provided for my team. I was sitting fastball the whole time; I was going to lay off anything off-speed. Once that ball left the infield it was an exciting feeling and I was happy to see the second man score.”

Varela improves to 5-1 overall, but more importantly is its 3-0 mark in the district.

The Vipers added a cushion in the seventh on an infield hit up the middle from Allende. Bucs infielder Willy Escala managed to keep the ball in the infield, but it wasn’t enough to keep Jaymark Garcia from scoring from second base. The Vipers managed to capitalize late in the game after stranding three runners in scoring position before the sixth.

“You like to have it early,” said Barbato. “ But anytime you can get a district win, especially against the 8A state champs, it’s a great win. They showed some resilience and some great at-bats with two strikes. like Kory with the key base hit to put us ahead 2-1. I’m very happy for these guys; they work real hard.”

When asked if something was different during that sixth inning, Barbato was quick to use one word: Patience. 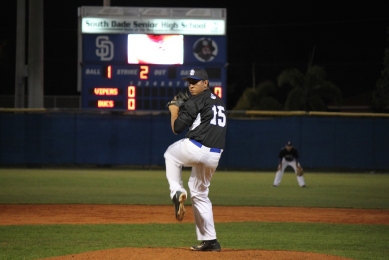 “It was just being patient,” said Barbato of the two-run sixth. “We had baserunners almost every inning and we didn’t get a couple bunts down when we should have, but the next guy stood up and did his job. They were just patient. Eventually we knew we were going to get a break or two, and we did.”

Both pitchers turned in solid games, but it was Chris Gomez with the complete game victory. Gomez allowed just an unearned run in the fourth.

“We just wanted it from the beginning,” said Gomez. “Since the fall we knew we were going to come out here and dominate. We just had to do our job. We tried not to see them as state champs, but just another opponent.”

When his Vipers took the lead, Gomez was determined to finish the game himself.

“Once we went on top this was my game and I’m going to win it,” said Gomez.

Bucs Manager Fred Burnside hopes the loss itself can bring his team back to focus and leave this game behind.

“If this doesn’t bring them back in focus, we’re in real trouble,” said Burnside. “That was a great game. Varela is an excellent club. Gomez pitched a great game; he made the pitches when he had to and we didn’t.”

The Bucs look to brush off the loss with another 8A-16 battle against Miami Sunset later this week, while the Vipers look to extend their winning to six games, also in a 8A-16 game against the Coral Reef Barracudas.