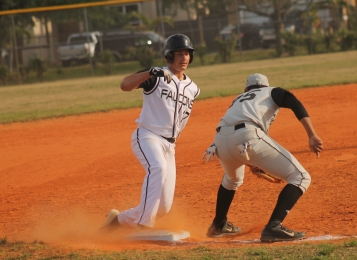 Ferguson’s Brian Perez slides safely into third base after reaching base in the fourth inning.

Thursday’s big victory was exactly what the Ferguson baseball team needed. Behind contributions from guys up and down the roster the host Falcons picked up a much-needed 8-2 victory over visiting Westland Hialeah. Ferguson pounded out 14 hits, made some nice plays on defense and got some solid pitching to put in a complete team performance that helped end a three-game losing streak.

“We’d lost three in a row, and we really needed to make something happen today,” said Ferguson Assistant Coach Daniel Barnard. “I’m really happy with the last day of practice we had yesterday and I am happy with the focus and intensity that we came out with today. All around our pitchers were throwing strikes today, our batters had good approaches at the plate, and we were real aggressive on the base paths. We made a couple of mistakes, but all in all we played a solid ball game against a good club.”

With a big district contest against Coral Gables up next on Friday, the Falcons (3-4) were looking to build some momentum to take into that game. It was the bats that helped to set that tone, as the team put runners on in every inning and kept constant pressure on the Wildcats (3-5). Catcher Alex Soto accounted for the deciding runs when he drilled a shot into the left field corner for a two-RBI double that put Ferguson back on top for good in the third.

Soto was 3-for-3 with two doubles and three RBIs on the day. He also gave his squad an early 1-0 advantage in the first when he plopped an RBI single into shallow right field to score Sergio Ramos, who got on base with a double deep to center field.

“We had a couple of tough games the past few, so we were ready to bounce back,” Soto said. “It feels good and we are ready for Coral Gables tomorrow. It felt good to get the bats back in and it was a good job all around for the team. Coach is always making it important on the two-strike approach, and that double scored two runs when it gave me that two-strike approach. I had two strikes, so it was really important that I stayed back and not try to do too much.”

After falling behind early, Westland answered back in the top of the second inning. Evander Hernandez drew a leadoff walk, Alexei Ortiz slapped a single to center and Rolando Martinez reached on an error to load the bases. Hernandez came home to tie things up on a wild pitch, and Ronel Rodriguez put his club on top with a 4-3 RBI groundout that drove in Ortiz for the 2-1 advantage.

Ferguson answered back in the third on Soto’s big double. Christian Martinez led off the frame with a double deep to center, and Ramos put two guys into scoring position by following with a single to right field that allowed him to advance to second base when the defense threw home to hold the lead runner at third. Vasquez was then hit by a pitch to load the bases and bring Soto to the plate for his biggest moment of the day. 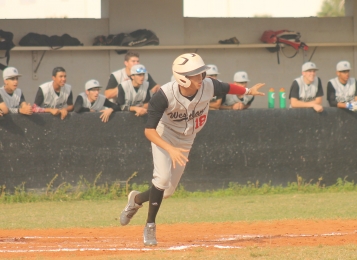 Westland Hialeah’s Rolando Rodriguez singles in the first inning. The left fielder reached base three times and also threw out a pair of baserunners during the game.

“It was nice to win; we were in a bit of a skid but we came out focused today,” said Daniel Esquivel, who was 2-for-2 and also reached on a walk. “The big challenge is tomorrow. This win was good, but it means nothing. Tomorrow is a district opponent and tomorrow we have to come out and play the same or even better to come out with the ‘W’. We need to stay focused and don’t let it get to our heads, and we have to continue our approach. Today we all swung the bats well and we need to continue to keep hitting and keep our approach.”

Although the defense struggled at times, the Wildcats also got some nice plays that helped keep them in the ball game. David Vazquez fielded an infield grounder, stepped on second and then fired to the first baseman Ortiz for a double play in the second. The left fielder Rolando Rodriguez came up with two huge throws to limit the damage in the third, first gunning down a runner trying to go from first to third on Soto’s big double and then following that by throwing out a runner at the plate off a single to left from Duran.

Circumstances beyond their control seemed to also be working against the Wildcats throughout the contest. Several times balls were hit just out of reach of the defense, including two consecutive bunt singles from Alex Medina and Brian Perez that died on the infield grass to leave the fielders with no chance of a play. The second bunt brought home Esquivel and Medina on a throwing error that broke the game open.

Ferguson also executed a suicide-squeeze play from Ricky Duran that scored Alex Vasquez, who led off the fifth with a hard liner past the third baseman. A well-executed double-steal then brought courtesy runner Rafael Gomez home.

The biggest such example of the tough breaks against Westland came in the fifth, when reliever Jorge Perez was drilled in the shoulder on a hard liner right back at him off the bat of Medina. This forced Westland to immediately make another pitching change to bring in Kevin Madera, and Madera lifted up his teammate by getting a pair of fly balls that ended that inning. 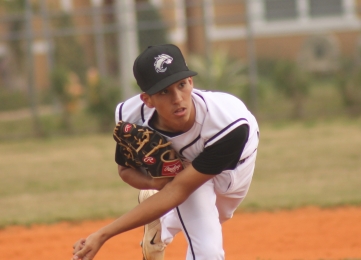 Ferguson starter Brian Menendez earned the win behind five strong innings in which he allowed one earned run while recording four strikeouts.

The Wildcats had seven hits of their own, but struggled to string many of them together. After Bryan Lavastida reached base in the fifth on a hard shot down the line that ricocheted off third base to leave the defense with no chance of a play, he was immediately erased on a 4-6-3 double play. This proved costly when Hernandez followed with a double on a shot off the left field fence.

The freshman Gomez got a big moment of his own with a pinch-hit double in the seventh, crushing the ball to the top of the left field fence before it fell back into play to narrowly miss leaving the yard for a solo home run. Gomez tallied the final run of the day on a throwing error later in the inning.

Westland made one final comeback attempt with its final swings in the seventh. Lavastida doubled on a high chopper over third base, and Hernandez lined a single to right field for runners on the corners. Ferguson reliever Jair Perez finished off his two scoreless relief innings by picking up his second strikeout to end the contest.

It was the third time this season that Ferguson defeated Westland, after the two teams met twice during their season-opening tournament play.