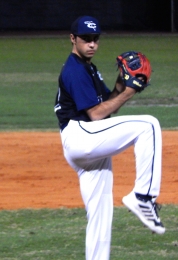 The Patriots handed St. Brendan its first district loss of the season with an 11-1 victory Friday night at Patriots Field. Kendrick Garcia’s two-run, opposite-field home run in the bottom of the fifth inning closed out the lopsided result for the hosts.

“Before the game, we knew they were 3-0 in the district, and we had to give them their first district loss. We need to make ourselves known in district games, ” Florida Christian starting pitcher Frank Chacon said.

Chacon earned the victory by pitching five innings and allowing just one run. He was helped largely due to a high-octane offense that scored eight runs in the first two innings.

Junior infielder Jorge Iza got the fireworks started early by crushing a pitch over the right fielder’s reach for a two-run home run in the first inning. His offensively-charged night did not end there, as he finished 3-for-3 with three RBIs, two runs scored, and he was a triple away from hitting for the cycle. He noted the team’s offensive development from last season.

“This year, we have a better hitting team,” Iza said. “Honestly as a hitter, you can’t think, and today that was it for me. I was in the zone, saw the ball well, and swung.”

The large lead made it possible for Chacon to have control of the game. In the second and third innings it seemed like the Sabres (3-2, 3-1) might have a chance to put some runs on the board and get back in the game, but Marrero pitched through some tough jams by getting key outs with runners in scoring position. 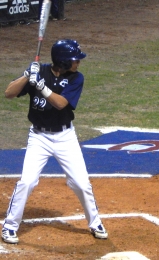 “I had to fix my curveball a couple of times, but my changeup was really good,” Chacon said.

Sabres catcher Benito Varela drove in his team’s only run with a sacrifice fly to deep center field.

After jumping to an 8-0 lead, the Patriots offense was shut down for two consecutive innings before the three-run fifth. Junior shortstop Brandon Chinea drove in a run with a single up the middle to make the score 9-1. That run meant the Patriots were two runs away from ending the contest due to the 10-run mercy rule.  However, Garcia was not thinking about ending the game before coming up to bat.

“I wasn’t trying to look for a home run at all; I just trying to drive something,” Garcia said.

His opposite-field blast led to the Patriots bench erupting in high-fives and chest bumps as they won their first district game of the season in resounding fashion.

“The kids came out to play today,” Patriots Assistant Coach Abel Alonso said. “We made adjustments at the plate, and they came out swinging today. There are a lot of games to be played, and we have a lot of respect for St. Brendan.”

The Sabres’ next game is home against SLAM Academy on February 23rd, while the Patriots continue district play versus the LaSalle Royal Lions on February 24th at 7:00 pm at Barry University.