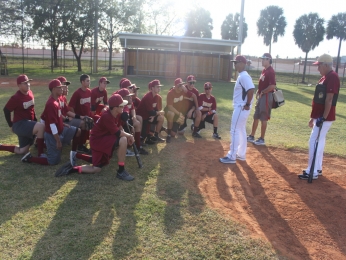 Manager Jose Lopez talks with his players after batting practice.

A loss against the Mater Academy Lions during the regional quarterfinals ended the Goleman Gators season prematurely last year. This year, Manager Jose Lopez and his Gators look to take the next step and put the pieces together for another strong season and a better post-season run. This time around Lopez knows what the missing piece to the puzzle is.

“It comes from the mound,” said Lopez. “The rubber has a big impact in the game and it’s the reason we have fallen short the last two years. My ace went down last year when we were 7-0. If our pitchers are able to come through this year we will be able to make an impact.”

Righty Michael Pelaez is heading into this season as the ace of a staff looking to make that impact. Lefties Thomas Hernandez and Jeremi Garcia look to follow up to what Lopez expects, which is for these guys to be able to throw five competitive innings each time out.

The leader of the Gators infield is senior shortstop Erick Delgado who looks to be the heart of a mildly experienced infield. Aside from pitching, Hernandez looks to spend most of his time at first base after playing outfield for his first two years on the team. Michael Avandano, who was a pitcher for Mater Lakes, is set to be switching between second and third base.

Kevin Perez is primed to be one of the more vital components of this Gators team with five seniors, eight juniors and three sophomores. In the words of Lopez, Perez is a “big frame guy with power,” he looks to spend his time between catching, third base and pitching.

In the outfield Lopez is relying on seniors Justin Berreneche and Kevin Gomez and the newly transferred junior Jeremi Garcia.

Lopez was confident to say, “ I believe we have one of the top three outfields in Dade County.” 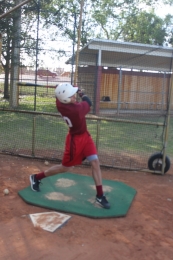 Kevin Gomez looks to have breakout season after only playing half of last season.

“We really didn’t get to see him enough,” said Lopez on Garcia. “He transferred late so he only got to play our four games before the start of the season. He had great at-bats and we feel comfortable with him.”

One of their newly transferred students, Avandano, is set to play a different role than what he is used to. Avandano transferred to Goleman as a pitcher from Mater Lakes and won a spot in the infield for the Gators after a strong fall and preseason with the bat.

Even with the new faces, it is a team of veterans with no freshmen on the team. This year, Lopez says hitting is a part of their game that has improved compared to last year.

“I think we have more hitting than last year,” Lopez said. “I think we’ve improved greatly in that aspect of the game.”

Lopez also acknowledges the arrival of some transfer students has improved the teams hitting.

Health is a key factor in any team and it proved to be critical to a rough second half for the Gators after their ace went down with Tommy John surgery halfway though the season. With their ace out, the Gators went 7-11 the rest of the season. Key players Perez and Delgado look to be back in time for the start of the season after going down with minor issues recently.

Lopez is also confident in his underclassmen and their abilities to step up and perform at a high level. Lopez is also looking forward to see what those new players have to offer after this week of preseason games are over and everything counts.

“They feed off the upperclassmen’s energy,” said Lopez on the underclassmen. “We feel comfortable with the underclassmen we have because they have been here so we know how they react en certain situations.

When asked about a key game during the season, Lopez was quick to answer in a heartbeat. “We’re looking straight at Miami Springs right now,” said Lopez without hesitation. “I’m just concentrated in our district right now, we lost the district championship against Miami Springs at their place and it’s something that is still living with us at the moment. We are still looking for answers and ways we could’ve won that game, but at the end of the day it’s just a game where one day you make a mistake and the other team does their job. I’m not over-looking anyone but we have our eyes on Miami Springs, we want that game back.”

The Gators look to have a great start as they did last year when they started off their season with a seven-game wining streak. The Gators kickoff their regular season play against the Varela Vipers in the PAL tournament and their first district match-up is that game they covet so much, against the Miami Springs Golden Hawks.