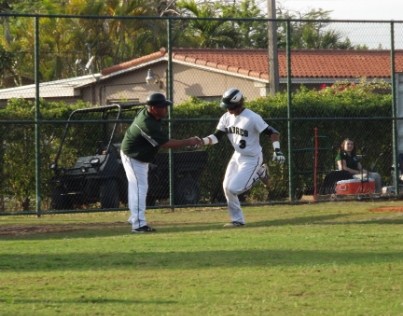 Benito Varela rounds third base after he homered in the fourth inning.

Friday afternoon’s Miami-Dade High School Baseball Network Game of the Week brought an incredibly exciting 4A-15 showdown between the Monsignor Pace Spartans and the St. Brendan Sabres. In front of a big crowd of baseball fans, the contest lived up to the hype with a thrilling 4-3 victory in favor of the host Sabres. The win moves the Sabres into second place in the district with a 4-1 mark, with the Spartans right in chase with a 3-1 district record.

In a ceremonial first pitch celebration to get the event started, Monsignor Pace sent out a first team All-County outfielder for Pace in 2010 and the son of former White Sox and Marlins Manager Ozzie Guillen, Ozney Guillen. Throwing out the ceremonial first pitch for St. Brendan was current Sabres pitcher, Cristobal Arenas.

“Our guys we’re excited for today and it showed, both teams are good baseball teams and you have to give credit to the players,” said Sabres Manager Luis Padron.

The story of the game for the Sabres (5-2) was excellent pitching and timely hitting by way of the long ball. Starting pitcher Hugo Castilla was dominant in his six-and-a-third innings of work, as the senior pitcher allowed eight hits, two earned runs, five walks and struck out ten.

On the other side of the diamond, Spartans pitcher Lorenzo Hamkpton was equally impressive in his outing. Fernandez allowed eight hits, four earned runs and struck out six in six innings pitched. Fernandez did not receive the same timely hitting as Castilla, which resulted in a loss for the fiery hurler.

The first run for the Sabres came in the bottom of the third inning off the bat of nine-hole hitter, Gabe San-Roman. The second run came the very next inning from senior Benito Varela on an oppo-taco, moon shot that may or may not have landed on Coral Way.

“I just tried to hit the pitch that was thrown and get on base so our team can get something started,” said Varela on his fourth-inning home run. 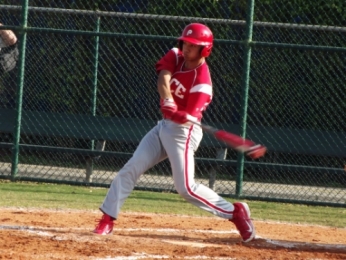 A Monsignor Pace hitter swings at a pitch against St. Brendan on Friday afternoon.

Varela finished the game 2-for-3.

After Castilla recorded two quick outs in the Pace half of the sixth, sophomore Anthony Boix singled to keep the inning alive. Then Nicholas Fusco advanced Boix to second on a single of his own, placing men on first and second and a chance for pinch-hitter Leo Garcia to tie the game. But Castilla struck him out to end the threat.

The Sabres half of the sixth provided some excitement between the two teams at the end of a hard-fought, intense, and well-played ball game. Junior Christian Martin singled with one out to get a Sabres runner on base. After stealing second, Martin stole third. A throw that went into left field saw Martin plate the third run of the game for the Sabres. An RBI single from Nico Lares scored Xander Vasquez, who was in to run for the testy Max Guzman, for the fourth and final run for the Sabres.

One more opportunity for the Spartans (5-3) to start a rally and tie the game came in the top of the seventh inning. Jorge Arenas led off with a single, but was followed by a strikeout and fly out from the next two batters. With two outs and down by three runs, senior infielder Eddie Cutillas smacked a two-run home run to cut the deficit to one and keep the Spartans’ hopes alive.

Andres Sanchez worked a walk and Manuel Rodriguez singled, putting the tying run into scoring position. But lefty Emilio Valdez had other ideas as he got the last batter to hit a ground ball to the second baseman for the final out of the ball game.