Miami Central Kicks Off 2015 With A Victory 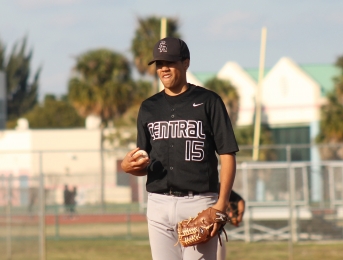 It was a win that was a long time coming. The Miami Central baseball team had not won a game in a couple of years, and on Tuesday that streak ended with a resounding 17-2 victory over Carol City. For the first time since April 2013, Central celebrated a victory at the conclusion of play.

Under unusual circumstances the Rockets (1-0) hosted the game but played as the visitors, after the game had to be moved under short notice. The Chiefs (0-1) have a new on-campus field, but the game was not yet available for Tuesday’s contest. Central will host Carol City again later in the season.

Neither team cared where the game happened, they just wanted to get out and play baseball. For the victors, it presented a chance to move past the struggles of previous seasons and also give new Rockets Manager Tom Mannix a win in his coaching debut.

“Coming from last season, it was a struggle of a season,” junior Dwayne Barber said. “We all are coming together with a new team, new players and new coaches, and we just come to compete in the district.”

Barber helped to get things going in the top of the first inning, when he smacked a 1-2 offering deep to center field with the bases loaded. The Rockets were patient to start, and Malik Vigille, Jason Duban and Tyler Harris all drew walks to load the bags and bring Barber to the plate.

After he fell behind, the 6’1” junior used his long frame to shorten through the ball and make contact. He caught a live fastball and slugged it deep to center to give his team a lead they would never lose, as Barber raced around the bases and slid into third with the three-RBI triple.

“With the bat, it flexed on me so I just knew it went to the outfield,” Barber said. “I was surprised and I looked at the ball and it had a perfect curve that got past the center fielder, so I read the run. The feeling right there watching my teammates go in with the smiles on their faces for the three RBIs was awesome.”

Barber scored on a wild pitch to account for the deciding run, and Christopher Johnson and Jacob Rivera also scored in the frame. Staked with a 6-0 lead before he even took the mound, Mannix told his starter Harris to focus on his fastball and just throw strikes. Harris was able to throw a lot of strikes and keep it going the entire way.

Harris went the distance to earn the complete-game victory. The right-hander allowed two earned runs on two hits, two walks and a hit batter. Harris had solid command of his fastball, with enough velocity to stay ahead of the hitters and pave the way to an impressive 14 total strikeouts.

Harris also added to his day with a big, two-RBI single in the fourth. The junior smacked a shot deep into the outfield to drive home Rodriguez and Vigille. It was his only hit of the day, but Harris also walked and scored twice. 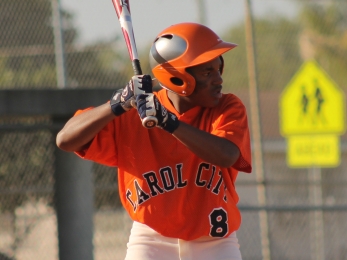 Ayeolebe Randolph had two stolen bases and a run, and also turned an unassisted double play for the Chiefs.

The Rockets provided plenty of other offense to support Harris. Central got two more big scoring outbursts to break things open, including another big triple from the catcher Jacob Rivera. Daniel Rodriguez led all hitters by going 2-for-2 with a run and an RBI single that drove in James Jean-Pierre. Rivera, Barber and Dubon each scored three times, and Marcus Sparks made the most of his only plate appearance by smacking a single to right field.

The Chiefs struggled to get on base, but when they did get guys on they were able to generate some scoring of their own. Ayeobele Randolph led off the bottom of the first with a walk, and after Jamari Lively reached on an error, the pair pulled off a double-steal to bring Randolph home and answer right back. Lively also scored in the inning, coming across the plate after a passed ball.

Randolph added the biggest play on defense, when he snared a line drive and alertly raced to second base to double off a base runner. On a tough day overall, Carol City Manager Randy Rodriguez was glad to see the team execute behind their biggest asset.

“We have a lot of speed,” Rodriguez said. “They identified the mistakes of the other team, and their advantage was their speed to run the bases. They did that and they were able to get a few runs.”

Carol City also got a bit of offense in the fourth. Tyrone Clark led off with an infield bloop single, and two batters later Rhome Darrious beat an infield blooper to first base for the RBI single. Although it was the team’s only two hits,

“We still have a lot of work to do as far as defensive situations and hitting, but they are coming around,” said Rodriguez. “They are starting to see things full circle now that they are seeing the game.”

The entire experience was also new to Mannix, who admitted he didn’t know what to expect in his first coaching experience with Miami baseball after coming from New Jersey. They will grow and learn together, and the focus for the team is to just improve each and every game.

“I know we didn’t have any wins last year, so getting at last one win, I know that is an improvement,” Mannix said. “Our goal is to just compete and play the game the right way. I’ll be proud of the guys win, lose or draw.”