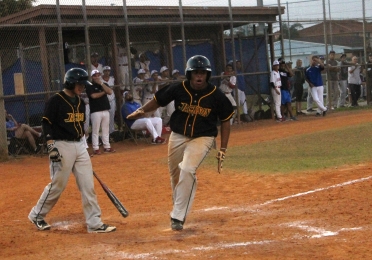 Miami Jackson’s Kerlin Mateo scores the winning run in the top of the seventh inning.

There was no shortage of offense Tuesday afternoon in Hialeah, as the Hialeah Thoroughbreds hosted the Miami Jackson Generals in a slugfest at Alex Fernandez Field. The teams combined for 28 hits and five lead changes, and the Generals scored three runs in the top of the seventh to pull out the exciting 15-14 victory. The game ended after Jackson closer Yordy Cabrera got a called third strike with the bases loaded.

“I was nervous, but I knew what I had to do and that was to throw strikes and step up for the team,” Cabrera said. “I didn’t know what to feel after I got that strike called. I felt happy and I got the confidence from my teammates, and it felt great to help out my team. The team steps up for me and now I did it for them.”

Trailing by a pair and down to their final swings, the Generals maintained their discipline and continued to work. Ernesto Ortiz and Dariel Santana drew walks, and Kerlin Mateo reached on a fielder’s choice that loaded up the bases. Ortiz came home on a wild pitch that advanced the runners, and Bryan Valle hit the ball to the right side for a 4-3 RBI groundout that plated Santana to even things up. Mateo then tallied the decisive run on a passed ball.

Jackson is off to a nice start to the season, improving to 3-1 a week after it was the runner up in the PAL Tournament in Miami Beach. A huge key to the team’s success comes in the punch provided from its deep trough of hitters. Throughout the contest the Generals were poised, relaxed and confident. Batters came to the plate with an approach and a plan, and most often they were able to accomplish that goal.

“We just want to put the ball in play and we don’t want to strike out too much,” Santana said. “We want to play smart baseball and do the small things and everything right. We have to play as a team. When you see a guy at second base you have to move him to third, and then the next guy is going to hit a ground ball and then we are going to score the run. You have to work as a team and then we will win.”

Both clubs relied on several big innings to put up lots of runs. Trailing 5-0 after two innings, Hialeah struck back for six runs to take the lead. Arnaldo Brito walked and Deivis Rojas stung the first pitch he saw deep to center field to deep Brito all the way around and put the Thoroughbreds on the scoreboard with the RBI double. Branden Perdomo was hit by a pitch, and Alexis Figueroa ripped a shot past third base for an RBI double.

Hialeah was just getting started. Daniel Nieto pushed Perdomo home on a sacrifice flyout, and Adrian Gomez lined an RBI single through the left side to score Figueroa. Stephen Garcia tied things up when he crushed an RBI single to center, and Gabriel Monserrat came in to run for the catcher. Monserrat put Hialeah ahead following an RBI double from John Venegas. 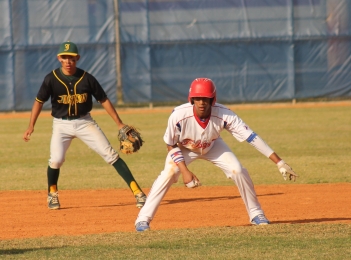 Both sides had plenty of base runners on Tuesday.

“The adrenaline just goes up and down with the swings of momentum,” Generals Manager Rafael Jiron said. “I try to keep an even-keel because I know my guys take after me. If I show I’m nervous they are going to be the same way, so I am always up and on top of them to keep on going and don’t give up. I’m so excited because last year that was our big thing was we would get down and we would just let down and give up. Now they step on the field and they believe they can win every time.”

Jackson answered right back in third, batting around the order to put up seven runs and jump back in front. Valle was hit by a pitch and Gio Ocampo and Cabrera singled to load the bases. Joel Rivero took one for the team to get hit by a pitch, pushing in Valle. Francisco Brenes ran the bases for the catcher Ocampo, and he scored along with Carbera on a two-RBI double up the middle off the bat of Larry Bravo.

Santana reached on a fielder’s choice to keep things going, and Rivero scored on a throwing error on the play. Ricky Guerrero smacked the ball deep to left-center field to score two runs, and two batters later Valle completed the big frame by sending Guerrero home on an RBI single up the middle.

The Thoroughbreds kept chipping away to get back into the contest. Carlos Reyes hit a solo home run to spark a five-run fourth inning, and the senior added an RBI double in the sixth to cap a 3-for-5 day at the plate. Perdomo added a two-RBI single, and Stanley Eusebio added a pair of RBI singles.

“The good thing today is they came out with the bats and they hit a little better, and it is probably our best hitting game we have had this season,” Hialeah Assistant Coach Juan Garcia said. “We committed a few errors, but we were able to come back and respond with our bats. It’s a give and take, because you get excited when the guys score six runs but then their team comes back and scores seven runs. That’s baseball; we’re supposed to do our job and they’re supposed to do their job.”

The loss dropped Hialeah to 0-3-1 under new Manager Ozzie Borrell. With its first district game of the season on the horizon, the club will be looking to build off the positives from Tuesday’s outing and work to swing the pendulum in its favor and get that first win of the season.

“One game at a time, hopefully next time we will make less errors and be able to come out with a win,” Garcia said. “From a coach’s point of view you see the good things and you see the bad things, and at least we hit today. We just need to fix the errors because you aren’t going to win a lot of ball games with a lot of errors.”