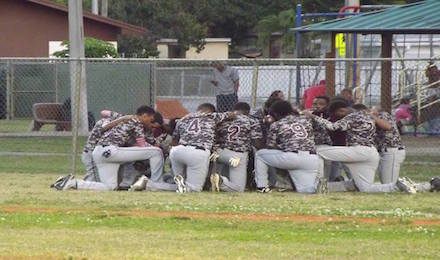 The Norland Vikings visited the host Mourning Sharks Tuesday under the lights at Pepper Park. It was a great District 6A-15 match up that placed two talented pitchers against each other and the game was as entertaining as they come with the host Sharks scoring late to secure a slim 6-5 decision.

The contest was filled with back and fourth scoring and clutch, two-out pitching with runners in scoring position. But it was three bunts in the bottom of the sixth inning that ultimately decided the game.

The Sharks’ offense collected ten hits in total, but what set them apart was execution in critical situations. They struck for the deciding run in the bottom of the sixth, after junior Anthony Antigua smacked a leadoff double, advanced to third on a swinging bunt and then came home on a gutsy suicide-squeeze by Brandon Rios.

On the other side of the diamond, Vikings Manager Dave Dresner admitted that his squad did not play to their utmost ability. But Dresner did take away some positives from the loss.

“You know there were some highlight. We got to second and third with less then two outs, we just couldn’t bring them in,” Dresner said. “Brandon Carter threw well, he battled and he was getting people out. I think he did fine pitching. He was strong, he only threw about 60 pitches, and it’s a shame we couldn’t get the win for him tonight.”

The junior right-hander Brandon Carter got the start and took the Vikings into the fifth inning, before turning the pitching duties over to Tyrone Miller. The fellow junior Miller was able to escape a very dramatic bottom of the sixth inning by striking out the last batter of the inning with the go-ahead runs on second and third base. Miller surrendered one earned run on three hits, while striking out one.

For the Sharks (5-1, 2-0), right-hander Brandon Rios got the starting nod. The hard throwing junior went 3.2 innings giving up five hits, five walks and five runs, while recording four strikeouts. Rios showed a ton of resiliency and leadership by getting into trouble nearly every inning but always finding a way to get out with manageable damage and still leaving his team an opportunity to get the runs back. 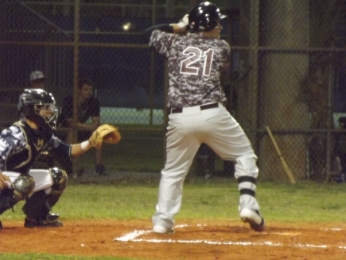 Dylan Belle of Norland gets ready to take a hefty hack at a pitch.

Sophomore Jim Varona took over for Rios with two away in the fourth inning, and he shut the door. The sophomore stepped up and only allowed two runs, one earned, and struck out four Viking hitters while allowing three hits, and a walk.

“I knew with Varona, when the game got tight, he’s my guy.” Bonilla said. “When the bases are loaded, whatever happens with him, I am OK with it. I am proud of that kid. Jim Varona is only a sophomore and there is more to come. He’s one of my guys, he came in and shut it down, I am proud of him.”

Varona was effective Tuesday at attacking the Viking hitters. He would miss high and in and then paint the outside corner for a called strike.

The scoring happened quick for the Vikings offense. In the first inning Vikings leadoff batter Roderick Lucas led the game off with a single and eventually stole second and third, and finally scored on a passed ball. The Vikings (2-1, 0-1) plated another run in the top of the second and third innings, respectively. The Vikings’ offense collected eight hits and stole nine bases that resulted in five runs.

Mourning answered back in the bottom of the fourth. With two outs and trailing by a run, junior Anthony Antigua laced a triple into the right-center field gap. A Max Liff infield single scored him, tying the game at three. After a passed ball advanced Liff to second, Rios knocked him in with an RBI single. Rios then advanced to third base on a throwing error and would later be driven in by senior left fielder Aaron Petrash to make the score 5-3 heading into the top of the fifth.

Not to be outdone, Norland responded with a two-run fifth inning of its own. A Dylan Belle double led things off for the Vikings, followed by an error, a hit batter, a 4-6-3 double play and finally an RBI single by Jahmarr Bien-Aime. Just like that things were knotted at five each heading into the sixth inning, setting up the late dramatics from Antigua and Rios to produce the deciding run.

“I am proud of my guys; they battled and came out on top,” said Bonilla. “Norland is a good team, well coached, and give them credit.”