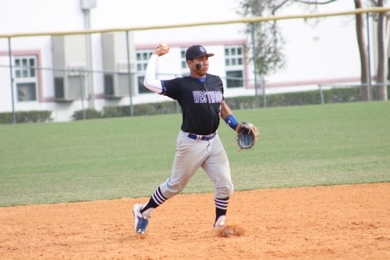 The Sagemont Lions have gone from the hunter to the hunted over the course of the past season. After winning 3A-15 last year, the Lions came into 2015 with a target on their back. The young Lions team has responded by playing some of their best baseball early. On Tuesday afternoon, they defeated district rival Westwood Christian 4-1, moving into a tie for second place in the district in the process.

“We knew Westwood was going to come to play today,” said Lions Manager Wesley Morejon. “Last year we beat them three times, and I told the guys before the game that they were going to come for us after that. We played well today, and scored the runs we needed to to win the game.”

Two of those runs came in the opening frame. After Sagemont starter Niko Leontarakis worked an easy top of the first, the offense gave their starter a lead.

With a two-run lead, Leontarakis went back to work. One of the leaders of the Lions, Leontarakis was making his first start of the season after battling tendinitis early on this spring. The junior looked sharp, completing four innings of no-hit ball, before Morejon went to the bullpen.

“It was his first time out there, and we had him on a strict pitch count,” said Morejon. “After he came off in the third, we asked him how he felt, and he wanted to go one more. With his pitch count down, we sent him back out there, and he did a great job today.”

But, there was the issue of the no-hitter.

“I wasn’t even thinking about the no-hitter while I was pitching. I didn’t realize until after I came out of the game that we had a no-hitter going. To me, it’s not about that stuff. It’s about playing well as a team, and these guys fielded behind me today, and we hit the ball, so I am happy with the outcome.”

Even with Sagemont feeling in control for most of the game, it was only a 2-0 game entering the fifth inning. Westwood scored a run in their half of the inning on a strikeout passed ball. Matt Fernandez, who had singled to lead off the inning, scored on the play.

In their half of the fifth, the Lions offense provided the insurance needed, scoring two runs. Carmona and Michael Machin had the RBI singles to extend the lead to 4-1.

Adam Tulloch worked 1.1 innings in relief of Leontarakis, and Carmona threw the final 1.2 innings to pick up the save. 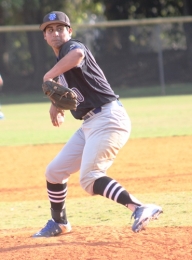 “This was a good team win for us,” said Carmona. “We were able to score early and put some pressure on them, and then those two runs in the fifth were big as well.”

For Westwood, the offensive struggles are something Manager Julio Andrade has seen too much of already this season.

“We have to get the bats going,” said Andrade. “We’ve already lost a couple of tight games in the district, and if we want to turn that around come playoff time, we have to find a way to score some runs.”

The loss may not have been the worst of news for the Warriors on Tuesday. Sean Acevedo, one of the leaders of the Westwood squad, was pulled from the game with a knee injury after getting the final two outs of the fifth in relief of starter Nick Mejias.

“That is going to be a big blow for us, because we are not very deep, and we rely a lot on Sean,” said Andrade. “But we have to have a next-man-up mentality, and the guys are going to have to pick up the slack if Sean is out for any extended period of time.”

Westwood does not have much time to get over the Sagemont loss, as it travels to face district leader Hialeah Educational on Friday.

Sagemont will take its 3-1 district record into a second place showdown with SLAM on Friday in Miami.