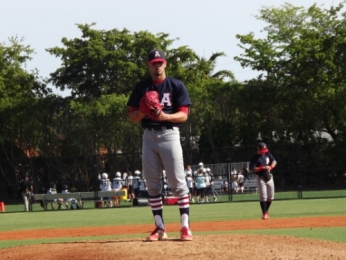 American freshman Mike Montes delivered an RBI single in the top of the eighth inning to lead his Patriots past #1 Gulliver Prep 5-4 on Monday afternoon. The Patriots entered the top of the eighth with the score knotted at four runs apiece, and with their seven, eight and nine batters due up. A leadoff double by junior Robert Menendez set the stage for the freshman Montes.

The eighth inning started when Menendez smoked a double over the center fielders head that landed just shy of the center field wall. A Brian Borges sacrifice bunt advanced Menendez to third base, putting him ninety feet away from scoring the go-ahead run. Justin Neo attempted to bunt his way on but bunted the ball off his leg, which resulted in the second out of the inning. Montes wasted no time, as he swung at the first pitch he saw and drove it past the fully extended third basemen into left field.

American took down the top-ranked team in the latest HSBN Miami-Dade Power Rankings. The Patriots entered Monday’s game as underdogs, but judging off the chatter in the dugout the players simply did not care. The Patriots (10-6-1) came out a blazing early in the game, and remained that way throughout.

“The Raiders are obviously a good ball club, and are coached very well,” said Patriots Manager Ricky Gutierrez. “We got great pitching today, and came out on top this time around.”

Balance was the key to success. The Patriots were led offensively by Robert Menendez’s two hits, which included his double that led to the game-winning run for the Patriots. On the mound the Patriots sent out starting pitcher Michael Rodriguez, who gave his club three and two-third innings in which he allowed four runs, three hits and four walks before being lifted for winning pitcher Danger Guevara.

For the Raiders, Manager Javier Rodriguez sent senior left-handed pitcher Evan Kravetz to the hill. The senior received a no-decision after he threw four innings and gave up two earned runs, while striking out four and walking four. Right-handed reliever Rob Touron, threw the final two and-a-third innings while allowing one run and three hits and striking out three.

After the Patriots offense jumped on Kravetz for two runs in the first inning and the Raiders answered back. American got a run of its own in the bottom half of the first, where things remained until the third inning. 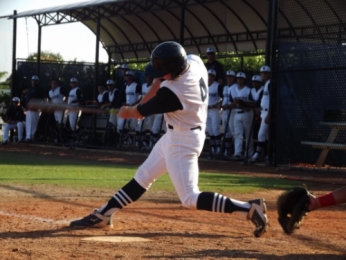 Gulliver’s Justin Fernandez takes a cut at a pitch.

In the top half of the third inning, Montes led the inning off by taking first on a four-pitch walk, and then advanced to second and then to third on balls that scurried away from the catcher. With two outs in the inning, senior John Ham hit a ball in play and reached first safely on an error that also plated Montes.

Rodriguez breezed through the bottom of the third, as did Kravetz in the top of the fourth.

A huge bottom of the fourth saw the Raiders plate three runs and take their first lead of the game. Javy Valdes led the bottom of the fourth off with a walk and, after a loud out to the right fielder and a ground out to the third baseman, found himself standing on second with two outs. It looked as if Rodriguez would pitch around the leadoff walk and escape unscathed. However, back-to-back walks to Pedro Pages and Stephen Alonso reversed those fortunes.

The next batter was the hot-hitting Justin Fernandez. The senior ripped a double down the right field line that made it all the way to the fence, knocking in all three Raiders base runners and making the game 4-3 in their favor.

Taking over for the Raiders (12-5) in the top of the fifth inning was senior right-handed pitcher Palmer Phillips. The righty gave up a leadoff double to shortstop Roman Gonzalez who was eventually driven in on a two-out single, tying the game at four apiece.

The game remained scoreless for the next two and-a-half innings as both pitchers were feeling it. Through the bottom of the fifth and the entire sixth and seventh innings, Palmer and Guevara combined for ten strikeouts, two walks and zero runs allowed.

“Rodriguez and Guevara have been our guys all year,” said Gutierrez. “We believe whenever one of them is throwing we will win that game.”

The Raiders eighth resulted in a relatively easy one, two, three inning, which included two strikeouts and a pop-up to second base. Guevara picked up the victory.