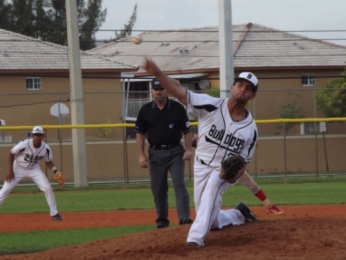 Victor Flietes delivers a pitch against Miami Christian on Friday.

Behind an impressive five-inning start by junior Victor Fleites and a solid offensive showing led by Palm Beach State commit Peter Baldrich, Hialeah Educational Academy downed the Miami Christian Victors 3-1 on Friday night at Slade Park. The Bulldogs picked up another win that improves their record to 10-2 overall.

It took Fleites exactly one inning to dial into the zone that all good pitchers seek. He gave up an unearned run in his first inning of work. But once he settled in, it was smooth sailing until his final batter in the fourth. Fleites didn’t try to overpower many hitters; instead, he painted the corners with his fastball, made hitters miss with his off-speed pitches and trusted his defense behind him.

“Pitching has been the story for us all year, they have been doing a heck of a job, man,” said Bulldogs Manager Reggie Rodriguez. “Pitching coach Anthony Nalepa has done a phenomenal job with our guys. Our staff has an ERA under 2.00, which is a credit to all of them.”

Fleites (2-1) attributed his success on the mound to trusting his teammates.

“I’ve had a rough start and I know I am better then what the stats show,” said Victor Fleites. “I just want my team to win. I will be out there, regardless, and I know my teammates have my back.”

Fleites settled in following a shaky first. After he struck out the first batter of the game, he hit the next batter and then gave up the Victors’ only run on a double by Sebastian Dayoub that allowed Aldo Ripley to score on a defensive error. Of the 15 outs Fleites recorded, he was able to induce six ground ball outs and five fly ball outs, along as getting four guys to strike out in his five innings. The righty’s final line was four strikeouts, three hits, two walks, a hit by pitch and an unearned run allowed.

On the offensive side of the ball, a total team effort was also the theme on the night for the Bulldogs. They plated three runs via just one extra-base hit, as the rest of their four hits were singles. The Bulldogs drove in a run in the fourth thanks to Baldrich. The senior used his speed to beat out a groundball and reach base safely for an infield single in the fourth. He then advanced to second base on a passed ball, moved to third on a fielder’s choice back to the pitcher, and finally scored after the ball kicked away from a defender. 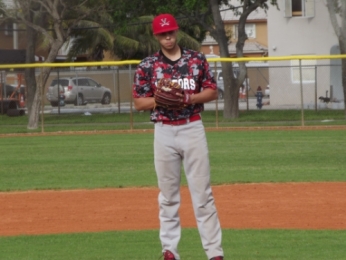 Alexander Martinez before the start of Friday evening’s game against Hialeah Educational Academy.

The sixth inning ended all hope for the Victors (6-5). The Bulldogs faced relief pitcher Jonathan Bermudez, and Danny Ramos led off with a ground ball that went over the head of the first basemen before advancing to second on a throwing error. After Baldrich laid a bunt down that turned into a single, the big dagger came in a two-RBI double off the bat of Kenny Goodrich.

Miami Christian’s Anthony Potestad led the top of the fifth off with a single up the middle. However, Potestad was hosed at second after a botched sacrifice bunt went back to Fleites, who played the ball perfectly and got the lead runner. Fleites then retired the next two Victors in order, and his day was finished.

Miami Christian starter Alexander Martinez was just as impressive as Fleites in his outing. The junior right-hander tossed five innings of two-hit ball in which he only allowed one earned run. Martinez used a heavy fastball and good hook to effectively carve up the Bulldogs lineup. However, an error in the bottom of the sixth allowed two costly runs that decided the outcome.

“Our defense let us down late, and our bats were quiet all game,” said Miami Christian Manager Chris Cuadra. ”It opened up for them to score, and Hialeah is a good team, so they capitalized.”

Bulldogs reliever Anthony Tedesco placed a Victors runner on first with no outs in the seventh, and Nalepa went out for a mound conference that worked. Tedesco retired the next three batters in order and walked off the field the winning pitcher, improving his record to 4-0 on the season.

“We practice hard, we play hard and that is something our coaches instill in us,” said Baldrich, following his 2-for-2 day at the plate with a run scored. “If we stick to what the coaches tell us we will see good things happen for our baseball program, not just this year, but in future years.”