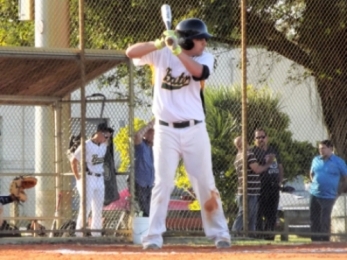 The Brito Panthers continue their championship form from a year ago where they won the 2A state title last spring. The Panthers have not lost a game since April 15, 2014 when they fell to Highlands Christian 6-5 in a non-district game. Brito rolled to another victory Monday afternoon, a 11-1 win over Keys Gate Charter.

The Panthers (8-0) used a very solid pitching performance from starting pitcher Daniel Castillo to pace themselves to a 10-run victory over the Knights (2-5-1). In addition to Castillo’s performance the offensive attack was firing on all cylinders, as the Panther offense collected 10 hits on the day.

Leading the offense for the Panthers was junior Christian Alvarez. The utility man scored three times, collecting a single, a double, a walk and driving in two runners.

“Castilla bounced back from his last start and threw a gem for us today,” said Manager Pedro Guerra. “This gives us good confidence for the rest of the week and going forward.”

Castilla was facing off against Christian Gonzalez of Keys Gate Charter. Castilla made ease of the majority of the opposing team hitters throughout the game and he let his defense work for him. Thirteen of the fifteen outs that Castilla recorded were balls off the bat, and just one was by way of the strikeout.

The first inning saw Brito plate two runners in Christian Alvarez and Marco Bolano to open the scoring and Brito would not look back. Keys Gate Charter started the top of the second off with a single but fizzled out after that on two fielders-choice’s and a line out to second.

Brito again capatilized and scored a run in their half of the second inning. After Gonzalez struck out the leadoff batter, he gave up a single to Robert Hernandez, who in turn stole second base, putting a runner in scoring position with one away. Richard Nunez grounded out to the third baseman on the next pitch and Hernandez advanced to third on the throw. An RBI double would knock Hernandez in and give the Panthers a 3-0 lead after three innings. 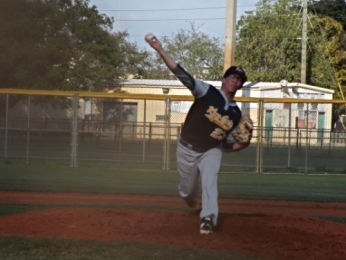 Christian Gonzalez of Keys Gate Charter delivering a pitch against the Bitro.

The fourth inning for both teams was a scoreless one. Four innings is as long as Keys Gate Charter starter Christian Gonzalez lasted, and his final line included four earned runs on six hits and three walks, with three strikeouts.

The Brito half of the fifth resulted in five runs and perhaps the dagger. This came in a big two-out, bases-clearing triple off the bat of Jan Hernandez,. Scoring on the triple was Luis Nieves, Christian Alvarez and Marco Bolano.

“We lost 12 of our players from last years team, but our guys have great chemistry and are playing really well together right now,” said Guerra on his teams overall performance so far this 2015 baseball season.

It wasn’t until the sixth inning that Keys Gate Charter finally knocked a run across to avoid the shutout. After a one-out single from senior Anthony Miano started the inning for the Knights, Miano was driven in on a RBI double from freshman Omar Baldo.

The Panthers answered again and tacked on two more runs in the bottom of the sixth, putting into effect the ten-run rule.

“We didn’t capitalize with runners in scoring position, and we just need to be better at that,” said Knights Manager Kevin Mirabal. “Better defense and better offense and we will win games.”