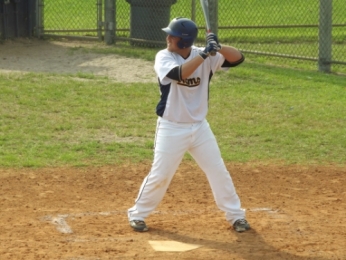 Alejandro Castro stands in against his counterpart, Christopher Rodriguez.

Alejandro Castro did it at the plate and on the mound Monday for Coral Park as it edged Miami Senior 3-2 with Castro’s walk-off single in the eighth inning in the Luis Brande Spring Classic.

Castro, a junior left-hander, allowed five hits, struck out six and walked three in six and two-thirds innings of work. Castro left the game with a tie in the sixth inning and received a no-decision. Relief pitcher Reinaldo Cabello earned the win.

For Miami Senior Stingarees starter Rodriguez, ten strikeouts wasn’t enough to get the victory for the Stingarees. In seven and two-thirds innings, Rodriguez allowed just six hits and two runs while walking one.

“We received great pitching, good defense, and our bats were working today,” Coral Park Manager Juan Carnicero said. “These are how all of our games have gone for us this year, one or two runs, one or two innings decides the game. This time we were on the right side of those innings.”

It took Castro some time to get his mojo going as he allowed two runs in the first inning. Ray Bianco led off with a walk, advanced to second with a stolen base and to third with a fielder’s choice. Castro then threw a pitch that nipped junior Argenis Hernandez in the elbow, placing Bianco at third and Hernandez at first with Rodriguez coming to bat. After a ball squeaked by the catcher allowing Bianco to score for the first run of the game and Hernandez to advance a base, Rodriguez helped himself with an RBI single that plated Hernandez,d giving the Stingarees an early 2-0 lead.

It didn’t take long for the Rams to answer back. In their half of the first, after a leadoff strikeout followed by a hit batsman, a stolen base, another strikeout and a routine groundball turned into a botched play in the infield. The infield error allowed senior Bryan Grafton to score and make the game 2-1. 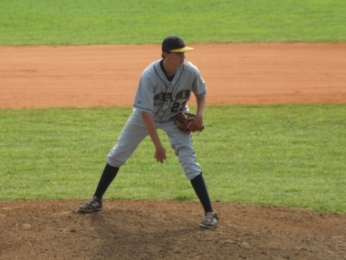 Christopher Rodriguez gets his sign from the catcher Monday morning.

The game remained at that score until the bottom of the fourth when senior Ramon Ferreiro laced a single into the outfield to start the Rams’ half of the inning. After the single, Castro was plunked on his non-throwing elbow and took first base. With runners on first and second, Rodriguez was able to dial up a pitcher’s best friend, the old 4-6-3 double play. After the double play, it looked as if the Rams were deflated, but sophomore Erik Estevez must have did something right in the eyes of the baseball gods watching. Esteves chased strike three in the dirt and watched the ball bounce up and kick away from the catcher. Capitalizing on the play was Ferreiro as he came across, knotting the game at 2.

The next three and a half innings remained scoreless. In the top of the eighth, Coral Park sent Reinaldo Cabello out for his first full inning of work. Cabello plunked the first batter and then as if it was previously planned picked him off the very next moment. The next two batters made outs via the fly ball and ground ball. Just like that we are onto the Rams half of the eighth inning, prepare for fireworks.

Miami Senior sent out Rodriguez for his eighth inning of work as he was feeling it all game. The first batter Rodriguez faced he struck out but the ball got away from the catcher and allowed Bryan Grafton to advance to first base. Alejandro Vazquez was hit by a Rodriguez fastball, and with that, there were Rams on first and second with no outs. Ramon Ferreiro reached first on a fielder’s choice that went back to Rodriguez, who elected to get the lead runner at third base. With Vazquez on second and Ferreiro on first, Castro came to bat. The left-handed swinging Castro delivered a line-drive single just over the outstretched arm of the third baseman. The ball was fielded and quickly fired to home plate, but Vazuez beat the throw and the Rams walked off to end it.

“The win was good,” Carnicero said. “We have been on the other side, so I know how it feels, I am glad we pulled this one out.”

Coral Park takes on the IMater Knights at 10 a.m. today at Coral Park. Miami Senior plays at 1 p.m. at Coral Park against the Westland Hialeah Wildcats (9-6).