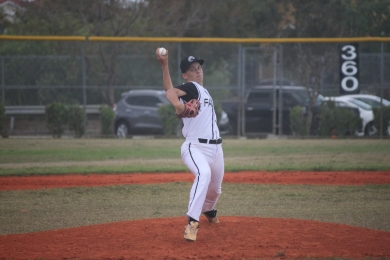 Sometimes a new face can have an impact in a game when you’re looking for a veteran to step up. Ferguson Manager Jose Novas was looking for a consistent arm, and after going through two pitchers during the first two innings; he found it in sophomore Alejandro Vieiro. Only on the varsity squad for a week, Vieiro is already making a name for himself.

“He got moved up last week from JV,” said Novas. “He was throwing the ball really well on JV and was pretty dominant. We needed a guy to come in and throw strikes and I was expecting him to do well and he did. If he’s hitting his spots and pounding the zone he can be very effective.”

Vieiro entered down a run with the Coral Reef Barracudas, but turned it into a 7-6 victory. He was lights out for the most of his part of the night, piling up six strikeouts in four innings of work. He only allowed two hits in the seventh inning, before being pulled from the game.

“We were having trouble throwing strikes,” said Vieiro. “I just came in and did my best to pound the zone and get out of the inning, and keep our team in the game.”

Vieiro eventually cooled down to open up the seventh, giving up a leadoff single and a double to Dylan Gonzalez and Alex Hartrett, respectively. Novas pulled Vieiro, but the Barracudas would keep applying the pressure. Nate Rosa pulled the ‘Cudas in by two runs with a two-RBI single, scoring Gonzalez and Hartrett. They later added another run on a grounder by Nick Carballo.

Novas then found the answer to silence the ‘Cudas rally in senior Sergio Ramos. Asking for the ball, Ramos entered the game with bases loaded and one out and ended the ‘Cudas rally a run short. 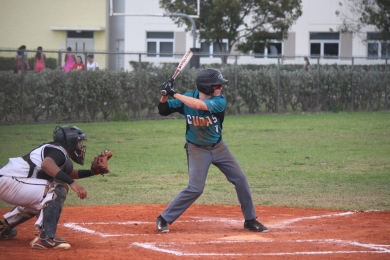 “Coming off a tough district loss, we’ve been of the losing path and I just wanted to get a win,” said Ramos. “I came in, threw strikes and we were able to get the win today.”

The Falcons (6-9) attacked early, scoring in each of the first three innings for a total of five runs. Alex Vazquez started the Falcons off with a sacrifice fly that plated Christian Martinez in the first inning. The ‘Cudas answered with patience in the second inning, drawing six walks and scoring three runs.

The Falcons erased the 3-1 deficit in the next two innings for a 5-3 lead. Ferguson came alive again during the sixth inning, scoring two more runs that proved crucial to their victory. Coming in as a pinch-hitter, Alexander Soto drove in Christian Abad, and Vazquez drove in his second run of the day to open a four-run advantage.