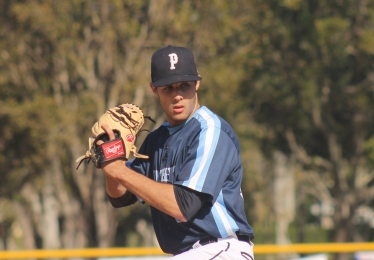 Palmetto’s Felix Garcia threw a no-hitter and faced just one batter over the minimum.

Felix Garcia loves to pitch. The Palmetto right-hander plays for the sheer thrill and enjoyment that comes with each throw. Playing the game is its own reward, and it is truly an inspiration to see guys like Garcia embrace baseball at its core.

On a beautiful spring afternoon at his home field at Coral Reef Park, the universe smiled down to enjoy a special moment for Felix Garcia and the Palmetto baseball team. Garcia was nearly untouchable, cruising his way to a no-hit, 10-0 victory over district foe Miami Sunset.

Garcia faced just one batter over the minimum, and he fanned five to improve his record to 5-0 on the season. The right-hander needed just 56 total pitches, and 40 of those found the strike zone. Early on it was clear that he was locked in, and Garcia seemed to have tunnel vision that only included everything between himself and the short distance from the mound to catcher Carl Heldt’s glove.

“It feels good. I don’t know; I am just going at every hitter one at a time,” Garcia said. “I love coming out here and I love pitching. It was just another game; I was just very excited to come out and start. It was an incredible job by the offense today. They were on top of the ball, and so pounding the strike zone was all I had to do.”

Most importantly, the Panthers (8-1) picked up another district win to improve to 5-0 atop the standings in 8A-16. Palmetto was coming off a big extra-inning victory over South Dade on Tuesday, and it has been getting great team baseball from everyone on the roster.

“We’re on a roll and we’re playing together,” Panthers Manager Danny Smith said. “We are playing the game the way it needs to be played and we’re playing the game the way we teach them to play. If we continue to do these things, good things will happen. There are going to be bumps; somewhere there are going to be bumps. There will be a base hit that doesn’t fall in or a pitcher that does no throw a strike that we asked him to. But right now we are enjoying the ride, and we will continue with that.”

Most no-hitters include some big plays, and on Thursday there was one such instance. The Panthers second baseman Toister chased down a sharp liner from Robert Hernandez, got a glove on it and made the throw to the first baseman Vizcaino. 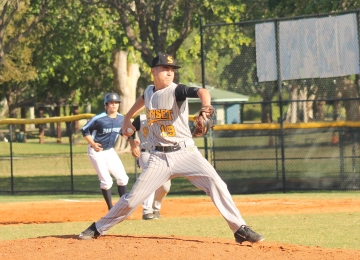 Frank Melero struck out two in an inning and two-thirds relief work.

With their pitcher dialed in, all the Panthers had to do was attack on offense and provide some run support. The batters did just that, hitting around the order in the first inning to give Garcia more than enough cushion with a 6-0 advantage.

Palmetto got a bit of everything in the first to make it happen. Keaton Zargham walked, Mike Roman bounced a single up the middle and Kevin Barbato walked to load the bases. Heldt followed with an infield, RBI single to plate Zargham, and Erik Largo perfectly executed a suicide-squeeze bunt for another RBI single.

Nick Vizcaino delivered the big dagger when he split the left-center field gap for a double that scored Largo and courtesy-runner Frederick Schaefer. Kyle Toister completed the big first inning by staying back on a pitch and blooping an RBI single into shallow right field. Heldt later added an RBI single, Vizcaino drove in a runner on an infield ground out in the third, and Carter Nash finished things off with a two-RBI double in the fourth.

Even before he would allow himself to bask in the glow of a victory, Coach Smith reflected on the bigger picture of what made him the happiest on this fine spring day. Across the field he was pleased to see Sunset Manager Armando Pelaez with the team again, after health issues had forced the Knights skipper to take a leave of absence for some time.

“No matter what the outcome of the game is, no matter what the score is, and no matter who wins or loses, what’s important to me is that their Manager is healthy,” Smith said. “I have a wife that went through cancer, and when you have a friend that is going through something like that all this doesn’t matter. What matters to me is that man is healthy. My wife is a cancer survivor, and to see what she went through was heart-breaking. For him to come out here and be out here with what he is going through, that tells you how much he cares and what type of man he is. I am proud of him.”

While Pelaez is still working his way back into playing shape, there is no doubt the best medicine has been to be back on the baseball field. It was a genuine smile on his face to be in uniform and coaching the guys, back with a loyal and dedicated coaching staff that has worked tirelessly to fill his shoes while he was away.

“It was a personal battle for me, but this is one of the things that got me to fight to come back as soon as I can,” Pelaez said. “I want to see them be successful in everything that they do. Personally, for me, it is nice to be out here. But I want to see them succeed as well.”

Sunset (2-6) struggled against the red-hot Panthers, and is now 1-5 in a tough district chase. Starter Pablo Cabrera lasted into the third, where Frank Melero turned in a nice relief appearance. The right-hander got out of a jam in the third by snaring a sharp liner right back to him and then firing to third for the 1-5 double play.

Unfortunately, the day did not provide many other big moments for the young Knights. Pelaez said they are not focusing on the little things, and when they fall behind they lack the confidence to battle back. The coaches are teaching them to deal with that and learn how to overcome it. They have got a young team with a lot of new transfers, and they haven’t really believed in the system yet. The coaches ask them to take pride in all the little things and let that carry over between the lines.

“I keep trying to tell these guys that it is the little things that you do throughout the day and in practice,” Pelaez said. “With young kids that haven’t had the experience it can be tough. We are teaching them how to pitch, so it is a rebuilding year for us. We are just teaching all the kids. We do have a lot of ninth and tenth-graders that have some talent, so we are going to start playing them and see what we can do to change this around. This is as low as it has ever been here and we’re not used to it.”