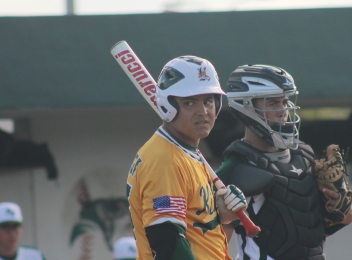 Killian’s Eddy Arteaga had a monster day, going 4-for-5 with two RBIs and a crucial solo home run in the seventh.

Baseball is a game of failure. What makes a ball player great is when he overcomes failure to find success when his team needs it the most.

Tuesday evening Killian’s Sneaky Guzman illustrated this fact by getting a bunt down on a crucial play. Guzman got the job done on a risky suicide-squeeze play in the top of the eighth inning, helping to lead visiting Killian to an exciting 9-7 victory over Varela.

Sebastian Gonzalez led off extra innings with a double deep to center field, and Daniel Trillo moved him to third with a sacrifice bunt. This brought up Guzman, who managed to line up his chance just right on the second pitch he saw, scoring Sebastian, before he also scored in the inning on a throwing error that provided a bit more cushion.

“I failed many times, and then this time that we were tied I had the pressure on me,” Guzman said. “I had to get the bunt down and I did, and I got the RBI out of it. Sebastian Gonzalez got a double and Trillo got him over, so I just did my job and bunted him in.”

“Every game that we play in this district is going to be an extremely difficult game,” Killian Manager Angel Herrera said. “There are a lot of quality clubs and it is a very competitive district. You will take any chance that you have to go on the road and get a win against a Varela team that has been playing tremendous baseball. John really has his boys playing really well; they played hard and I tip my cap to them. They had a good game and those guys fought hard and gave us everything we could handle. We’re just thankful to get out of here with a win.”

Varela battled throughout, at one point coming back from a five-run deficit. The Vipers got on the board in the first when Erickson Canoura scored on an error, and then battled back after falling behind later in the contest. After Killian clean-up hitter Eddy Arteaga clubbed a solo home run to make it 7-4 in the top of the seventh, Varela found itself needing a three-spot against Cougars closer Eddy Demurias with its final swings. Jaymark Garcia was hit by a pitch and Canoura followed by lining a single to center to bring the tying run to the plate in the form of Chris Allende.

Allende wasted no time, jumping on his first offering and soaring it deep over the left field fence for the tying, three-run homer his club so desperately needed. Suddenly it was a whole new ball game, one that would need extra innings to decide.

“We got a few base-runners on and Allende came through with a huge homer there,” Varela Manager John Barbato said. “People say solo home runs don’t hurt you, but that solo home run in the top of the seventh killed us because we would have walked them off otherwise. But that’s the way it goes. We’re frustrated because we had a chance to win, but Killian did what they had to do and you have to tip your hat to them. It was a great game. They won, but hey, there is more baseball left to be played.” 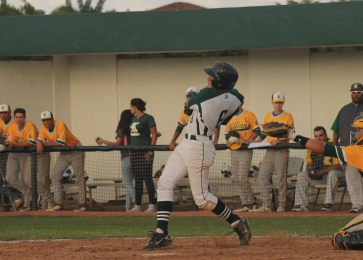 Varela’s Chris Allende clubs a three-run home run to tie the game in the bottom of the seventh.

Barbato admits he cannot complain with having a 6-2 overall record, as well as being the hunted ones at the top of the district. His guys have worked hard and they don’t give up, and even despite Tuesday’s loss the players showed that same grit and fight that has helped them reach where they are. At the same time, one cannot get complacent and expect everything is going to go your way without giving that extra little effort that ensures it will happen.

“It is amazing how quickly momentum can change in a high school game,” Barbato said. “All the momentum was ours until in the fourth when our starter gave up an 0-2 base hit, and then he gave up a 1-2 base hit. You have to put away hitters when you have an 0-2 count, a 1-2 count. They have to hit something that is yours and you cannot just groom it. I think that was a big momentum-changer.”

In the fourth, Killian grabbed the lead with a pair of runs. Demurias and Arteaga both singled, and Demurais came home on an error to even the score. Varela then elected to intentionally walk catcher Herbert Iser to try and set up a double play. The strategy worked when Keith Stevens hit one straight to shortstop JC Garcia, who stepped on second and fired to first baseman Bryan Rojas for the 6-3 double play. But Stevens delivered on the play, as Arteaga scored to put Killian ahead for good.

Arteaga had himself a big day to provide crucial runs for his squad. The big lefty collected four hits in five at bats, including an RBI single as part of a four-run fifth inning that put Killian up 6-1. His solo home run in the seventh proved to be his most important contribution on the day.

“The past few games I had been having bad at bats, so this game I was just trying to let it go out and it kind of work,” Arteaga said. “I just tried to get a hit, and it ended up to be a home run. It worked out.”

Killian extended its winning streak over the rival Vipers to 10 games, dating back to 2010.