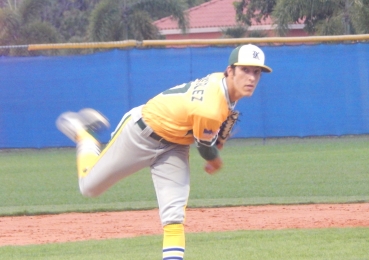 The Killian Cougars continued their reign as the hottest team in District 8A-16 with their fifth consecutive victory overall, and third straight district win on Tuesday. The Cougars won 3-0 behind starting pitcher Joey Gonzalez’s complete-game shutout over district rival South Dade at South Dade. Killian improved to 8-3 overall and 4-1 in the district, while the Bucs fell to 3-4 in the district.

Gonzalez seemed to get stronger as he went deeper into the game.

“Towards the beginning, I was struggling with my command a little bit,” Joey said. “I just made some in-game adjustments and got stronger.”

He allowed just three hits and recorded 12 strikeouts. The right-hander struck out the side in the final inning to put an exclamation point on a dominating start.

“The performance from my baseball team was absolutely phenomenal,” Killian Manager Angel Herrera said. “How about the start by Joey Gonzalez? The pitcher I saw today against the defending state champions, and striking out twelve, was absolutely brilliant. Hats off to Joey Gonzalez tonight.”

On the offensive side, senior Eddy Demurias hit a two-run home run over the left field wall in the third inning. In a game where runs were at a premium, the longball provided the separation that Gonzalez would need to continue his shutout.

“Today, this win, was done by them,” Herrera said. “All credit goes to my team; starting off with the hearts and souls of this team, which are Eddy Demurias and Joey Gonzalez.”

In the second inning, Joey ran into trouble by walking the first batter. An infield error set up the Buccaneers (7-4) with runners on first and third with just one out. Joey Gonzalez was able to escape the jam by getting the next batter to pop out in the infield, and then striking out the final threat in the inning.

The next top half of the inning, Demurias took advantage of a hanging breaking ball for all the offense Killian needed. The Cougars’ second baseman was thrilled to provide the support his pitcher needed.

“I got a hanging change-up, put a good swing on it, and put us on the board,” Demurias said. “I knew we had the right guy on the mound. Throughout the game, I never doubted he was going to get the job done. He’s such a competitor that I knew he was going to give us the best shot to win.” 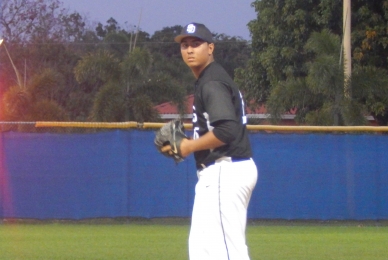 South Dade's Kendrick Pico was one out away from a complete game.

On the other side of the mound, Buccaneers starting pitcher Kendrick Pico had a solid performance with three runs allowed in six and two-third innings of work. South Dade Manager Fred Burnside was content with Pico’s start.

“I couldn’t have asked for more from Kendrick on the mound,” Burnside said.

South Dade’s batters had some strong swings and drove the ball when they made contact, but failed to get on the board. Burnside hopes the team picks up district play closer to playoff time.

“What matters is how you are playing in April,” Burnside said. “Hopefully, we are one of those teams playing well at the end.”

Meanwhile, Herrera’s squad is now third in the district standings behind Varela and Palmetto. But the Killian skipper is confident in the team he has moving forward this season.