Trace Norkus had a big day on the mound and at the plate to lead Westminster Academy past Cypress Bay.

The Final Four won and earned their spots in the Gold Bracket semifinals of the inaugural HSBN March Madness Shootout, presented by Galeo Spices. With most brackets likely busted following two wild and unpredictable rounds of play, #7 seed Westminster Academy is now the highest seed remaining. The Lions beat #15 Cypress Bay 7-2 Monday night to advance, where they will face #14 Coral Gables after the Cavaliers beat #6 Belen Jesuit 11-2.

Across the bracket is another cross-county pairing. Proving there truly is magic to the #12 seed, Pine Crest edged #4 Braddock 1-0 to keep the magic alive. The Panthers will now face another Miami-Dade powerhouse in Mater Academy, as the Lions defeated #16 West Broward 7-2 to also advance.

Pine Crest was electrified by the return to the mound for veteran Adam Saks. The senior tossed five shutout innings, allowing one hit and recording two strikeouts. Reliever Sam Wurth kept the shutout intact with two scoreless frames to earn the win, after Pine Crest scored the lone run of the night in the sixth.

These four teams play again on Tuesday to determine who will advance to the championship of the March Madness Shootout presented by Galeo Spices.

“We beat Benjamin on Saturday with our bats. Today, against one of the best teams in Dade County, we did it with pitching and defense,” Pine Crest Manager Wayne Stofsky said. “Saks and Wurth were lights out. This is a huge win for our program.”

Mater Academy had the challenge of facing one of the hottest teams in the Shootout, after West Broward upset top-seeded Archbishop McCarthy on Saturday. The Lions rode a big six-run third inning to cool off the Bobcats, powered by a two-RBI double from Chris Cabrera. Cabrera was 2-for-3 with three RBIs, and Alex Rodriguez added a two-RBI single.

“West Broward puts together a good program year in and year out, and we knew we were going to play a very fundamentally-sound team and they were going to do all the little things to win the game,” Mater Manager Mike DiRosa said. “Our guys just had to come in and execute the way we can play and the way we can swing the bats. We had to make adjustments to their pitching, and our guys actually made adjustments today at the plate. We played pretty solid defense and I cannot complain about that. Overall we had a pretty good performance.”

Another Lions team also kept its title hopes alive, as Westminster Academy held off the Lightning Monday night in Weston. Trace Norkus earned the win on the mound, and he ignited his offense with a big home run. He was 2-for-3 with two runs and three RBIs.

“We were able to capitalize on a big swing late from Trace Norkus, and the team rallied from there,” Westminster Manager Nick James said. “The guys did a nice job of staying patient and waiting for scoring opportunities. Cypress Bay jumped on us a bit early, but we battled back waiting for some quality pitches to hit.”

Westminster collected 12 hits total, as Cory Acton also homered and went 2-for-3. Thomas Messer and Luis Leal had two hits each. Alfonso Sosa drove in a pair on a 1-for-3 night. 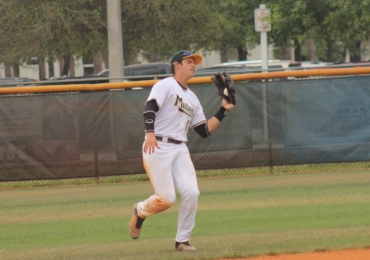 “In an event like this your hitters really have to battle and build a pitch count. I thought we did great with our two-strike approaches,” James said. “We were very competitive at the plate, putting some pressure on their defense and giving us a chance to be successful. I’m proud of the guys efforts. Once again, it is a great tournament that we are enjoying, and we are enjoying the opportunity to compete and play.”

The Lightning jumped ahead early, as Hector Lozada and Joey Rodriguez had RBI singles in the top of the first. Rodriguez reached base four times and stole two bases.

Coral Gables also rode a big day from the offense and a strong outing from its starter to get a shot at Westminster Academy. Elih Marrero was 4-for-4 with a double, two runs and three RBIs, and Rolando Rodriguez contributed a pair of doubles. Anthony Valdes was 3-for-5 with three runs and Coco Montes drove in three.

On the mound, the Cavaliers got a great start from Tyler Santana to match the offensive production. Santa held the Wolverines to one hit in six innings, striking out seven.

“Basically, it was a great overall performance from out guys,” Cavaliers Manager Phil Wisser said. “Our guys did a phenomenal job, and Tyler Santana was remarkable. He went six innings and only gave up a single in the first on a dribbler, and he really mowed them down the rest of the game. Offensively we got going; and to see Elih Marrero break out was really big for us, because he has hit but he has not been himself. We had 14 hits and we are really starting to get going. It was a great team win today.”