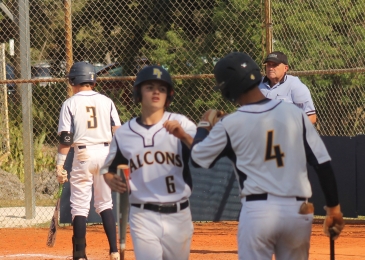 The Falcons had plenty of reasons to celebrate in Tuesday’s big win.

Jarrett Pico set the tone with the first pitch he saw Tuesday, and the rest of his Palmer Trinity teammates were quick to follow his lead. The Falcons shortstop belted a solo home run to open the door for an offensive barrage, leading host Palmer Trinity to an 11-1 victory over the visiting Dolphins.

The Falcons (12-2) pounded out 17 hits in all, including nine extra-base hits. Every starter got in on the action to help pave the way to the team’s fourth consecutive victory. They also remained unbeaten at home with a perfect 7-0 record on the season.

“It’s been good for them so far,” Falcons Manager Donnie Harvey said. “We were short a couple of guys today and the other guys stepped up and got it done. So yeah, it has been fun. We’re finding ways to win games in low-scoring games. We only scored two runs Friday night and four runs yesterday, but found ways to win. Today the bats exploded a little bit, so it has been fun.”

Perhaps no one had as much fun on Tuesday as Pico. The junior piled up four hits, two runs and three RBI’s to set the tone for the day.

“Hitting definitely gets contagious,” Pico said. “Today we were short two of our best guys, Evan Steinman and Blake Miller. But I think collectively we all took some of the slack and we all had good approaches and made solid contact. When you put the ball in play good things happen.”

Pico was just a triple short of hitting for the cycle. Needing a three-bagger to accomplish one of the game’s most challenging feats, he made solid contact in his final at bat to drive the ball deep to right field. With his speed he was sure to reach third on the hit, except the umpire ruled that the ball rolled under the fence for a ground-rule double.

“It’s not really up to me; all I can do is put a good swing on the ball,” Pico said. “That’s all I was looking to do in that at bat. Whether it’s a double, a homer, I don’t really care. It’s just a good swing, and that is what I am trying to do every at bat is put good swings on the ball.” 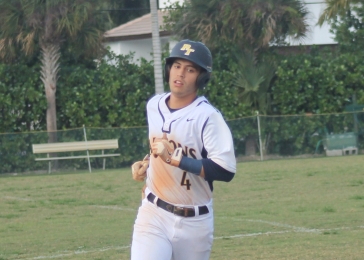 The Falcons got plenty of good swings in. The club sent 11 batters to the plate in the first to erase a 1-0 deficit with a six-run frame. Justin Kross and Matt Roberts delivered RBI doubles, while Zachary Peckins and Quentin Wheeler added RBI singles. Following his leadoff homer, Pico came back around to contribute an RBI single his second time at the dish in the first.

Nick Font kept the excitement going in the bottom of the second when he too led off by belting the first pitch for a solo home run. Font also had a big day at the plate, going 3-for-4 with three RBIs.

“They always teach us to sit back and wait on it and go to right field. If they throw it in your wheel-house, turn on it and stroke it,” Font said. “That’s what everybody was doing today. As soon as Pico started it off with a first-pitch home run in the first inning the momentum just kind of built up for everybody. Everybody was hitting it hard.”

The Dolphins (4-12) also hit the ball hard, although it did not lead to the same amount of success. Marathon had nice at bats and was effective at putting the ball in play, but also seemed to be snake-bitten when several solid connections in big moments went directly at the Falcons’ defense.

The team’s biggest chance to get back into the game came in the top of the second after it loaded the bases when Randy Culmer was hit by a pitch, Clay Daniels singled and Robi Garcia drew a walk. Jack Hill then stung a pitch, but the liner went right into Pico’s glove, and the shortstop beat the base runner back to the bag for an unassisted, inning-ending double play.

“The effort is there and I thought we swung the bats well today,” Marathon Manager Luis Leal said. “We just hit a lot of balls right at their guys today. We hit a lot of hard balls and it was just unfortunate. It was tough getting any momentum, but the effort is there. The pitchers were throwing strikes, but Palmer came out swinging today. But overall I think we are putting it together at the right time and I think we’ll be all right.”

Marathon had a tough start to the season as a young roster has worked to learn the ropes at the varsity level. As the club heads into the second half of its schedule, it is confident that the players will continue to grow and improve quickly. Signs of that growth were evident on Tuesday, most notably in the hitters’ approaches at the plate. 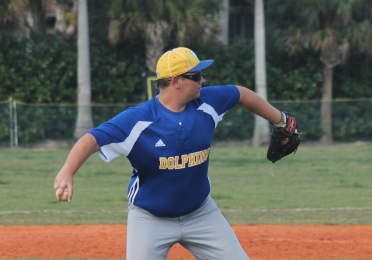 Marathon third baseman Mark Keller had an unassisted double play in the bottom of the second inning.

“That is something that we have worked on,” Leal admitted. “We struggled at the beginning and we were having somewhere between six and eight strikeouts per game the first few weeks. But we have cut down on that as a team and we have worked hard at it all season. That’s one of the big positives we have had is our approach has been much better and we’re putting the ball in play. We just have to do better to make stuff happen, and be better on the bases when we do have chances.”

Marathon got to Falcons starter Matt Roberts for a run in the first. Jack Hill hit a leadoff single up the middle, Frank Gonzalez poked a single to center, and then both runners advanced into scoring position on a wild pitch. Max Elliott got the ball on the ground for an RBI ground out that drove home Hill for the early 1-0 advantage.

Roberts settled in after that, throwing four solid innings to earn the victory. The right-hander scattered three hits and a walk, while also hitting one batter and recording two strikeouts.

Dillon Jones pitched a scoreless fifth to close things out. Although Jones surrendered singles to Gonzalez and Elliott that loaded the bases, he avoided trouble by inducing a ground ball to third base to end the contest. Jones picked up three strikeouts in the inning, with Clay Daniels reaching base on an error to start the fifth.