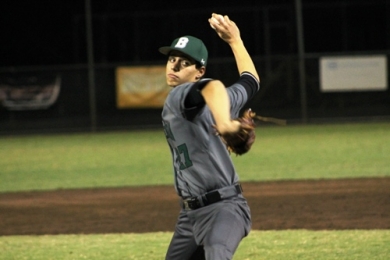 Marc Perez threw a scoreless inning for the Sabres.

American Heritage and St. Brendan came into Thursday night’s matchup with the expectation that it would take a lot of runs to win the game. Each has a reputation of having a strong offense, and neither team disappointed in that area on this night.

The visiting Sabres sent a message scoring two runs in the first, but it was the Patriots who responded with the next eight runs en route to a 8-4 cross-county win.

“This is the reason I come up here to play these quality teams,” said St. Brendan Manager Luis Padron. “You may not always come away with a win, but it is always a good learning experience for these young men. You can’t come up here and not have your best game if you are going to beat high quality teams like this.”

The Sabres appeared headed in the right direction in the top of the first. In the inning, St. Brendan’s built their 2-0 lead after Benito Varela reached on catcher’s interference, Nico Lares walked, and Ryan Hernandez and Tyler Paige hit back to back RBI singles.

In their half of the inning, Heritage quickly responded with four of their 12 hits on the night. Louis Almanzar led off with a single, while Alex Kushner, Justin Lamazares, and Joe Perez also had hits, giving the Patriots a 3-2 lead.

“Anytime you give up the lead in the first, and then come right back and take the lead back, that is going to change momentum,” said Patriots Manager Bruce Aven. “Our bats have been hot lately, and that continued tonight.”

In their past three games coming into the battle with St. Brendan, Heritage had scored 27 runs.

The second inning proved to be even better for the Patriots, as they sent nine batters to the plate, and scored five runs, stretching their lead to 8-2.

Justin Hernandez, who is going to college on a pitching scholarship, received rare plate opportunities and started the rally for Heritage with a single.

“He’s a guy that we made sure got his scholarship for pitching, but he is a good high school hitter,” said Aven. “He got us going there in the second.”

Kushner followed with his second hit of the game, and Lamazares delivered the game’s first big blow, a three-run homer to right-center. Lamazares finished the night 3-for-4, with four RBIs.

“He’s been doing that for us all year,” said Aven.

As for the approach, Lamazares claims it is one coaches have been preaching all year.

“We’re pretty good when we hit the ball up the middle and the other way, and we did that a lot tonight,” he said. “Our coaches are always telling us to use the middle of the field and work the other way.” 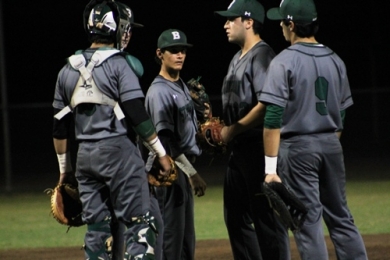 St. Brendan infielders talk things over on the mound.

David Villar, not to be outdone, followed Lamazares’ blast with one of his own. Two more hits, off the bats of Chase Reyes and Jacob Pino, completed the five run inning.

The Sabres tried to battle back in the third, Varela and Hernandez singled, and Max Pinto hit a two-RBI double, cutting the lead to 8-4, but that would be as close as St. Brendan would get.

In the fifth, Heritage turned the ball over to Richie Cruz, in relief of Taylor D’Agostino and Michael Cortelli, who threw two innings each. Cruz did what any good stopper would do, throwing two shutout innings.

“It was my job today to come in and slow down their offense,” said Cruz. “I just tried to work ahead and hit my spots.”

Donovan Futrell pitched the seventh to shut the door on the Sabres.

Things don’t get any easier for the Patriots tomorrow, as they go on the road to face former Manager Todd Fitz-Gerald and the Douglas Eagles at 3:45.

St. Brendan is off until next week when they face district opponent Booker T. Washington before a big matchup with rival Monsignor Pace.