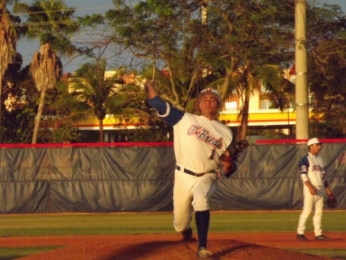 Starting pitchers Nicholas Cruz and Giovanni Arriera both pitched into the fourth inning, as Westland Hialeah defeated the Hialeah Thoroughbreds 2-1 to move to 6-7-1 on the year.

It was Ogandys Diaz that started off the decisive inning with a hit in the top of the seventh. This time he laced a single through the hole at short and third. Diaz reached base twice, and scored twice. After the next batter flew out to the second baseman, freshman three-hole hitter Evander Hernandez. Hernandez got into one and sent the ball off the wall for an RBI triple. That was all Westland would need to obtain the win as Hialeah couldn’t answer in the bottom half of the seventh.

Both pitchers matched each other seemingly pitch for pitch early on. Through the first two innings, both Cruz and Arriera pitched scoreless halves and tallied up their share of strikeouts. The two pitchers allowed just two hits in the first two innings as it set the stage for an old-fashioned pitchers dual. Each pitcher relied on adreniline early as Arriera struck out five and Cruz fanned three.

Although the strikeout numbers were prevalent Thursday, it seemed the outcome would come down to whoever scored first. Sure enough, the team that scored first won.

That distinction came in the top of the fourth inning. The leadoff batter Diaz roped a double to the right-center field gap to start the inning. A bunt base hit put the next batter, Ronel Rodriguez, on first and Diaz on third for Hernandez. After Rodriguez was picked off at second on a steal attempt, Hernandez walked on four pitches. Bryan Lavastida stepped up and drove in Diaz on a sacrifice fly to center field. That would be all for the Wildcats in the third.

After the Wildcats scored the first run of the game, Arriera went back to work and struck out three of the four Thoroughbred batters he faced. Arriera finished his outing with four innings pitched, he recorded 11 strikeouts, walked three and allowed just two hits. He received a no-decision after the Thoroughbreds tied the game in the fifth.

“We played well tonight, but there are still things we need to work on,” said Westland Hialeah Manager Jose Alvarez. “The defense was pretty good and our pitching was good, but we had some blunders on the base paths. Giovanni Arriera always goes out for us and pitches his best every time. We are used to the power stuff he has and feel confident every time he pitches.”

After Arriera was lifted, reliever Kevin Madera came in and gave up a leadoff double to Alexis Figueroa. A bunt single placed runners on first and second for Ramid Alvarez. After a double steal advanced Figueroa and Alvarez a balk brought in the tying run. With a runner ninety feet away from giving the Thoroughbreds the lead, Madera used an absolutely filthy curveball to get Alvarez swinging. He then bucked Reyes as he was caught looking for the final out of the inning.

The top of the Wildcats half of the sixth started with a single from sophomore David Vazquez. The momentum was swinging back to the Wildcats until the Vazquez was caught stealing, which put a damper on their inning. With two outs, Luis Jose took a 3-2 fastball over the head of the center fielder for a triple. With the pressure on, the Wildcats Randy Bauta walked, putting guys on the corners. But a strikeout ended that threat.

Hialeah (5-8-1) is back in action on March at Pepper Park against the North Miami Pioneers at 3:30 pm. Westland Hialeah hosts Miami Springs on March 20th at Walker Park at 3:30 pm.