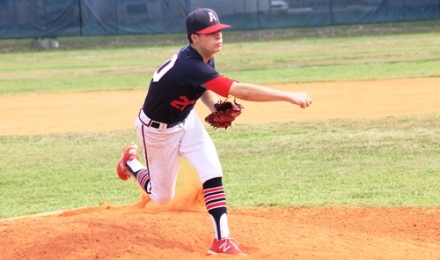 Brandon Abdala threw 3.2 strong innings in relief for the Patriots.

American Heritage and American have both had their shares of up and downs this season. The two teams have taken turns looking like they had the potential to either lose in the early rounds of the playoffs, or make a deep state title run.

On Wednesday, it was Heritage that was on the upswing, as their top two hitters, Louis Almanzar and Chase Reyes combined to reach base nine times and lead the Patriots to a 5-3 win over American.

“Our approach was to just be patient and look to hit the ball middle away,” said Reyes, who was 4-for-4, with a sacrifice bunt on the day. “We had some good swings early, and we were able to get on base for the guys behind us.”

Almanzar was just as impressive on this afternoon, going 1-for-1, with four walks and two runs. The top of the order got the attention of American Manager Bruce Aven.

“They really did their job today,” said Aven. “We had several chances to break this game open, and we weren’t able to come up with those big hits with runners on base. But the top of the order certainly set the table for us.”

Heritage had a chance to blow the game open in the first inning, when it scored two runs and left the bases loaded off American starter Mike Rodriguez.

In the second, Heritage tacked on another run, extending the lead to 3-0.

“In games like this against top competition, you can’t spot them a three-run lead in the first two innings,” said American Manager Ricky Gutierrez. “It’s hard to come back from that.”

Israel Cordero made sure that any comeback attempt would be for naught. The Heritage starter went four and two-third innings, giving up only three hits and two runs, while striking out three. Cordero has emerged as one of the top starters for Heritage this season.

“He has really pitched well for us,” said Aven. “He goes out there and gives us quality innings, and he did that again today. He has really stepped up on this pitching staff.”

“Once we got those three runs, it was just a matter of making sure I was hitting my spots,” said Cordero. “We knew they had some good hitters, and that early lead allowed me to pitch a little differently. It was a big boost for us.”

American made some noise in the fifth inning when they cut the lead to 3-2. Robbie Mendez led off the frame with a single, stole second, and after a Victor Cabrera walk and a flyout, scored on a Jhonny Jones single. Justin Neo then hit an RBI groundout to trim the lead to one. 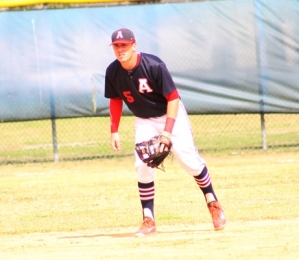 Romy Gonzalez and the Patriots could not get going offensively Wednesday.

Heritage answered those two runs with one of its own in the top of the sixth. Sebastian Enciso led off the inning with a double to right-center, followed by an Almanzar base hit. Justin Lamazares’ ground ball to second plated Enciso, extending the lead to 4-2.

In the seventh, Heritage added another insurance run, leaving Baily Mantilla to protect a three-run lead.

American did its best to make it a game in the seventh. After two quick outs, Neo walked, and Romy Gonzalez reached on an error. After a wild pitch scored Neo, suddenly the Patriots had the tying run at the plate. John Ham proceeded to walk, putting the tying run on base, but Mantilla induced a first-pitch ground ball to short off the bat of Mike Montes to end the threat and the game.

For Heritage, the win is number 15 on the season, and the guys are finally starting to gel as a team.

“We’ve been a little up and down all year,” said Aven. “We never know what team is going to show up. But the key of the entire season is to try and find out where guys fit in the lineup and their roles on the mound. That is starting to come together for us, and hopefully we can play consistently heading into the playoffs.”

For the defending state-champion Patriots, the task may not be as easy.

“I always shoot straight, and the truth is, this year is going to be tough,” said Gutierrez. “Our district is no easy run this year, so just getting out of the district will be tough, and that isn’t even counting the teams that will be waiting in regionals. We have to get more consistent, and we have to do it quickly.”