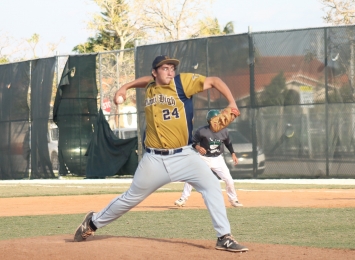 The Miami Stingarees have used a reliable formula in their games this season, and that has been to capitalize on big innings and then ride its great pitching to victory. In Thursday’s HSBN Miami-Dade Game of the Week at Hialeah Gardens, the formula remained true to form as Miami scored all its runs in one inning and rode strong pitching to a 4-1 victory over the rival Gladiators.

The Stings busted out for four runs in the second inning, then leaned on its strong pitching and defense to maintain that lead the rest of the way. Stingarees right-handed senior starter Andy Escono went three solid innings for the win, and senior veteran reliever Edgar Aparicio followed with four strong frames to seal the victory and earn his third save of the season.

“Pitching has been keeping us where we are right now,” Miami Manager Frank Suarez said. “In my 13 years as the coach here I have never had the pitching staff that I have this year. At least I have the depth with guys I can bring in and who can go three days in a row and not lose it a bit. These are the guys that I have.”

Miami (14-6) closed out its slate of district games with a perfect 10-0 mark, earning the top seed in the upcoming district playoff tournament. The defending 8A-14 champions have put themselves in great position to chase a repeat title and have proven they can beat every team in their district.

“What matters the most in our eyes is district games, because obviously the team with the best record in the district will get the first seed,” Stings catcher Oney Pino said. “So as long as we do well against district teams we will be set for the tournament. It may give us confidence, but we still cannot underestimate any of these teams. Any of these teams can beat us on any given day; it is baseball. Baseball is very unpredictable. So as long as we keep on fighting and keep playing how we are playing, we will be good.”

The Gladiators (9-11) have also performed well this season, but have been snake-bitten by costly mistakes that seem to derail their efforts. Gardens Manager Tino Burgos admits that the pitching has not quite been there for the team this season, and the club has a tendency to allow one or two bad innings that often prove too much to overcome.

“Our Achilles heel seems to be that one bad inning,” Burgos said. “The offense is trying to fight back, but when you are down a few runs early in the game it allows pitchers to open it up and throw certain pitches in situations that they may not throw in a tighter game. But I think the effort and the competitive spirit was there today, and they played hard. That is really all I can ask from my guys.” 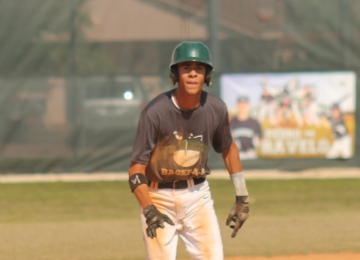 Argenis Hernandez helped spark the Stingarees’ big second inning with a leadoff walk. Christopher Rodriguez followed with a liner to center field that put runners on first and third, and Christian Torres delivered the dagger with a shot that split the right-center field gap for a double that plated both base runners.

As has been their style all year, once they cracked the scoreboard and got some base runners the Stings kept things going. Aparicio drew a walk, and Gustavo Miranda reached on a fielder’s choice off a sacrifice bunt that erased Torres at third base. Ray Blanco then delivered an infield single that allowed Aparicio to cross the plate, and Miranda also scored on an interference call.

“They are picking each other up. Every time somebody does something, the next guy picks him up and comes through,” Suarez said. “They are pushing for each other, and that is a good thing. It is all you can ask for. After that the chips drop where they will and that is how the game goes. It is just about trying to do what you can do, and after that everything will fall into place.”

With a nice lead, Miami relied on its pitching staff to make that advantage hold up. Hialeah Gardens answered back in the bottom of the third to score a run off of Escono, as Chris Clara came through with a clutch single through the left side to drive in Jorge Burgos. Burgos helped set the scoring opportunity up by drawing a walk and then swiping two bases to get within ninety feet of home plate.

Escono answered back with a strikeout to end that threat, and Aparicio avoided trouble by scattering a hit and three walks over his four scoreless innings. The Gladiators had one last chance in the bottom of the seventh after Pedro Ravelo and Burgos drew walks to start the inning, but Miami responded with a 5-3 double play and a strikeout to quell the threat and end the contest.

Pinch-hitter Ramon Garcia made a solid connection on the ball, but the Miami third baseman Chris Rodriguez did a nice job of knocking the hotshot down in front of him. Rodriguez alertly picked up the ball in his glove, stepped on third for the force out and then threw across the diamond to first baseman Argenis Hernandez to complete the big double play. It was a key moment at the end of a tight contest, and Rodriguez nearly found himself in position for a triple play in that moment. 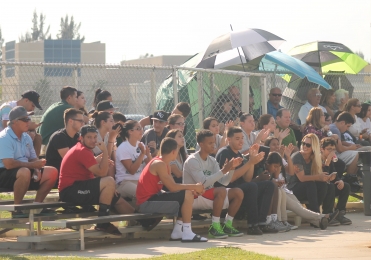 Loyal Hialeah Gardens fans cheered and chanted in unison to support the Gladiators in their Game of the Week showdown.

No one was more appreciative of the effort than the Stings closer, Aparicio.

“They have faith in me for putting me out there, and I thank my fielders because they help me out a lot,” Aparicio said. “I made some pitches and made some mistakes, but they helped me out a lot there. I wasn’t in synch and I wasn’t in a very good groove, but when it came to it, thank God, I made the right pitch. Pino called the right pitch, I executed perfectly, and it worked out well.”

While the final score did not favor the home team, it was a memorable day for the Gladiators program. Playing on a home field that was only unveiled a year ago, Hialeah Gardens enjoyed the chance to host a Game of the Week for the first time. The game attracted a nice large crowd of enthusiastic baseball fans, and even one loud clucking chicken out there enjoying the action. It was a beautiful day for baseball, and the two teams played a close and competitive contest that was well worth watching.

“It was a great experience to host a team like Miami High, a district rival and a great opponent, in the setting that we had,” Burgos said. “It was just great that the kids got to experience that on both sides. It is great exposure for the kids on both sides, and it is just a great atmosphere. I really appreciate High School Baseball Network for what it does for us, for the kids and just what it does for high school baseball in general. Hopefully this thing can just keep getting better and better.”