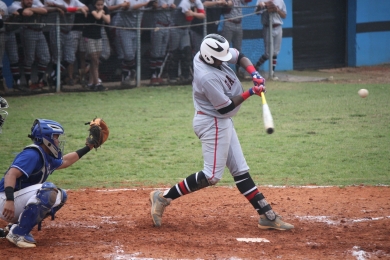 Elijah Eusebio went 2-for-4, with two RBIs in the first inning.

After a strong season by both sides only one team’s season would continue after Tuesday’s big showdown. The Braddock Bulldogs started off the season as hot as any team in Miami-Dade County and marched through the schedule with an undefeated record at home. The Coral Gables Cavaliers brushed off an up-and-down start to their season and finished off the year with a 12-game winning streak.

Now make it 13 straight wins for the Cavaliers.

Both teams have shown they belong in the 8A-15 final, but unfortunately there was only one spot up for grabs for the championship game. On a rain-soaked afternoon, Coral Gables senior Andrew Cabezas made sure it was his Cavaliers that were still standing afterwards. Cabezas threw six innings, striking out 10 and walking four to avenge his loss to the Bulldogs during the regular season at Marlins Park.

“We both split one to one in the series,” said Cabezas. “We knew we had to battle, and at the end of the day it was anybody’s ball game.”

Both teams were confident coming into this game against each other, and rightfully so. Each scored a total of nine runs in their two meetings this season, splitting the series with both games having a difference of no more than two runs.

“We felt good obviously,” said Bulldogs Manager Manny Fernandez. “We hadn’t lost at home all year. It’s been a place where we’ve made it tough for people. So in that aspect we figured they had gotten it out of their system, beating us the last game, since we beat them the first game.”

Cavaliers Manager Phillip Wisser knew plain and simple what his team needed to do this game to come out on top.

“Just attack,” said Wisser. “We’ve started to play really good ball lately; we came into the real with a lot of high expectations. I think we kind of pressed early on. We just came in with our mentality and said if we could play our game of baseball we’re going to come out on top.” 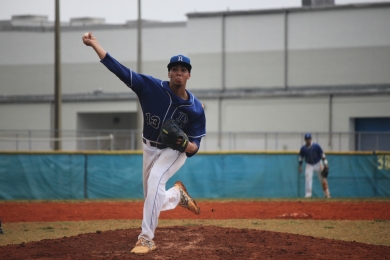 The Cavaliers did their damage early in the game, scoring two runs in the first inning and three in the second. They remained quiet until the seventh, where they scored one more. Elijah Eusebio started things off for tGables in the first inning with a two-run single with bases loaded.

“I was looking for something to hit,” said Eusebio. “I just wanted anything to put the ball in play and get the job done. Whether it was a ground ball or a fly ball, I was just trying to get the job done.”

The Cavaliers kept it going in the second with three two-out RBIs. Coco Montes singled and scored on a triple by Anthony Valdes. After a walk to Elih Marrero, Jordan Morina singled to score both Valdes and Marrero. In the seventh Morina hit a sac-fly to score Marrero, who reached on a triple.

Braddock junior Nelson Alvarez started the game at third, but once his name was called to get on the mound and pitch he responded. He struck out four hitters in four-plus innings, keeping his team in the game.

This loss brings an end to a Braddock season with high expectations, and to the high school careers of some of their talented players who spent their entire time at Braddock.

“Playing baseball in Miami-Dade County, you know how loyalty is a lost art in many cases,” said Fernandez. “We start with kids that are phenomenal players and then a year or two later they’re playing at other local schools. The first and foremost thing I said to them was, ‘Thank you for your loyalty, thank you for wearing the Braddock B with pride, thank you for wanting to be here and working hard for us’.”

For those seniors that are leaving, this game was like it would be for any 18-year-old playing his last game with his team. Saddening, nostalgic, and heartbreaking are just a few adjectives to describe what this loss feels like.

Not only do those seniors likely part ways with each other, but also they leave behind a team that was theirs in the hand of their younger teammates.

“Just keep your head up and regroup for next year,” said Bulldogs senior outfielder Willie Padron. “It’s not a sprint, it’s a marathon. Keep it going the whole year.”

While the Cavaliers clinched a regional tournament berth, that’s not enough for a team as hot as them.

“This has been a great win; we knew this was the big one,” said Wisser. “We’re ecstatic we have a chance to be in a regional game next week, but we want the next game. We want that title. We’ve been working our tails off all year long. This game is over as soon as we walk through that door, and we’ll work tomorrow to get ready for the next one.”

The Cavaliers will go on to face the Columbus Explorers in the 8A-15 final.