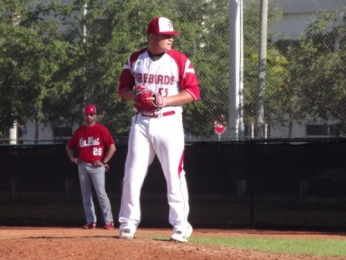 For the Key West Conchs to run into Cuba, typically they have to travel south from their island home at the nation’s southernmost point.

Doral Academy senior ace Christian Cuba delivered a stellar performance to spoil a rare road trip north Friday afternoon for the Key West baseball team. Cuba tossed a two-hitter over six innings and his offense supported him by collecting eight hits for a 9-1 victory over the Conchs. With much of the attention on Key West sophomore Greg Veliz matching pitches across the diamond, the Firebirds ace rose to the occasion to defend his home turf with a big showing.

“Cuba is one of the best pitchers in the county, make no mistake about it. He is lights out and has been all year,” said Doral Manager Ralph Suarez. “I’ll take our number one and number two over any team in the league.”

The Firebirds’ victory was even more impressive given the recent hitting being done by the Conchs offense leading up to Friday’s game. Key West had scored 53 runs in its last six games.

“That is a good team we just played out there,” Cuba said. “But our coaches prepare us for tough teams like this and we trust each other. I think that is why we are successful.”

Miguel Casanueva led a strong defensive showing from Doral (12-7-1). Casanueva recorded eight assists on the afternoon to go with his three walks and a run.

“We always know that our defense and pitching is going to be there, so we a fortunate in that aspect,” said Miguel Casanueva. “We have to put this win behind us and prepare ourselves for the next game.”

The Conchs (12-7) jumped out to an early 1-0 lead after Cuba retired the first two batters of the game on a strikeout and ground out. Then, Gregory Veliz launched a two-out double and scored on an RBI single by Andrew Freeman. That lone score was the only run of the game for the Conchs, as Cuba found his groove and carved up the Key West hitters the rest of the game. 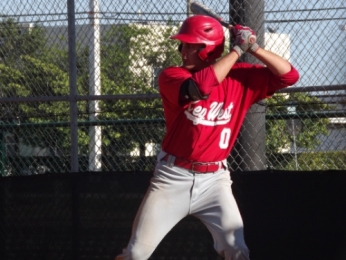 Key West stand out Greg Veliz before his double in the first inning.

It wasn’t long before the Firebirds got to Veliz. The bottom of the second inning the Firebirds batted around and tallied up three runs. An error that allowed freshmen Roberto Leiva to reach base safely got things started, setting the table for a grandiose inning from the Firebirds. With one out, senior Harold Alvarez singled and a walk to Andres Valbuena loaded the bases. Freshman Michael Marin then legged out an RBI infield single to get Doral on the scoreboard.

With the bases still loaded, Veliz struck out the next batter for out number two. Another two runs scored after Alvarez came home on an RBI walk to Carlos Pino. Louis Valbuena next roped a single, plating the third run of the inning and giving the Firebirds the 3-1 lead after two innings.

The Firebirds tacked on another run in the third when Casanueva walked and came in on an error. The third also saw a pitching change from Conchs Manager Ralph Henriquez. The skipper decided to bring in University of West Florida commit Andrew Freeman and move Veliz to shortstop.

“To be able to score three runs off of a pitcher as quality as Veliz is a credit to our coaching staff and players,” Suarez said. “We struggled earlier in the year with our bats but I have the best coaching staff in the county and we continue to work.”

In the fifth, Cuba found himself in his first bit of trouble since the first inning. After Cuba walked the first batter of the frame and an error put Conchs on first and second, Cuba was called for a balk which advanced both the runners into scoring position. In a mature manner, Cuba wandered to the back of the mound and took a deep breath before he toed the rubber again. The collection of thoughts and regrouping moment worked, as he got the next batter to fly out to center field and then recorded back-to-back strikeouts to end the threat.

“Cuba was lights out. Any time you can hold a team like that to one run you did a good job,” said Pitching Coach Armando Rodriguez. “Coach Suarez and I have a lot of years together and we have much respect for Ralph Henriquez and that program; he does a great job.”

The Firebirds half of the fourth included three more runs, as they continued to run away with the lead making it almost impossible for the Conchs to make a comeback. The inning got started with a walk to Luis Valbuena, followed by a RBI double that was almost turned into a triple but for a good throw from the shortstop to get Nelson Escribano at third. Leiva singled on the very next pitch, and then back-to-back walks loaded the bases for Andres Valbuena’s second RBI of the game on a line drive single.

Just as the Conchs were starting to show some life in the dugout, the Firebirds added two more runs in the bottom of the sixth and put an end to that. The inning started with another Nelson Montilla double and then back-to-back-to-back walks plated him. A sacrifice fly from Brandon Gonzalez drove in the ninth and final run for the Firebirds.

Royevan Armas came in to pitch the top of the seventh and went 1-2-3. All three outs went to the defensive stud at shortstop, Miguel Casanueva.