Explorers Rally Past Falcons For Trip To Title Game 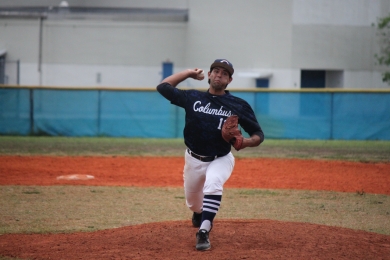 Chris Coipel throws in relief for the Explorers.

It takes a veteran team to keep things together when a game is not going their way. The Columbus Explorers found themselves behind against a Ferguson Falcons team that came out with very high energy from the onset of the game. The Falcons jumped ahead early and built a 6-2 lead before Explorers Manager Joe Weber regrouped his guys and they battled back.

The Explorers erupted for five runs in the fourth inning to take the lead, and never looked back. Columbus went on to claim a 12-6 victory in the 8A-15 district semifinal Tuesday at Coral Gables.

“We didn’t have some things go our way and that prolonged the inning,” said Weber. “After that inning I just got them together and I said, ‘You guys need to relax; you have been down before and you’re not going to get it back in one swing.”

Things got scary for Columbus in the fourth inning after the Falcons’ Alex Vazquez tripled to right-center field, clearing the bases. Vazquez slid head-first into third base colliding with third baseman Jackie Urbaez’s knee. After the collision both players laid on the field in pain. Vazquez was removed from the contest, but Urbaez refused to leave the game with so much at stake and he stayed in despite the knee pain.

“I wasn’t coming out,” said Urbaez. “I just wanted to play for my team, I couldn’t let them down this early in the playoffs. I’ve been with them the entire season; I’m not just going to leave them hanging like that. I’m going to keep fighting through my pain and just grind with my brothers.”

Urbaez did just that, finishing the day 2-for-2 with four RBIs and two walks.

“Just looking for a pitch to hit,” said Casals. “I put a good swing on it. We had to get something going there; we had a one-run lead and even with a one-run lead in this district it’s hard to come up with a win.”

Chris Coipel entered during the fourth inning in relief and did a fantasic job to keep his team in position to win the game. He threw three and-a-third innings, completely shutting out the Falcons by allowing no hits and striking out one.

Danny Bello hit a towering pinch-hit home run to right in the sixth inning to close out the scoring. 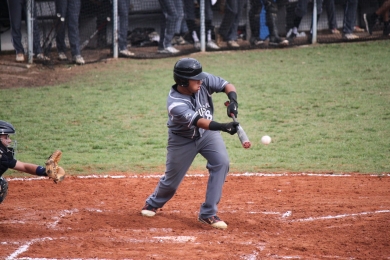 The Falcons came into the game as the fifth seed, then beat the Southwest Miami Eagles and played with the intensity needed to knock off the top-seeded Explorers. Vazquez led the Falcons offense with two hits and four RBIs before exiting the game due to the collision at third.

The fourth inning was a big frame for the Falcons. Brian Perez led off with a single followed by consecutive walks to Raul Delatorre and Kenneth Diaz. Christian Martinez produced the first run on an infield single, beating out a throw to first. Christian Abad put the ball in play and the Falcons capitalized on a fielding miscue to score another, before the big bases-clearing triple from Vazquez.

“We were just trying to scratch a run out,” said Falcons Manager Jose Novas. “We just tried to get an early lead, play small ball early and just let them feel some pressure to give ourselves the confidence that we could play with these guys.”

The Explorers’ bats were quick to respond, scoring 10 unanswered runs to finish off the game.

“It’s a shame because I thought they were gelling at the right time,” said Novas.”They had gone through a lot of adversity this year, and I thought we had a little bit more baseball left in us.”

As the season ends for the Falcons, the high school baseball career of eight seniors also comes to an end. Seniors Alex Medina and Sergio Ramos are two of those who will be hopefully playing somewhere else next year.

“It’s the last time I’m going to play with these guys and put on this jersey,” said Ramos. “These are the best four years I’ve had. I want to thank my coach; without him I would not be the player, the student or the son I am today.”

Medina echoed those sentiments, while appreciating the effort his team gave during the district playoffs.

“Even though we didn’t get the result we wanted, we put up a fight and we gave it our all and left it all on the field,” said Medina.

The Explorers will defend their 8A-15 title in a rematch of last years title game against the Coral Gables Cavaliers.