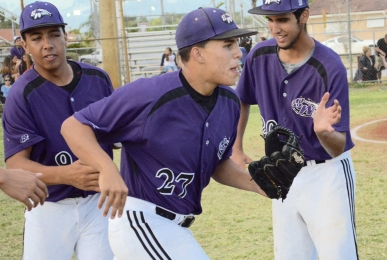 A pair of senior pitchers delivered strong outings Wednesday night, which is just what their coaches wanted to see as the district playoffs near.

Southwest Miami’s Andres Fletes outdueled Archbishop Carroll’s James Oporta in the Eagles’ 2-0 non-district win at Southwest Miami High School. Fletes’ 81-pitch, two-hit complete game gem topped Orpota’s three-hitter in a low-scoring game that has become the norm for Southwest. It was the eleventh time this season Southwest (8-13) has held an opponent to two or fewer runs. On the other hand, Southwest hasn’t generated a whole lot of offense.

“We’re playing really good defense and we’re pitching well; we have a hard time getting runs across for some reason,” said Southwest Manager Josy Torres. “It’s hard to put your finger on it, but we’ll keep working and hope we can break out when the right time comes.”

It was fitting on Southwest’s senior night that Fletes led the way. After being one of nine players from the class of 2015 honored before the game, Fletes allowed a leadoff single up the middle by Nick Labrada to start the game, and then retired the next 14 batters until Bryan Austin lofted a single to shallow center in the fifth.
Fletes, who entered the game with a 1.01 ERA, was in command all night. He fanned seven and walked none.

“Andres Fletes has been consistent for the last two years, so we know what we’re going to get from him,” Torres said. “He gives us a chance against pretty much anybody when he’s on the mound.”

Notching the victory on senior night was a bonus for Fletes, whose battery mate — senior Rey Pastrana — has been at the other end of his pitches since they were eighth-graders.

“I wouldn’t be the pitcher I am without him,” Fletes said. “He calls a great game. He’s helped me a lot.” 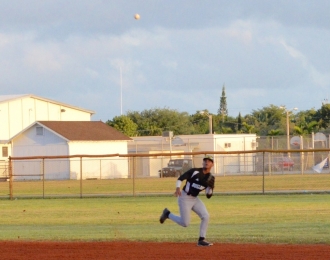 Southwest scored both its runs in the second inning. The spark came from the bottom of the order. Jason Grana, who reached base in all three of his at-bats, beat out a bunt. One out later, Anthony Piulats moved Grana to second with a single. After a balk, Grana scored on a wild pitch and Piulats came home on an errant throw to give Southwest a 2-0 lead.

Southwest had scoring chances in other innings, but Orpota escaped unscathed, including working out of a bases loaded, one-out jam in the fifth. Although he plunked five batters, Orpota walked just one, struck out four and allowed one earned run. He didn’t give up an extra base hit.

“He started the season on the disabled list,” said Carroll Manager Andy Blanco, whose team was 3-3 in its last six games, but slipped to 5-18 overall. “We babied him in a little bit throughout the season; now he’s catching on and he’s going to help us out in the district playoffs. That’s what we needed and he’s getting some confidence.”