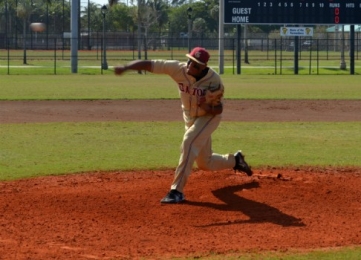 A year after falling behind and losing to Miami Springs by a run in the district final, Goleman wasn’t about to make the same mistake this time around.

Playoff games often are decided by which team makes the most of its opportunities. That certainly was the case Friday when the teams faced off for the 6A-15 championship at Florida Memorial University. Goleman rallied from a deficit to win 2-1 to claim the district crown. The win puts the Gators (21-3) as the host in the regional quarterfinal Wednesday, where they will host defending 6A state champion Mater Academy.

Miami Springs took a 1-0 lead in the first inning as Obel Vega came in when Victor Perez got caught in a rundown between first and second base. It was a strategic move by the Golden Hawks and one Manager Willie Vazquez said he likes to say for big games such as this one.

In the fourth inning, Brandon Paez smacked a base hit to bring in Erik Delgado for the tying run. Kevin Perez singled, and two batters later scored on an error for the go-ahead run that held up as the decisive run. Paez finished 2-for-3 as the only player with multiple hits.

Michael Pelaez pitched a complete game for the Gators, allowing three hits while striking out four and walking three. He struggled early, giving up the run in the first, but then he settled down.

Lopez said the Gators simply just found a way to win in a game that could have gone either way with both teams playing solid defense. Goleman just made the most of its few opportunities.

“My team defensively did a really good job,” Lopez said. “They didn’t give much, but what they did, we took advantage of. We found a way to score, which is what we do.”

Vasquez said the Golden Hawks made two costly mistakes and didn’t do enough to support the solid pitching it received.

“We had a tough outing,” Vasquez said. “We had great pitching. We just didn’t have the baseball. The pitching’s been there all year. We just haven’t been able to support on defense.”

Miami Springs will travel to Doral Academy for its regional quarterfinal Wednesday.