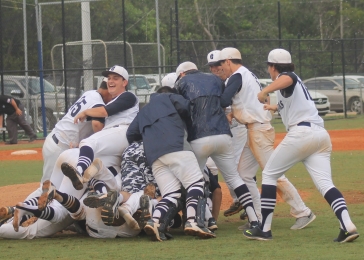 The Raiders celebrate in a dogpile after beating Key West to win the 4A-16 district championship on Friday.

Even on one of the hottest days of this year, Gulliver Prep still saw a drought come to an end. The Raiders had not won a district championship for the past few seasons, but on Friday afternoon all that changed. Facing rival Key West in the 4A-16 title game, the Raiders received a dominant performance from Evan Kravetz for a 3-0 victory.

“It feels great. We haven’t won districts in a couple of years, so just the fact to win it against a great team like Key West is incredible,” Gulliver Manager Javier Rodriguez said. “It was Evan Kravetz Day, The Hammering Hebrew. We played great defense today and we did all the little things right. Basically we made every play and we just didn’t give them a chance to get anything going today, due to Evan pitching so great and the great defense.”

The big southpaw Kravetz certainly did his part on the mound. The senior ace limited the Conchs to three hits and did not walk any hitters, while picking up three strikeouts. Like so many other veterans on the team, the chance to finally hoist a district championship trophy was something a long time coming.

“We went four years without one, and those were tough years,” Kravetz said of the title. “They were really tough games. But even with this championship it is not over. We still have five games to win to win states, and they are win-or-go-home. We have our backs against the wall again, and we have a job to do. We have to keep going at it and get this job done.”

Perhaps the largest reward of all comes in the fact that the Raiders (20-6) will host the opening round of the regional playoffs. Gulliver will welcome 4A-15 runners-up Mater Lakes in a regional quarterfinal on Wednesday afternoon. Key West also advances to the regional playoffs, where it will travel to face St. Brendan.

“This game is one of those games that it doesn’t really matter, but it does,” Rodriguez said. “You want to win the game and host. I know there are two good teams battling in the north district, and Key West is going to play one of them at their place and one of them is going to come to us.”

For the Conchs (18-8), the day first began with a district semifinal against a gritty Keys Gate Charter squad. Key West battled against the Knights and ace pitcher William Sanchez, before taking the lead for good when Anthony Henriquez blooped a single into shallow left field for a pair of RBIs. The Conchs opened things up from there to run away with the 13-4 victory that clinched a regional berth and put them into the title game against Gulliver.

The game did have its consequences, however. Due to the uncooperative weather this week, the winner of Friday morning’s semifinal immediately turned around to play in the title game. On such a hot and humid afternoon, Conchs Manager Ralph Henriquez knew the team was physically exhausted heading into such a big contest against a fresh and dangerous rival. 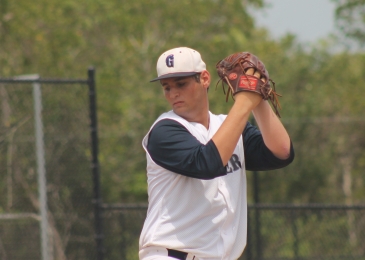 “The first game we really had to dig deep,” Henriquez said. “Willie Sanchez did a great job and for the first six innings it was a dogfight and back and forth. Keys Gate played a great game and they swung the bats, and that kid is a very good pitcher and he mixes his pitches well. It took a lot out of us to win that ball game, and the score was nowhere near indicative of it. We had a lot of kids cramping up and coming out of the game in those conditions, and I didn’t even know what my lineup was going to be 40 minutes later to play against a team like Gulliver. I’m not using that as an excuse; they beat us three nothing today. But it was just tough playing a double-header.”

Off the field, Key West had endured even more. The tragic passing of 14-year old Jonathan Wells this week has affected the entire island community. The son of one of the team’s assistant coaches was a future Conch player, a well-known fixture in the community and a special person.

“We’ve had a tough week this week with two funerals and the passing of Jonathan, and we need to take a couple of days and slow everything down,” Coach Henriquez said. “We have to get back to Key West now for a funeral tomorrow at ten in the morning. So it is tough. Some of these kids were tired, and I do not want to take anything away from Gulliver. It is just hard under these conditions to play the type of baseball you need in order to beat Gulliver. But their guy did a good job of pitching and they swung the bats. It was a good ball game.”

The way Kravetz was throwing on Friday made it tough for any team to have much chance. The left-hander threw 49 of his 72 pitches for strikes, and he had his curveball working well from the beginning. This opened things up to allow him to throw whatever he needed in any count, while keeping the Conchs’ offense out of synch.

“I had it working in the pen, and it is all credit to our Pitching Coach, Joey Martinez,” Kravetz said of his curveball. “Early in the game he told me I would have to use it to keep them off-balance, because they are a great hitting team. I had to use it very early, and it just worked out. I was able to spot it up, but I also could not have done it without the defense behind me. They were unbelievable.”

That Raiders defense made several big plays. The biggest moments came during the second inning, after Brandon Presley led off with a double deep to center field. The next batter attempted to lay down a sacrifice bunt, but the ball was fouled off a few feet in the air trailing away from the plate. Gulliver catcher Pedro Pages made an amazing lunge from a crouched position and stuck his glove out to snare the ball and record a big out.

Conchs’ catcher Patrick Edwards followed with a single to center field, and Presley was waved around third to try and score. But Raiders center fielder Brian Nido fired a bullet to Pages at the plate in time to make the tag and keep Key West off the scoreboard. A pop up to Kravetz ended the inning, and the southpaw allowed just one base runner over the final four innings.

“The second inning had me nervous, but they made unbelievable plays,” Kravetz said. “After that I kind of knew we were going to have a good game today. The fact that they were able to pick me up like that and get some runs on the board meant I didn’t have to worry after that.” 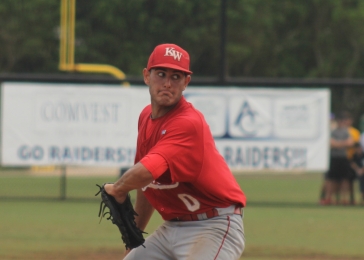 Greg Veliz struck out four in five innings for the Conchs.

Gulliver carried that momentum to the plate in the bottom of the fourth to score all the runs it would ultimately need. Gio Soto led off with a walk, and then stole second base to get into scoring position. Pages followed with a double to put two runners into scoring position, before giving way to courtesy-runner Chris Lorenzo. Alex Erro got the scoring started with a ground out that plated Soto, and Lorenzo later scored on an error.

Soto added a valuable insurance run in the sixth, after lining a single up the middle to lead off. Pages reached on an error and Nido followed with an RBI double to center.

The Gulliver coaches had let Kravetz know beforehand that it was his game, and that he would have every opportunity to pitch the full seven innings. Although the coaches joked with him that he was being pulled after he needed just six pitches to get through the sixth inning, there was never any doubt that he would go the distance.

“They have all the confidence in the world, and they do it by if you are throwing well you are staying in there,” Kravetz said. “There is no need to take you out as long the pitch count is low. I knew they always had the confidence in me and I have had a great year. They told me I was going seven, and after the sixth inning they told me, ‘This is yours’, and it worked out.”

While everything may not have worked according to desire for the Conchs, they also still have the chance to bounce back and make a run for a state title this season.

“We’re still in the playoffs and that’s important,” Coach Henriquez said. “We’ll take a day or two to recover. God-willing, we’ll recover. It has been a very tough week with the loss of Jonathan and everybody has had to deal with that. We just need to let time heal everything and have a couple of days off for these kids to recover. But we will go back to practice on Monday, and on Wednesday we will be there.”