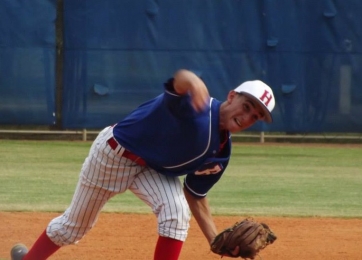 Hialeah came into the 8A-14 district playoffs looking to get back to the regional playoffs after missing the playoffs last year.

On paper the match up was going to be a tough task for the Thoroughbreds, as all playoff games should be. The Thoroughbreds beat the Gladiators 6-4 in an entertaining ballgame at Flamingo Park that was filled with tension, energy and passion and kept everyone in attendance nervously ready to jump on the field throughout.

The win puts the club into Wednesday’s district championship against Miami High, after the Stingarees beat Miami Beach for a chance to defend last year’s district crown. Miami won both meetings in a pair of close contests this season.

Hialeah Manager Ozzie Borrell couldn’t help but be excited for his team and coaches, considering he inherited a five-win team from the year before.

“It was really good. We put so much work in over the course of the year to get where we are today,” said Borrell. “There really isn’t anybody else to give credit to besides our players and our coaches. We all worked so hard for this, and we’re not done. We’ve gone through a tremendous deal of adversity amongst our team. Today felt fun for us, and we looked like we were having fun playing out there today.”

It took a big first inning and a great pitching performance from Thoroughbred starter Anselmo Suarez. The right-hander threw four innings of no-hit baseball, before giving up the first hit of the game and the first run in the same inning.

The Thoroughbreds (11-12-1) struck first. In their half of the first inning a three-RBI double was the cause of a four-run first inning and set the table for the rest of the day. 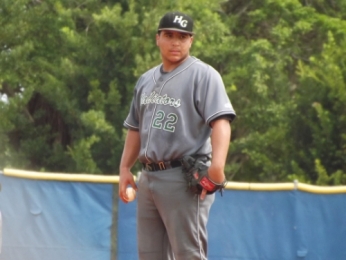 Alex Garcia pitches against Hialeah on Monday afternoon in the 8A-14 playoffs.

It was not until the top of the fourth inning when the Gladiators finally broke through. Senior Jose Gaston smacked a single up the middle to spark his guys to get back into the game. After Gaston singled, the following batter walked and set up an RBI opportunity for sophomore outfielder Alex De La Torre, who did not disappoint. De La Torre delivered an RBI double, knocking in Gaston and putting the Gladiators on the board heading into the bottom of the fourth inning.

The bottom of the fourth was silent for the Thoroughbreds as new pitcher Chris Clara didn’t allow any hits, runs or errors.

In the top half of the fifth inning the Gladiators put up two more runs, cutting the lead to two runs. An error in the outfield allowed Clara to reach base safely and then an RBI triple from sophomore Nathan Llanes made the score 5-2 with one out and freshman Mike Ramirez due up next. Ramirez swung and delivered a sharply hit ball to the second baseman, who opted for the out at first allowing Llanes to score.

After the Thoroughbreds tacked on an insurance run in the bottom of the fifth on an RBI single off the bat of Carlos Reyes, they opted to bring in sophomore Andres Rodriguez after Suarez let up a double with one out in the top of the sixth. Rodriguez came in and let up two back-to-back hits which resulted in junior Arthur Cordovez making the score 6-4.

A 1-2-3 bottom of the sixth, followed by a two strikeout top of the seventh would be all for the game.