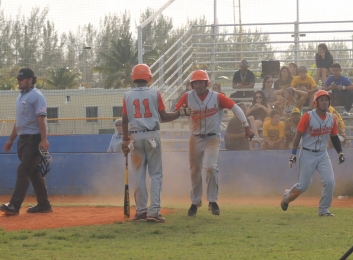 The Broncos celebrate after scoring the go-ahead runs in the top of the seventh inning.

It was a huge moment in the game that nearly never had the chance to even happen. Homestead leadoff hitter Mark Nichols had left the game to get medical attention on his hand, after he suffered a laceration during a scoring play in the sixth inning. But with the game tied and a pair of runners on base in the top of the seventh, Nicholas returned to the lineup with a heavily bandaged hand that fortunately did not prevent him from swinging the bat.

The senior delivered with the biggest hit of the day, driving a 1-0 offering deep into the right field corner for a two-RBI triple that put the Broncos back in front for good. Homestead opened the floodgates to score four runs in the seventh, and then held on for a 6-3 victory over local rival Keys Gate Charter.

On a beautiful day for baseball at the Homestead Sports Complex, the two clubs rewarded the many fans in attendance with an exciting and action-packed performance. After the Knights rallied for a pair of runs in the bottom of the sixth to even things up at 2-2, the visiting Broncos responded with a two-out rally in the seventh. Alexis Yepez walked and Francisco Diaz reached on an infield single to bring Nichols to the plate for his big moment.

“It was nothing; it was just a little cut with a lot of blood,” Nichols admitted about his injury. “I was able to get back in, and I have got to be here for my team. I love the game so I came back in and did what I was able to do. It is great and the whole team gets fired up. That is what the rivalry is about. I got it started and everybody starting hitting the ball around, and that was how we got the ‘W’ today.”

Phillip Gil reached on an error to keep things going, as Nichols easily scored on the play to extend the lead. Catcher David Munoz then singled and gave way to courtesy-runner Steven Gutierrez, and Emmanuel Zarzabal came through with an RBI single to plate Gil. David Villafane completed the scoring by shooting an RBI single that drove in Gutierrez.

“The kids never quit. That’s why I coach and that is what it is all about,” said Homestead Manager Bruce Berman. “We are not having the best of years, but we hang in there. The last time we played them we tied 7-7 and it got dark and we didn’t get to finish. With them being within two miles of us it is a cross-town rivalry and the kids know each other. The kids didn’t quit, they battled and it was a great win.” 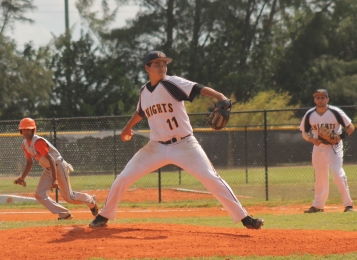 Zarzabal picked up the win with an impressive performance on the mound. The right-hander took a no-hitter into the fourth, before Knights left fielder Osmany Haya sent a slow roller up the middle for a base hit. Munoz erased that threat with a strong throw to catch Haya attempting to steal second to keep the Broncos (7-10-1) in front on a 1-0 lead they gained when Gil singled and scored in third.

The Knights (6-16-1) attempted a rally of their own with their final swings. Andy Agudelo reached on error leading off, but was erased on a fielder’s choice that put Chris Rodriguez on first. Homestead went to the pen to Jan Mattei for the final two outs, and the left-hander got a strikeout to the first batter he faced to turn the lineup over. Brandon Espinal singled to bring in Rodriguez, but was then thrown out on the bases for the final out of the contest.

Zarzabal earned the win to improve to 2-4 on the season. He allowed two earned runs on three hits and four walks, while recording five strikeouts.

“Big E, he really shut it down today,” said Nichols. “He threw very well, and I really wanted him to stay in for the whole thing. But our man Jan came in and he shut it down also. The most important thing at the end of the day is the ‘W’.”

While the Knights also know winning is most important, the club can take away a lot of important experience for several guys recently thrust into new roles on the squad. Keys Gate is less then two weeks away from competing in a tough district tournament, where the team is the second seed and home squad against a dangerous Key West team.

“We’ve done a good job at handling loss, and we haven’t really had a lot of down moments this season,” Knights Assistant Coach Richard Benavides said. “We had a lot of guys go down with injuries and grades, and this isn’t even our lineup today that we started out the season with. But the guys are being put into situations and a lot is being asked of them, and they are making mistakes.”

Keys Gate had four errors on the day as it adjusts to a new defensive alignment. The team also played aggressive and confident baseball, which can give the coaching staff more confidence that they will be able to fine-tune things in order to shore it up when it matters most at the end of the season. 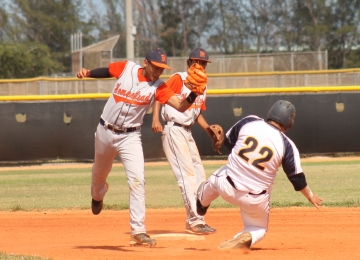 “All we can do is get ourselves ready,” Coach Benavides said. “We have a week and-a-half for districts, and we have to make sure everybody knows their defensive assignments, the signs and the base running, and how to make routine plays. If we make routine plays today, and in most games, we win.”

Despite trailing most of the way, there was no panic in the Knights dugout. The third time through the lineup the team struck for a pair of runs that evened the score. Espinal got things going with a great at bat in the leadoff spot, running the count full and fouling off some pitches before working a walk. Third baseman Omar Baldo smacked a single into center field, and gave way to pinch-runner Robert Esposito. Alan Quezada then plated both base runners with a base hit up the middle.