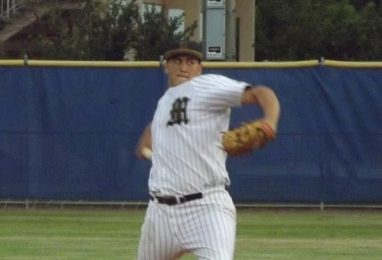 Edgar Aparicio went the distance to lead the Stingarees to the win.

Behind an early lead a strong pitching performance from Edgar Aparicio, Miami High finds itself back in the 8A-14 championship following a 11-1 win over Miami Beach. The Stingarees (16-8) jumped out with four runs in the bottom of the first inning of the district semifinal at Flamingo Park in Miami Beach, and they never looked back.

Miami will face Hialeah in the championship on Wednesday night, after the Thoroughbreds edged Hialeah Gardens to also advance.

The top of the order went right to work for Miami, as Ray Blanco walked and Victor Herrera followed with a double to left field to get his club on the board. Oney Pino was hit by a pitch, and Argenis Hernandez came through with a double to center field that scored both base runners. Dayron Mallea singled to also drive Argenis home.

The lead was all that starter Edgar Aparicio needed. The senior went the distance on 64 pitches, striking out eight without allowing any walks. The right-hander allowed just one hit, a solo home run from Hi-Tides senior Themi Pineda in the top of the second inning.

Miami Beach (8-14) had only one other base runner, when Armando Garcia was hit by a pitch.

Miami put things away with five runs in the second by again getting things going at the top of the order. Blanco singled to center and Victor was hit by a pitch, prompting Miami Beach to intentionally walk Argenis to set up for the double play. Instead, Chris Rodriguez made them pay with a single to right that drove in a pair. Argenis followed them home on a wild pitch, and Christian Torres added an RBI single to score Chris Rodriguez. Gus Miranda then drove in Torres to increase the lead to 9-1.

Pino added a solo home run in the fourth, and Chris Rodriguez had an RBI double that scored Argenis to close things out. Argenis was 2-for-2 with two doubles and two RBI’s, while Chris Rodriguez went 2-for-3 with three RBIs.