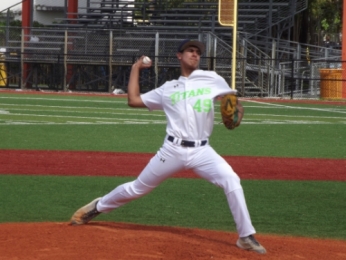 The Slam Academy Titans improved their standing in District 3A-15 on Tuesday afternoon by hosting the Dade Christian Crusaders and edging the Crusaders by a score of 11-8. The win puts them in first place in the district, with a match-up against second place Hialeah Educational Academy later this week to ultimately determine the district’s top seed.

The victory marks the sixth straight win for Manager Alfonso Otero and the 16-6 Titans. Even with the team’s recent success, Otero will continue to take it each out one at a time, and also each game one at a time.

“High School baseball is a game of twenty-one outs. We make sure to play all twenty-one and never take a pitch off,” said Manager Alfonso Otero. “Dade Christian is a team that just beat Hialeah Educational Academy, so we can’t take any pitch or at bat off.”

SLAM (16-6, 9-2) faced junior pitcher Phillip Edwards on Tuesday. It didn’t take long for the Titans to figure Edwards out, as they plated two runs in the bottom of the first inning. The Titans offense was led by sophomores Jeter Downs and Jose Garcia, who both saw much success in Tuesday’s contest. Downs went 2-for-3 with two extra base hits and three RBIs and Garcia went 2-for-4 with a double and three RBIs.

“Jose Garcia has been our RBI leader all year,” said Otero. “He is among the RBI leaders in the county and that is nothing new for him. We expect that from him now. Jeter is just on fire. Our team wouldn’t be where it is at this point in the season without him. The same goes for Garcia. Those two guys are just great players.”

Doing the pitching for the Titans was senior Jon Fernandez. The righty didn’t give up any hits in four innings of work, while only allowing one run and two walks and also striking out eight Crusader batters. In Fernandez’s last inning, he retired the Crusaders’ hitters in order all via strikeouts.

The only run that Fernandez allowed came in the top of the second inning thanks to a 6-3 ground out that plated Paul Macintosh. Macintosh had led off the inning with a walk and advanced to second on a stolen base and then to third on an infield error.

The Titans answered back in the bottom of the second with two more runs, on a walk, a hit by pitch and a double for Downs. The double was smoked down the left field line for Downs’ first two RBIs of the game, driving in Kevin Garcia and Brian Vargas, who both reached base via walks.

“All I was trying to do in my at bats today is what I do every other time I get into the box; hit the ball up the middle and make solid contact,” said Downs. 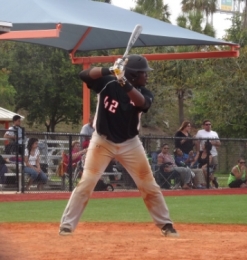 The Titans tacked on three more runs in the bottom of third inning. Andres Santana delivered an RBI double and Chauncey Nunez an RBI single, making the score 7-1 after three frames.

The bottom of the fourth inning was yet another three-run inning that was partly due to an RBI triple off the bat of Jose Garcia that plated Brian Frias. The next two runs were thanks to an RBI groundout that knocked in Garcia, and then a single from Kevin Garcia that drove in Andres Santana.

The Crusaders got on the scoreboard in the fifth inning after Fernandez was lifted for a reliever. The first batter that would step up for the Crusaders reached safely thanks to a botched fly ball in the outfield. He would later advance to second on a single off the bat of Edwards, and again on another single off the bat of Garrett Sheffield. With the bases loaded a snap-throw down to third sailed into the outfield, allowing the Crusaders to cross the plate for their second run of the game.

The Titans refused to lose the inning and answered back with a run of their own. After a leadoff walk to Brian Fargas, Downs crushed a triple to knock him in and further extend the lead.

The sixth and seventh innings revealed that the Crusaders (5-12, 4-8) don’t roll over and quit at all, even despite being down by nine runs with six outs left in the game. In the sixth inning the Crusaders scored two runs, and then scored four runs in the top of the seventh, giving everyone on the Titans sideline a scare. Ultimately, the Crusaders did not have enough magic to come back from such a large deficit though.

The next time the Crusaders will play is Thursday against the Doral Academy Firebirds. The Titans have a non-district game against the Mater Academy Lions on Wednesday at Westland Gardens Park.