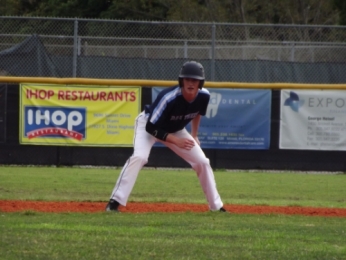 Palmetto Panther baserunner looks to steal during a 1-1 tie in the fifth inning.

Behind an early lead and a strong pitching performance from senior Brent Teller, the Palmetto Panthers find themselves back in the 8A-16 championship against the South Dade Bucaneers. The Panthers downed Varela 3-1 in the district semifinal at Coral Reef Senior High. Palmetto (15-8) will face South Dade in the championship on Thursday, after the Bucaneers held off Killian to also reach the district final.

With two outs and a tie ball game in the bottom of the sixth inning, the Palmetto Panthers rallied behind each other and had a magical string of events go in their favor. After back-to-back singles from Michael Roman and Kyle Toister got two runners on base, Carter Nash again delivered, this time in the form of an RBI single that knocked in Roman to put Palmetto back in front. After Toister advanced to third on the single, an infield error allowed him to score from third base and gave the Panthers a 3-1 lead heading into the top of the seventh.

Wednesday’s ballgame featured a pair of aces in Teller and Felix Varela’s Chris “Spanky” Gomez. The two pitchers attempted to outduel each other into the fifth inning, before being lifted for a reliever in hopes of finding that winning combination.

“Brent has carried us all year, along with Felix Garcia,” said Palmetto Manager Danny Smith. “For it to be a one-run ball game in the fifth inning in high school baseball, is extremely respectful.”

The top of the order went right to work for the Panthers in the first, as leadoff batter Carter Nash got on base thanks to a catchers interference ruling. Nash advanced to second on an infield error and was then driven in for the ballgames first run of the night on a RBI single off the bat of senior Kevin Barbato.

After two scoreless innings, it wasn’t until the top of the fourth inning that the Vipers plated their first run of the game. 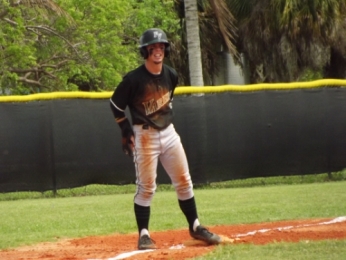 Palmetto Panthers and the Felix Varela Vipers played in the 8A-16 semifinal on Wednesday afternoon.

The Vipers got the top of the fourth inning started with a JC Garcia single, which enabled him to get on base and advance to second on a ball that got past the catcher. After an errant throw sailed into centerfield, Garcia advanced to third, placing him ninety feet away from knotting the game up at one. After an intentional walk to Hector Vazquez loaded the bases, an RBI walk to Oscar Gomez would be enough to tie the game.

A 3-1 lead in most cases is simply not enough, especially in high school baseball. This afternoon, it was all that was needed as reliever Felix Garcia was in full control of the offspeed stuff he possesses. Felix came into the game and chucked an inning and-a-third, allowed one hit, walked one and struck out one.

“I’ve been around baseball for a long time and I know a few things, one of them is that the team we just played is a good team,” said Smith. “Spanky is a great player and person and it starts with his coaches; those guys are class acts.”

The Palmetto Panther offense was led by Carter Nash, who was 3-4 with a run scored and an RBI.