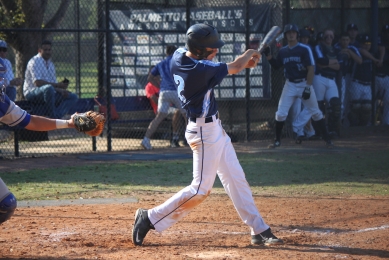 Toister knocks in two of three runs on the day with a single.

It was a win that Palmetto needed. Getting back into action after Spring Break, the host Panthers downed visiting Braddock 9-2 Tuesday at Coral Reef Park.

The showdown between two of the county’s top clubs came with each at different points in their seasons despite holding nearly identical records. The District 8A-15 leading Bulldogs visited the Panthers looking for a 12th win in 13 games, while the Panthers looked to stop a five-game skid.

“Me personally, I was a nervous wreck; I haven’t slept in days,” said Panthers Manager Danny Smith of the recent struggles. “You got a baseball team that started off so hot and then we got into this. I guess you could call it a ‘one-car crash’; we struggled last week.”

For many, Spring Break is a time to relax and go on vacations. But in baseball there aren’t such things as breaks during the season. Both Braddock and Palmetto were busy during the break, as the Panthers played in the Central Florida Spring Break SLAM and the Bulldogs in the HSBN March Madness Shootout. Both teams had different results. The Panthers returned to Miami with a 0-4 record, while the Bulldogs finished the week at 3-1.

“These spring tournaments have a way of making or breaking you,” said Bulldogs Manager Manny Fernandez.

Now in the final stretch of the season both team just have one common goal: finish strong. For a team that started off as hot as the Panthers (11-7), it was bound to turn for the better for them. A good practice before a couple good match-ups was all they needed to regroup.

“We changed a few things,” said Smith. “I think what happened to us today is going to get us out of that little slump that we’ve been in because our approach was much more mature.”

Smith isn’t the only manager worried about a hot start affecting his team in the long run. Fernandez is also seeing his team slow down in the past few games. 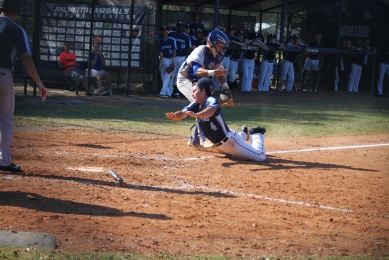 Evan Valverde tags out a runner on throw from right-fielder Joseph Lorie.

“We seem to be a little lethargic and a little lackadaisical the last two or three ball games,” said Fernandez. “I guess getting that emotional start winning nine or ten games in a row and winning that first game in the tournament against Pace, it was very emotional. I think it strained us a little bit.”

Smith called on senior right-hander Felix Garcia against the Bulldogs Miguel Velazquez in what seemed to be a pitching duel. Garcia went three innings, allowing an unearned run and a hit in the first, but nothing after that. Garcia’s game plan was simple Tuesday.

“Just go out and win and have fun,” said Garcia.

Velazquez was able to pitch around some fielding mistakes and hold the Panthers to an unearned run in three innings. Then the Panthers erupted.

The fourth inning was the turning point of the day for the Panthers. It started with four straight singles by Nick Vizcaino, Brandon Brookings, Kyle Toister and Carter Nash, including a two-RBI single by Toister to open the scoring. After two hit batsmen. another RBI single by catcher Carl Heldt followed.

The Bulldogs tried chipping away at the lead with a run in the sixth after an RBI single that scored Jean Martinez. The inning was brought to and end on a diving play on a line drive at shortstop by Carter Nash. 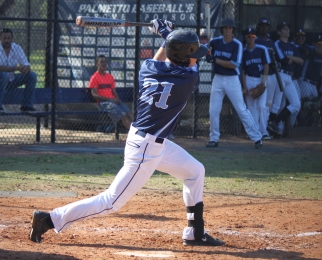 A quiet fifth was followed by another torrid sixth, with back-to-back mammoth doubles by Heldt and Kevin Barbato, who drove in Heldt. Toister added another RBI to his stat sheet with an RBI double to right.

“I had two strikes on me. I shortened my approach just trying to hit the ball the other way and bring in a run or two,” said Toister on his approach.

Nash gave the final blow with a single, knocking in Toister while capping off another four-run inning.

Both the Bulldogs and the Panthers head into a couple crucial district match-ups before the playoffs. Both coaches have a similar mentality going forward as they preached the same philosophy: game by game, inning by inning, pitch by pitch.