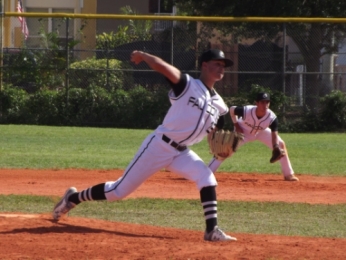 Sergio Ramos allowed one hit in seven innings in route to a 2-0 victory over the South Miami Cobras.

On a day that was dedicated to the seniors of Ferguson, and the High School Baseball Network Miami-Dade Game of the Week, it was Falcons senior starting pitcher Sergio Ramos that shined in a 2-0 win over the visiting South Miami Cobras.

The senior righty threw seven innings of one-hit ball while allowing just three walks and striking out five Cobra batters. The lone hit surrendered did not happen until the sixth inning.

“Sergio has always done this, as far back as I’ve been here,” said Ferguson Falcons Manager Jose Novas. “Our ballpark plays big and we know if Sergio is pitching we don’t need very many runs. He can keep us in any ball game he pitches.”

Ramos was literally on cruise control from the first pitch on. Ramos faced the minimum number of Cobras hitters in five of the seven innings he threw and in the two other innings he faced just four Cobras batters. Ramos used a one-two combo of fastball, curveball that kept the Cobras offense off balance all afternoon.

“I told my teammates before the game started, get me one run,” said Ramos. “It just so happened to work out perfectly for us today. We’re already looking ahead to Southwest.”

Heading into the bottom half of the fourth inning, Manager Jose Novas brought his team into a huddle and told them to settle down, see some some pitches and get their timing down in order to produce more quality at bats. Alex Medina worked a walk to get the inning started for the Falcons. After Medina was caught stealing, Daniel Esquivel reached base via an infield single and Brian Perez followed with a walk to place runners at first and second for Raul Delatorre. The sophomore delivered with a double that knocked in two runs and gave the Falcons a 2-0 lead that went on to stand up the rest of the way. 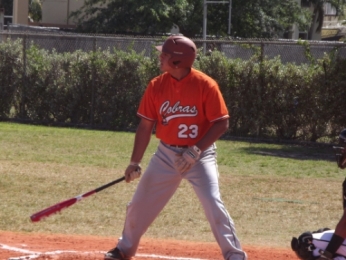 Emilio Borges gets ready to face a Ramos offering in the 4th inning.

Ramos cruised through the top of the fifth inning, retiring the side in order. The top of the sixth proved to be the only hiccup in his outing as he retired the first two Cobra batters in order but gave up a single to Ernesto Ruiz, which ended the no-hit campaign Ramos had been working on. After the single, a sacrifice bunt from freshmen Daniel Irissari advanced Ruiz to second for senior Julian Gonzalez. The RBI opportunity was squandered by a web-gem type play by first baseman Perry Wilson.

“I just felt really good out there today, I was able to get my early stuff over for strikes, which made it easier for me to throw my off speed pitches,” said Ramos.

The South Miami Cobras finished the year with a 6-16 overall record and a 3-9 mark in district play. The Ferguson Falcons improve to 8-14 overall and a 3-9 district mark. The Falcons move on to play Southwest Miami in the first round of the district tournament.

“Hopefully this win helps us mentally and physically,” said Novas. “We already dropped two games to Southwest. They are a good team. Hopefully this time around is different.”