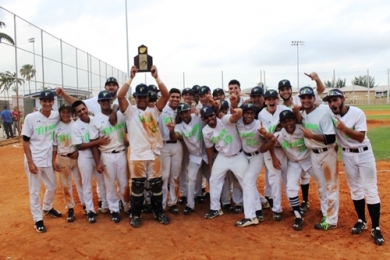 The SLAM Titans have made quite an impression on South Florida in their first year of district play. The Titans, after starting 0-2, have been one of the most consistent teams in the area over the season’s final two months. On Friday afternoon, they punctuated the magical year with a their first-ever district championship, defeating Hialeah Educational Academy 8-1 in the 3A-14 title game at Hialeah’s Slade Park.

“This all started with the administration and the vision they had for this school,” said SLAM Manager Alfonso Otero. “They had a plan, and to be able to come in here and win the district title in their first year of eligibility is something that is really special. This is a young team with only three seniors, but they worked hard, and they are getting better every day.”

The Titans and Bulldogs had split their two previous games this year, with SLAM winning the latest contest just a week and a half ago. In that game, Chauncey Nunez got the start, and was not as sharp as he wanted to be. On Friday, Otero again gave Nunez the ball, and this time, he had all the answers against a Hialeah Academy team that has been at the top of the district all year. 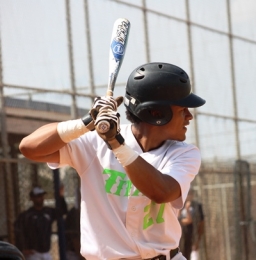 Jose Garcia was an offensive star for the Titans.

Back-to-back hit-by-pitches put Jeter Downs and Brian Frias on base. Jose Garcia, one of the leading hitters in Miami in 2015, then delivered a two-run single, but was thrown out trying to stretch it to a double.

Andres Santana picked right back up where the offense left off, singling and scoring on a Adrian Del Castillo double. Consecutive walks and a throwing error brought in three more runs, and suddenly SLAM led 6-1 after one inning.

“Obviously those six runs changed the way the rest of the game was played,” said Otero. “They are a good team we played, but it is hard for any team to give up six runs and not get a bit deflated.”

After a few scoreless innings, the Titans put the game away in the fourth. Frias walked, stole second, and scored on a Garcia single. A bases loaded walk to Kevin Garcia then plated the eighth Titan run.

Despite going 3-for-4 and driving in three runs, Jose Garcia was quick to point out his teammates after the game.

“We are young, we only have three seniors, and a couple juniors, and the rest of us are sophomores and freshman,” said Garcia. “This was a team win, everybody doing their job. I just feel blessed with not only my season, but us as a team. We have come a long way, and we are blessed to be able to continue to play into the regionals.

One of those freshman that contributed Friday was Juan Osorio. The southpaw relieved Nunez after four and-a-third innings, and threw the final two and two-third innings to secure the district title. Osorio did not allow a hit and struck out five.

“Juan is an example of the youth on this team,” said Otero. “This is a freshman, pitching in the biggest game of his life, and he didn’t even feel the pressure.” 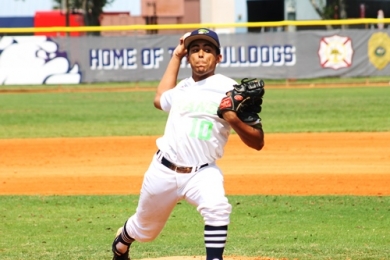 That lack of pressure is how the Titans have played since winning the HSBN March Madness Shootout Black Bracket championship last month, and could be a reason for a long run through these playoffs.

In the top of the seventh, with two outs, SLAM Pitching Coach Al Lopez had to urge his young team to prepare for the dogpile that was soon to come.

“I don’t even think they realized the magnitude of what they have just done,” said Otero. “The first district title for the school is something nobody will ever be able to take away from these kids.”

Up next for SLAM will be a home game next Thursday against Palmer Trinity. Hialeah Educational will travel to face perennial state power Westminster Christian.