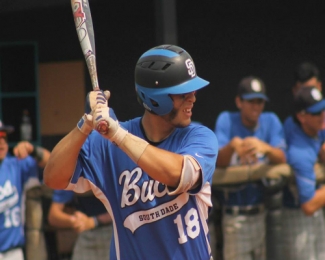 Gabriel Cruz went 3-for-4 with four RBIs and drove in the winning runs Thursday to lift South Dade to the 8A-16 title.

South Dade rallied for two runs in the top of the eighth inning and then held off Palmetto in a slugfest to win 11-9 on Thursday for the 8A-16 championship, helping the Buccanneers continue their quest to defend the Class 8A state title.

Gabriel Cruz singled to drive in Wesley Dacosta and Sergio Lopez for the decisive runs in the eighth. Cruz finished 3-for-4 with four RBIs.

The teams combined for 24 hits, including seven extra-base hits.

Palmetto scored twice in the bottom of the seventh to tie it at 9 and force extras. Nicholas Vizcaino hit a two-run home run, scoring Erik Largo.

The Bucs went up 9-7 in the top of the seventh as Cruz singled in Willy Escala, and Alek Manoah homered to also score Escala, who came in as courtesy runner for Cruz.

South Dade used a pair of three-run innings in the third and fourth to build a 6-0 advantage. Danny Vaughan doubled in Jhan Barrios and Escala before Cruz hit a sacrifice fly to score Sergio Lopez in the third. Lopez finished 2-for-4 with a home run, two RBIs and three runs. An inning later, the Bucs produced three more runs as Brandyn Thomas scored on a passed ball and Lopez homered, also scoring Jadan Garcia.

Palmetto got on the board in the bottom of the fourth. Kevin Barbato doubled and scored on Largo’s single to right field.

The Panthers turned the tables with a pair of three-run innings of their own. In the fifth, Carter Nash singled in Michael Roman before Keaton Zargham doubled in Kyle Toister. Michael Schwitalla followed with an RBI groundout to score Nash.

Palmetto took a 7-6 lead in the sixth as Toister singled in Nicholas Vizcaino, and Schwitalla doubled home Zargham and Nash.

Kendrick Pico got the win in relief for South Dade. Pico pitched two and one-third innings and allowed four runs. Manoah, who went 2-for-4 with a home run, two RBIs and three runs, earned the save with two innings of relief.