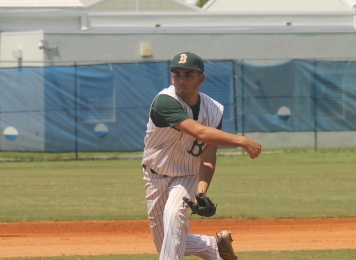 Marco Bolano went the distance for the Panthers.

In playoff baseball games, most of the time teams get very few chances to make something happen. When those opportunities arrive, it is the team that is able to capitalize that often survives as the winner. Such was the case in Wednesday’s Class 2A regional semifinal between Miami Christian and host Miami Brito.

Locked in a pitcher’s duel between the Victors JC Llasor and the Panthers Marco Bolano, both sides received very few chances to make an impact on offense. Thanks to a big fourth inning that saw some key hits come from the bottom part of the order, Brito emerged as the club celebrating a victory on the field at Florida Memorial University. Robert Hernandez had a two-RBI single and Christian Alvarez followed with an RBI single to help lead Brito to a 4-1 win.

The Panthers (15-11) advance to the regional championships, where they will host Boca Christian on Friday afternoon in a showdown that will also be played at Florida Memorial University. The Blazers advanced on the other side of the bracket after defeating Zion Lutheran on Tuesday, and now the two squads will face off for the right to advance to the FHSAA state championship next week at jetBlue Park in Fort Myers. Brito is the defending champions in Class 2A, and now the team has the chance to repeat that feat and add another state title to the school’s trophy case.

“We are going to be the only school with seven titles, so we just want to keep it going and get Lucky Number Seven,” Bolano said. “We’ll see what happens and we’ll do our best.”

Trailing by a run midway through the contest, Bolano got things going in the fourth when he lined a single just out of reach of a diving outfielder. After a flyout, Jan Hernandez drew a walk and gave way to courtesy-runner Daniel Castillo, and Richard Nunez was hit by a pitch to load the bases. With Llaser working the inside part of the plate, the Panthers adjusted to crowd the plate and tempt another hit batsman that could tie the game.

Instead, Robert Hernandez got a pitch he liked and he rolled it through the left side to drive in both Bolano and Castillo to put Brito ahead. Alvarez followed with a bouncer up the middle that brought Nunez in for an insurance run and a 3-1 advantage.

“Once Richard Nunez got hit and went to first base, Coach came up to me and told me to stay up close and if anything, take the shot and get hit,” Robert Hernandez said. “If not, keep on fighting it off and try to find the hole and try to get a hit. It feels great, and it has been a long time since we have made good plays like this, comeback plays. People were thinking we weren’t going to win this game, and people gave up on us. We showed them that we can and that we are ready to win the championship again. This title is not going to be taken away from us that easy.” 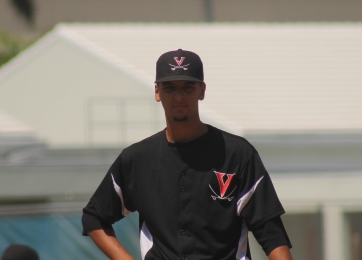 The Panthers added another insurance run an inning later. Luis Nieves reached on an error and Bolano delivered a shot to deep left field for an RBI double that allowed Nieves to come all the way around from first base to score. Bolano was gunned down at third trying to stretch the hit into a triple, but the damage was already done.

From there Bolano took care of the rest from on the mound. After a two-out single to Laz Gonzalez in the sixth, the senior right-hander retired the final four batters in order to close out the game and earn the complete-game victory. Although it got off to a rocky start, Bolano admitted that he knew he was going the distance on this day.

“The first inning started off good, but in the second inning they scored a run,” Bolano recalled. “It shouldn’t have happened, but it is part of the game. You just have to continue the game out by out. I was going to throw seven innings no matter what, and that was what I told them. I wasn’t getting out of it.”

The Victors (13-13) got on the scoreboard in the second. Laz Gonzalez led off with a double down the right field line and was replaced on the bases by courtesy-runner Brian Vieites. Jamie Gonzalez moved him to third with a sacrifice bunt, and Yoel Rojas drove him in with an RBI double on a rocket to deep right field.

With Llasor in control early, the Victors seemed capable to make that slim lead hold up. The senior right-hander attacked the Brito offense, and the defense dove and charged at every ball its way to back that effort.

“They played their hearts out. I know they left it out there on the field and they wanted to win very bad,” Miami Christian Manager Chris Cuadra said. “We fell short and we couldn’t hold the lead. We had it into the bottom of the fourth, and they scored three, and we couldn’t hit. We got that first one, but I believe you have to score more than one to win.”

In the end, adjustments at the plate proved huge for Brito the second time through the order. The team’s ability to find a way to get on base against Llasor was the reason why the Panthers will continue to play and chase another state title.

“He came out throwing well and he has thrown against us quite a bit over the years,” Brito Assistant Coach David Fanshawe said. “He started off throwing strikes and then he was able to do what he wanted to with us. The first time through the order he got us, and we adjusted the second time around. He was actually throwing first-pitch fastballs right down the middle of the plate, which falls out of our game plan. We like to take pitches and get into the pitch count, while drawing some walks. So the second time around the order we let guys swing away a little bit and make some things happen on the base paths.”

While the dream lives on for Brito, Miami Christian is left to look ahead to next year. The team bids goodbye to some key seniors, but also has a bright future for the season ahead.

“I had a small senior class; there are only five of them. But I couldn’t ask for anything more from my seniors, and especially JC,” Cuadra said. “I have had him since his freshman year and he has been my horse. I always go to him. My starting catcher was hurt and he only played one half of the year. Laz Gonzalez, one of my biggest seniors, he stepped up and he played behind the plate, at second, center and left field. Anthony Potestad was a newcomer and he did what he had to do. But I am very positive for next year. I have 12 juniors returning, plus whatever comes in.”