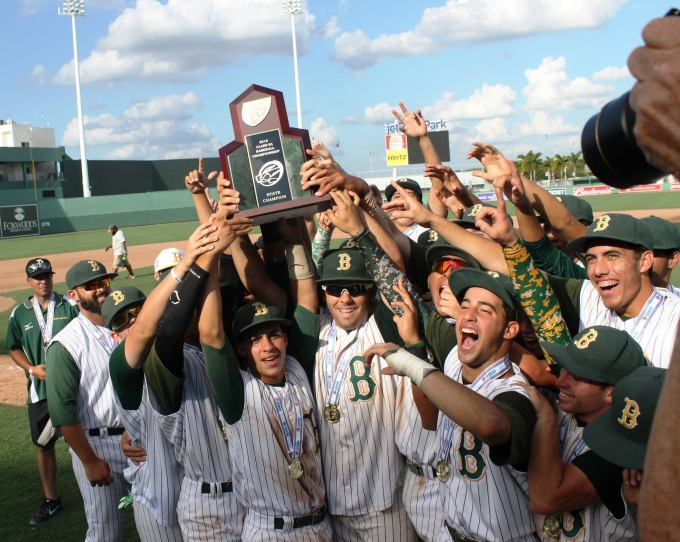 The 2015 Florida high school baseball Class 2A state championship trophy now belongs to the Panthers, following a big 12-1 victory over Bayshore Christian in Thursday afternoon’s title game. Brito claimed its second consecutive state championship, and its seventh overall in program history. It is also the second time that the team has won back-to-back crowns, having also accomplished that feat with its first two titles in 1996 and 1997.

“I am at a loss for words right now; I don’t really know what I feel right now,” Brito Manager Pedro Guerra said. “I am really emotional for this repeat. Those were tough years when we were not in the top four competing for a state championship, and we put a lot of emphasis on the kids for them to be here again this season. That was our objective all year was to come back this year and do it again. That’s why we were successful.”

From the beginning the Panthers (18-11) showed their poise and experience on the biggest stage. Brito jumped out to a 3-0 lead in the bottom of the first inning and never looked back from there. The team scored all its runs in the first three frames, putting things out of reach with a seven-run third inning. The game ended in the bottom of the fifth inning due to the mercy rule, which was also the second straight season Brito pulled off that feat.

“The first time I was here was when I was in eighth grade, and I felt real nervous,” Bolanos admitted. “I was just a little kid. But once you get to the plate for that first at bat and everything goes your way, you get settled in. To come back here last year and win, now it just felt like a regular baseball game. You just play to win.”

Right out of the gate the Panthers came out swinging. Freshman Alex Nino led off by depositing a bloop into right field, and easily reaching second base after the fielder was unable to make a play on the ball. Luis Nieves reached on an error on a sacrifice bunt attempt, and a perfectly-executed double steal worked to allow Nino to swipe home with the first run of the ball game. Nieves scored the deciding run later in the inning on an error.

As a freshman hitting out of the leadoff role, Nino feels honored that his team trusts him in that role. After moving up in the order to fill that important spot in the batting order, Nino has approached his job with great respect. He is always ready to do whatever the coaches ask him to do, and although he is comfortable there he admits he also felt the pressure to perform as expected.

“From the beginning of the season I started off as the ninth batter, and once they moved me up I had to do my job and put the ball down and play like Coach told me to,” Nino said. “That’s all I’ve been doing. I got a double in the first inning, and I hustle out every time. Every single time you have to hustle it out, and that was what I did and I got an easy double.” 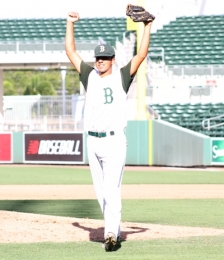 Brito used some fundamentals to help increase its lead in the second. After Robert Hernandez walked and both Christian Alvarez and Ariel Rocha reached on errors to push Robert home and put both runners into scoring position. Nieves then laid down a great sacrifice bunt on a suicide-squeeze play to drive in Alvarez, before Bolanos followed with an RBI single that plated Rocha to make things 5-0 in Brito’s favor.

“This year we did not have as much power as last year,” Assistant Coach David Fanshawe said. “We have a couple of guys who can really swing the bat, but we also knew coming into the season we would also be a small-ball club. Once we moved Alex Nino into that leadoff spot we just told him to hit the ball and run. We got guys on and we would bunt guys over, and things would happen. So we just adopted that style of baseball play, and it turned out well for us in the later part of the year.”

Brito loaded the bases in the third, before several big hits broke the game wide open. Nino had an RBI single for his second hit of the day, Nieves added a two-RBI single and Onelio Perdomo had an RBI walk. Catcher Jan Hernandez smacked a double with the bases loaded to drive in all three base runners to close out the scoring.

With the offense taking care of business on that side of the field, the Panthers’ pitching staff did the rest. Senior starter Christian Crowe tossed four strong innings to earn the victory, needing just 43 pitches to record the first 12 outs. The right-hander scattered four hits and a walk, surrendering one earned run while striking out three.

After transferring to the team this year from Naples High, Crowe was honored that his coaches would trust him to take the mound in the most important game of the season.

“I just want to thank Coach Guerra and David for believing in me, and I just want to thank them so much for taking me in for my senior year,” Crowe said. “I want to thank my teammates for getting my back and treating me like family. I have never had a family like this before and I am going to miss these guys so much.”

Jan Hernandez was another player who came to the program this season. He also beamed with pride and appreciation for how his teammates had welcomed him in this year, and how everyone makes each guy understand that they are all a part of it together.

“The most important thing is that, when I started this year I felt like family,” Jan said. “It really meant a lot to me. Once you do bad, they don’t really judge you. They just give you advice and they pump you up. This is something that I will never forget in my life, my first year here with Brito. I’m really proud to wear this jersey and this is something that I will always remember and that will always be in my heart.”

Brito now moves into a tie for sixth overall in the state of Florida for total team championships. The Panthers are locked in with Tate, which also has seven team titles. Part of that success has come thanks to the atmosphere within the program, and how every guy is appreciated for their contributions.

“We all play as a family,” Nino said. “Everybody who ever comes in here we treat them like they have been here forever, and like they are part of the family. That’s the one thing that this team has is we have a lot of heart, we go out with respect and we love each other.”

With six important seniors set to move on after this season, the torch is now passed to the younger veterans to continue that tradition and chase after a third straight state title next year. Thanks to the big lead, the Panthers were able to substitute many guys into Thursday’s action for a taste of what it feels like to compete in the state championship. Brito also got a few pitchers into the game to help close out the fifth.

“We got to play everybody,” Guerra said. “We played a tough schedule and we have more experience than they did, since obviously we were here last year. We prepared them throughout the year for that reason. We don’t play our opponent; we play the game.”